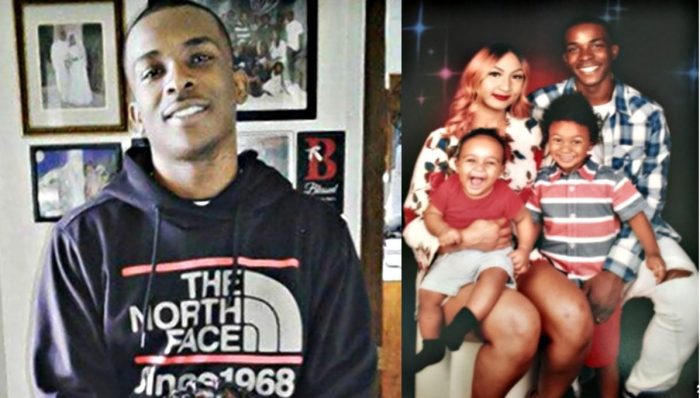 A picture of Stephon Clark (left) and a picture with him and his family (right): Clark’s fiancée Salena Manni and their two children, Aiden and Cairo. (courtesy photo)

Sacramento County District Attorney Anne Marie Schubert took a little over an hour to announce that her office will not file charges against police officers who shot and killed Stephon Alonzo Clark.

Two cops, Terrence Mercadal and Jared Robinet, shot and killed Clark, 22, in the backyard of his grandmother’s home in Sacramento on March 18, 2018. Seven out of about 20 bullets the policemen fired hit the former Sacramento High athlete from the back, according to an independent autopsy report conducted by the family.

The official police report says Clark was facing and approaching officers when they killed him. He was a vandalism suspect.

Schubert spoke during a press conference on March 2. Her presentation on the killing, resembled a courtroom trial without the judge and jury, Clark’s family members say. It included a number of details unrelated to the shooting almost a year ago.

Community members were outraged by the DA’s report on the victim’s alleged emotional state when the shooting occurred. They felt his past run-ins with the law and her attempt to paint the picture of a troubled and volatile young man should not have been the focus of her statement. 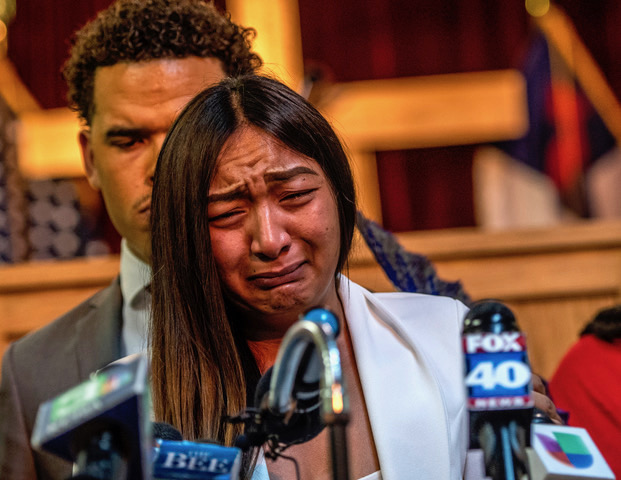 Salena Manni gives a tearful statement in response to the DA’s announcement of not charging police officers in the shooting of the father of her children Stephon Clark. (Photo by Russell Stiger/CBM)

Nearly five hours after the DA’s report, Clark’s fiancée and the mother of his two children, Salena Manni, 24, spoke to the press and supporters in his defense. Her father, Raj Manni and mother, Rothigian Mohammed accompanied her.

“The D.A. announced that the officers who shot my unarmed fiancé won’t face any charges, continuing the shameful legacy of officers killing Black men without consequences, and breaking my family’s hearts again, ” said Manni, reading a written statement at the news conference held at Harmony Church in Sacramento.

Manni laid out her case to the public, saying her family’s world has been” turned upside down.”

“My boys Aiden and Cairo have to grow up without their father and I have to continue on as a single parent.”

Now living in Los Angeles, Manni and her children arrived in Sacramento to the painful reality that the cops who killed Clark would not face charges. Meanwhile, the DA’s office had all but officially declared her deceased fiancé guilty with a stream of what she sees as irrelevant details.

Betty Williams, president of the Sacramento Branch of the NAACP, said Manni had previously expressed her thoughts to her after the long-awaited decision.

“She’s been going through this horrific grieving process that continues to go with everything that the D.A. put out there today,” Williams said.

Clark’s name joins an all-too-familiar list of Black men and boys, killed unarmed by police officers across the country. And after their deaths, their struggles or shortcomings become public, the centerpiece of investigations designed more to incriminate the victims than bring the officers’ who shot them to justice.

Rev. Shane Harris, president of the People’s Alliance for Justice traveled with Manni to Sacramento on the day of the announcement. He shared his perspective.

“What we saw was a kind of way to try to criminalize victims who cannot defend themselves,” Harris said.

Officers shot Clark while responding to 911 calls about a person breaking car windows in the Meadowview neighborhood where his grandmother lived. According to video of the incident, Clark was holding a cellphone when he was shot. Officers initially thought it was a gun.

Schubert added Manni to her equation, too, mentioning that she had called authorities about a domestic issue she and Clark may have had on March 16, two days before he died. She even shared information from private text messages exchanged between the couple.

Schubert described the young couple’s disputes, which she claims was the “central theme between the two.” 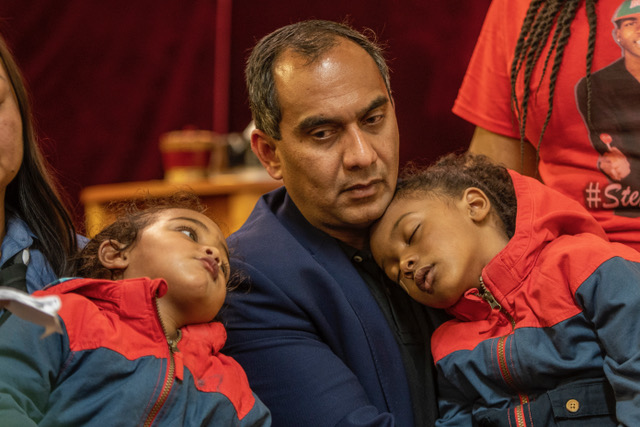 In January, the lawyers for the Clark family filed a $20 million wrongful-death lawsuit in the United States District Court for the Eastern District of California.

“How do I as your Mayor give voice to the pain that is so real and so raw in our community?” he said. “How do I as a relatively privileged White man let my suffering community members know they do not suffer alone — that their elected leaders are genuinely committed to change? How do I step into your shoes?”

On Monday, Harris and a group of African American ministers from around the state organized a rally in support of Manni, her sons and the Clark family. Earlier in the day, they delivered a letter to California Attorney General, Xavier Becerra expressing their disappointment with Schubert’s announcement.

“We are here to fight for what is morally right,” Harris told a gathering of Clark’s supporters at the state Capitol. “We are tired of seeing the Department of Justice and the State of California, and the Legislature in California not take moral leadership. Prosecute the two officers who killed Stephon Clark.”