They don’t give an Academy Award for this, but a Nigerian feature film, “Water of Gold,” made viewers significantly more likely to report corruption, according to a new paper co-authored by an MIT researcher.

That’s the main outcome of an innovative experiment designed to investigate whether media, such as films, can shift social norms and combat corruption. In the case of “Water of Gold,” in Nigeria, the film clearly can change behavior. Or at least one version of the film.

As it happens, “Water of Gold” is a “Nollywood” film (a loose term referring to the Nigerian film industry, the world’s third-largest), commissioned for the purposes of this experiment. The movie, set in the Niger Delta, is a sibling story about two brothers. One brother, Natufe, is a poor fisherman. But Natufe’s brother, Priye, leaves the Niger Delta, gets rich in business, returns home, and becomes a corrupt politician — to the dismay of Natufe, who becomes outspoken about endemic local corruption.

In one version of “Water of Gold,” Natufe and another local activist set up a number for corruption reporting via text message and report instances of it, in scenes lasting five minutes. The other version does not contain those scenes. As the researchers discovered, “Water of Gold” does boost corruption reporting among viewers — but only when it contains the extra 17 minutes showing the movie characters reporting corruption themselves.

“When we added the extra scenes in the film, we found we did get more people reporting,” says Rebecca Littman, now a postdoc at MIT and co-author of a new paper detailing the study’s findings.

Indeed, the movie, and an accompanying mass text message, spurred 240 people in 106 small communities to send in concrete, specific reports of corruption over a seven-month period, a marked improvement compared to two national campaigns that generated 140 reports per year, in a country of 174 million people.

By combining texting with the film, it becomes “less costly, and psychologically easier, to try this new thing,” Littman says about corruption reporting.

The paper summarizing the results, “Motivating the adoption of new community-minded behaviors: An empirical test in Nigeria,” is being published today in Science Advances. The authors are Graeme Blair, of the University of California at Los Angeles; Littman, a researcher at the MIT Sloan School of Management; and Elizabeth Levy Paluck of the department of psychology at the Woodrow Wilson School of Princeton University. Littman worked on the study as a graduate student at Princeton and is now a researcher in the Human Cooperation Laboratory, run by David Rand, an MIT Sloan professor.

To conduct the study, the researchers both commissioned “Water of Gold” and then rolled it out in careful fashion. Among the 106 places where the film was available, in 2013 and 2014, it was randomly determined whether viewers would see the “treatment” version of the film, with the corruption-reporting scenes, or the “placebo” version, which lacks them.

Both versions of the movie were also accompanied by a new system for reporting corruption via text message, which was displayed on the film’s packaging and at the beginning, middle, and end of the film. Soon after handing out the films, the researchers then sent out a mass text message blast in each community, to all subscribers of the major mobile phone provider, so people simply had to reply in order to report corruption.

In the paper, the researchers term the film a “norms intervention,” designed to shift public opinion about civic standards. The texts are what they term a “nudge intervention,” intended to reduce the perceived logistical difficulties of reporting corruption.

The alteration of norms generated by the film involves making people feel that reporting corruption is a routine part of being a good citizen. In case people have not encountered others in their community who speak out against corruption, the film steps in to provide an example of reporting malfeasance.

“If we can’t show them their neighbor doing it, we can show them these influential, famous people doing it too,” Littman says.

Nigeria would seem to provide a setting where anti-corruption campaigns have room to grow. In a public-opinion survey conducted as part of the research project, just under 80 percent of Nigerians said they thought the police, civil servants, and state governments were corrupt. About 83 percent of respondents said they were “angry” about having to pay bribes to conduct business, with 60 percent being “very angry” about it.

It is also no accident that the study focused on the Niger Delta region, where massive amounts of oil production have not been accompanied by an equivalently substantial investment in services and infrastructure for citizens.

Even so, the number of corruption reports the research experiment generated was significant compared to two four-year campaigns, running from 2011 to 2015, conducted by a pair of organizations, Integrity Nigeria and BribeNigeria.com, which combined to collect 385 reports.

“I think people were surprised that the campaign actually worked,” Littman says.

Funding for the project was received from an anonymous private donor as well as the Canadian Institute for Advanced Research. 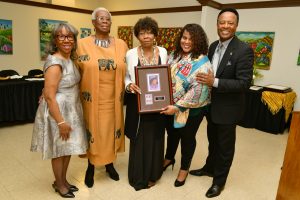