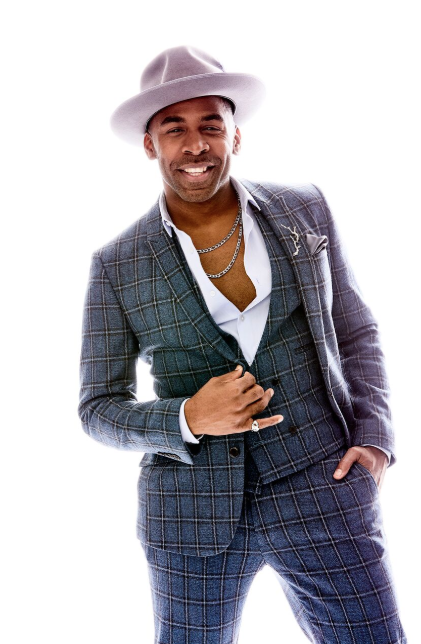 MAJOR. and please note the way this gifted pop, soul singer/songwriter spells his  name- sounds like honey dripping from a natural honey cone, pure and the way Mother Nature intended it to be.

MAJOR. who is classically trained credits his musical roots to the Christian church and indeed the richness of his sound does embrace this listener, at least, with a feeling of being blessed leaving me emotionally satisfied.  His single Why I Love You, which I listen to in a loop, was released last year and earned praise from living legends Stevie Wonder who described the song as “the wedding song of the year” and Patti LaBelle.  The single which was featured on MAJOR.’s debut album, I Am MAJOR., and released via BOE. Music Group and Empire, caught fire and industry notice earning more than 5 Million streams on Spotify and 6 Million on Apple Music.

Songwriter/singer MAJOR. is in a serious company, the single Why I Love You was produced by Harmony Samuels (Ariana Grande, Fantasia). Also on MAJOR.’s 12-track set is the anthem #ChangeRightNow, featuring Glee’s Amber Riley, as well as tracks featuring Kevin McCall and Mali Music.

Released this year he followed with a powerful single,  Honest which begs the listener to “hear” and “listen” and to learn to value truth. Powerful lyrics told by a passionate storyteller gifted with a smooth soulful tenor and soaring falsetto, this single again delivers a love song that feels modern and classic how MAJOR. combined the opposing styles, I can’t say but take a listen and weigh in, all links are below.

MAJOR. is a fascinating artist. Born and raised in Texas (Denton) he calls Houston home where he grew up in a  blended-family household of 10 siblings (13 total). He knew that music was his calling from childhood and graduated from the High School for the Performing and Visual Arts, and then received intensive classical training from Professor Steve Smith of The Juilliard School and Houston Grand Opera High School Voice Studio. From there he attended the Berklee College of Music, where his natural leadership skills served him well as Student Body President. After graduating he moved to Los Angeles to pursue an entertainment career.

MAJOR. I admit that I listen to your single Why I Love You on loop. I love it.  Describe your sound, please?

Well, I am classically trained but my roots are in the [Christian] church but the sound … my sound is pop-soul. It’s got the r&b and the experience about my journey.  I grew up in the church and it comes out in my sound .. you know … that soul, that expression, and pop because it’s a universal sound, very mainstream and connects cross-culturally but it’s very much inspired by culture.

Your music feels very full, like going to church.

In your opinion, as a songwriter,  what makes a good love song?

What makes a good love song? Well, I think it’s drawing from experiences that people can relate to. Drawing from a true place and also making certain that the song isn’t one-sided, that it involves both people. A lot of times we have these [type of] songs that are always talking about what they think or what they didn’t do or what they want to do but not really speaking to what you want and what you need or what I need or what I want.  That reciprocity is necessary for a really special long song.

Have any of your songs appeared in a movie or on a soundtrack related to a movie?

Yes. I have a new song in the movie “Night School” it’s called My Future, it’s on my first CD. I have another song in the film “Think Like A Man 2” called Baby, Baby come on.  I’ve been working really hard for a long time.

What’s next for you MAJOR.?

My new album hits everywhere, September 7th, it’s called EVEN MORE and it’s got some great music. I am excited. It’s a great collaboration again with Harmony [Samuels] whom executive produced this [EVEN MORE]. He [Harmony Samuels] executive produced the new Janet Jackson single Made for Now’.  That’s the same guy doing my album so I am really really excited. I believe that it’s going to blow so many people away and really touch a lot of hearts. So, I am happy.

What’s the significance of your name?

Thank you for asking. I spell my name [MAJOR.] with all capital letters and a period “.” at the end.

There is meaning behind me adding my name this way.  My first name is actually Major, it’s my first name and growing up, I was not a fan having such a different and unique name. I decided to embrace it once my mother explained her journey during pregnancy with me because she considered aborting me, twice, and on her way to the abortion clinic—both times—the tire went flat … completely busted.  She wanted to abort because she was embarrassed that she was having a kid out of wedlock but thank be to GOD, she decided to have me and she said, ‘if I name him Major, I pray that he makes a major impact on the world’.  That is why I choose to embrace it [MAJOR.]. Why I choose to capitalize every letter and to put a period there because it symbolizes me owning my truth and my power because that is how GOD made me.