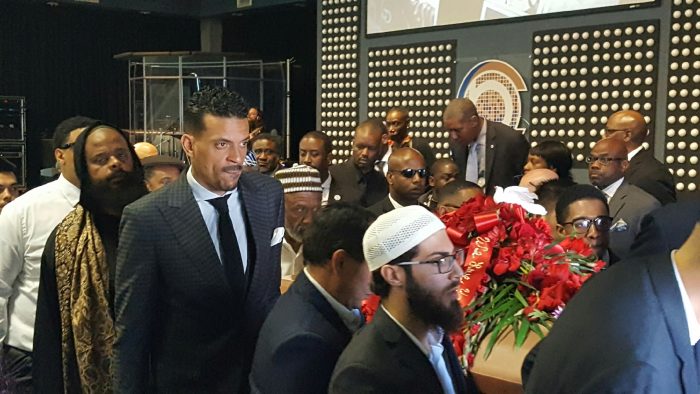 Stephon Clark’s memorial service held Thursday March 29, was a chance for both national and local figures to share their opinions about the latest police shooting of an unarmed Black man.

Hundreds gathered to mourn the life of Stephon Clark at BOSS Church in South Sacramento, CA. Clark was shot and killed by law enforcement officers that encountered him while responding to neighborhood complaints of car windows being broken on March 18. Clark was mistakenly believed to be in possession of a gun but was found only to be holding his cell phone.

Rev. Al Sharpton, president of the National Action Network, spoke at the memorial. He slammed the media for the way they were trying to frame the story.

“This is not Black versus White, this is right versus wrong,” he said.

He also took a swipe at White House Press Secretary Sarah Huckabee-Sanders who described Clark’s shooting as “a local matter.”

“This is not a local issue, it’s a national problem,” he said.  “A problem this president wants to ignore.”

Matt Barnes, a former NBA player, spoke after the memorial service. Barnes also organized a rally in Clark’s name. He said the issue hit home with him because he was a parent.

“I’m a father of two young boys, and I fear for their lives,” said Barnes. “Not only in the streets, but also behind the hands of cops.”

Julie Debbs, a Sacramento resident, said Clark’s death could serve as a unifying force in the black community. She noted that several local gangs had attended the funeral peacefully.

“Everybody came together today. This is beautiful. Maybe this will bring us all together as one,” she said.