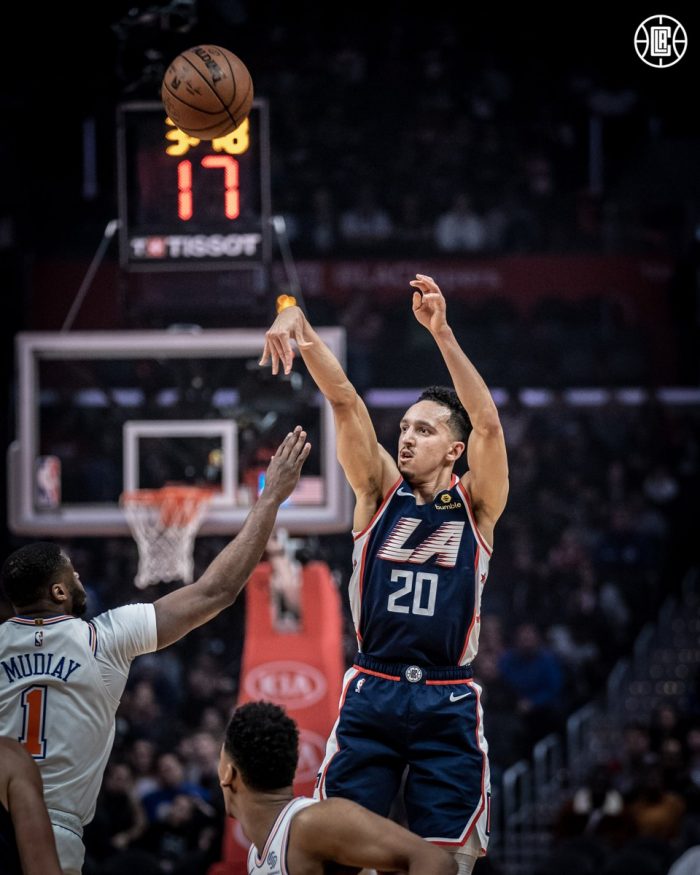 Landry Shamet is quickly getting accustomed to his new role with the Los Angeles Clippers and is putting the entire league on notice.

He caught fire and scored 18 of his 21 points in the opening 12 minutes of play and propelled the Clippers to a dominating 128-107 win over the New York Knicks at Staples Center Sunday afternoon.

Shamet tied the franchise record for threes in a quarter (six) and a half (seven) in just his ninth game played for Los Angeles.

“It was just free-flowing, and the ball was going in,” said Shamet who was acquired from Philadelphia last month in the Tobias Harris trade. “They were telling me constantly to keep shooting.”

“He was fantastic,” said Clippers coach Doc Rivers. “Our guys knew he had it going and made sure that he got the ball. That’s a good sign for your team when that happens.”

JaMychal Green and Shai Gilgeous-Alexander also finished in double figures with 16 and 15 points, respectively for the Clippers.

“We were in mud,” Knicks coach David Fizdale said. “No matter who I put out there they were just heavy-legged and just really out of it mentally. It was a total lack of competitive preparation.”

The Clippers led 82-46 at halftime, which was the second-most points in the first half in in franchise history. Los Angeles out rebounded New York 26-16 and forced nine turnovers through 24 minutes of play.

However, the Knicks did outscore the Clippers 32-19, thanks to making 5-of-11 shots from three-point range and 41 percent shooting from the field.

“I wanted to see what kind of spirit we’d come out with and if we could just set the goal to win the second half,” Fizdale said. “We did that.”

Harrell scored 10 points in the fourth quarter for Los Angeles and was the only player who cracked double figures.

With the win, the Clippers moved into seventh place in the Western Conference standings and will look to close out the month strong with a stretch of eight more home games remaining.