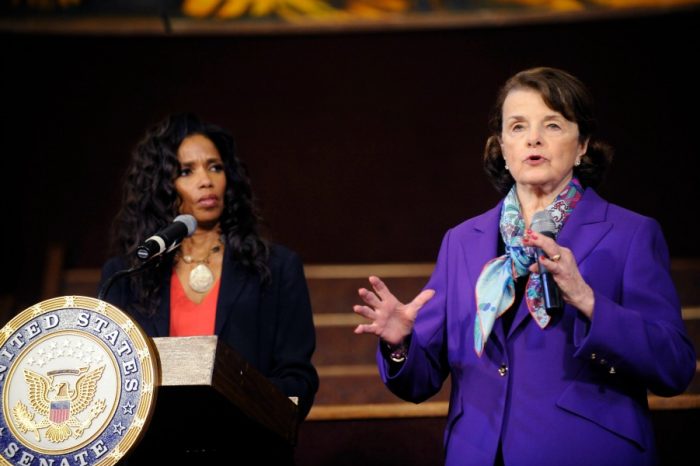 Amidst boos and jeers, Sen. Feinstein was repeatedly heckled at her town hall meeting, as critics accused the Senator of not doing enough to stand up to the GOP and President Trump’s administration.

At a rare public forum, a mostly full sanctuary at the First African Methodists Episcopal Church, in South Los Angeles, Sen. Feinstein stood witness, as angry constituents were unsatisfied with her responses to their questions.

Healthcare, Syria, and civil rights were among the issues that dominated the Q&A session.

Atty. Areva Martin, the event’s moderator, asked the first question. She spoke about the black community’s concern about police brutality and any progress made by the previous administration will be lost under the current US attorney general.

“Each and every one of us has to pay attention to U.S. Attorney General Jeff Sessions and hold him accountable for his actions,” responded Sen. Feinstein. “You must get to your Congressional representative and make them aware of your discontent. He’s a man from a tradition that preceded racial reconciliation. He’s not the President’s lawyer.  He’s the people’s lawyer,” she said.

There were also questions about the US Attorney lying to the Senate Judiciary Committee about his communications with the Russian government. Also someone inquired about the Trump presidency being under an investigation for its ties to Russia. 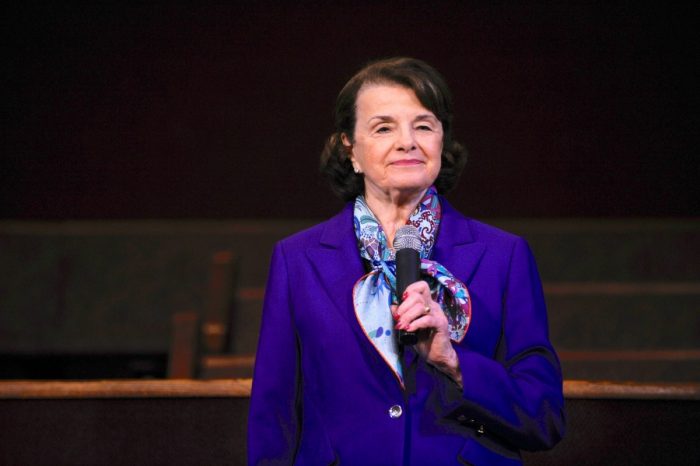 As the ranking member on the Senate Judiciary Committee, Sen. Feinstein assured those in attendance, that she is looking very closely at the Emoluments Clause, the US Constitutional clause, involving foreign support that some believe makes Trump ineligible for the role of US President.

The chemical attack in Syria earlier this month, that left more than 80 dead, was also on the minds of some who attended. It prompted a question from one woman about the senator’s stance on the U.S. missile strikes and the relief of suffering Syrian refugees.

Sen. Feinstein supported the U.S. missile strikes on a military air base in Syria: “This has become much more complicated. Russia and Iran demonstrating their influence. We have to take a more aggressive role. The time has come to end it.”

She heard loud boos when the Senator said she was “not there” on supporting complete single payer healthcare, and didn’t oppose President Trump’s missile strikes on Syria.

When asked about whether or not she supports Bernie Sanders’ single payer Medicare-for-All legislation, she said, “not at this stage.”

Her response drew a momentary heckles of disapproval from the crowd. She insinuating that Sanders’ Bill restricts the medical freedom of the American people and would give the  government jurisdiction to control everyone’s healthcare.

Throughout the meeting, the crowd seemed agitated by the Senator’s response to questions. She was often interrupted either by those opposing her or the individuals bothered by the disruptions.

Atty. Martin repeatedly reminded the ill-tempered audience to be respectful of one another and the Senator.

Questioners at Thursday’s event were chosen by a random drawing.

In an interview with reporters after the town hall meeting, Sen. Feinstein, whose term is up next year, refused to say whether she was running for re-election. She was elected to the Senate in 1992.

Overall, most of the attendees seemed supportive of Sen. Feinstein, greeting her with loud applause. She won cheers when she pledged to support what?  Depending on the Senator’s responses, many in attendance held up green and red “agree” and “disagree” signs.

It should be noted that critics have filled town hall meetings across the country to push members of Congress to contest President Trump on revieling his tax returns, his foreign policy, health care, and many other issues.

“We have an overwhelming problem that is the presidency  House and Senate are controlled by one party.  (This is a quote so I guess it has to stay but grammatically incorrect),The democrats will never have the votes for meaningful legislation unless we work across the aisle or bring about a new democrat majority,”  (Who is quote from ?) and the audience broke into cheers.  Paragraph needs revision)

As a ranking member of the Senate Select Committee on Intelligence, overseeing the nation’s 16 intelligence agencies, Senator Feinstein supports an independent commission to investigate the role of Russian interference into the 2016 election. I have no doubt that Russia interfered in our election.

The Senator expressed her opposition to this administration’s deportation strategy because it separates families and children. Sen. Feinstein is a co-sponsor of the so-called Bridge Act, which would allow at least 740,000 young immigrants who have gotten deportation amnesty and work permits under the Obama administration, to keep those benefits for three more years, if they are revoked. However, it’s unclear if the measure will pass through the more conservative House or GOP – controlled Senate.

An optimistic Sen. Feinstein says she knows how to get things done. “We must work together. You can yell and scream but that’s not enough. But public opinion and information does change something. And putting something together that can get votes even in a divided congress,” she said.

Sen. Feinstein endured, brushed aside the tension, and explained how her power was limited as a single senator in the minority party. J. Edgar Boyd, Senior Pastor First African Methodist Episcopal Church Los Angeles was encouraged by the turnout and not bothered by the irritable crowd.

“This was great,” he said. “This is how democracy should work. It wasn’t entertaining but informative.”

Most of all, he says it illustrates the responsibility a senator has to her constituents.  Steve Dunwoody, veteran and community advocate, agreed with the pastor. “It was great to see people engaged and address issues that are dear to themselves,”   he said.