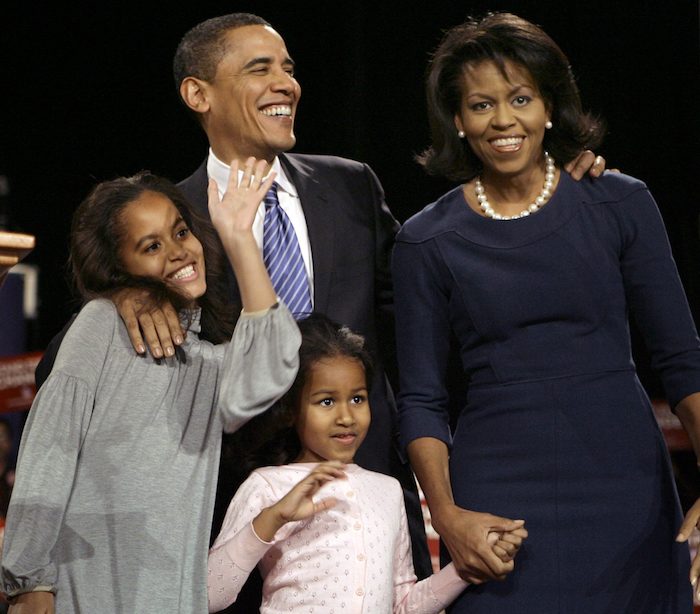 FILE – In this Jan. 3, 2008, file photo Democratic presidential hopeful Sen. Barack Obama, D-Ill., with wife Michelle and daughters Malia ans Sasha, waves to supporters at an rally in Des Moines, Iowa, after winning the Iowa democratic presidential caucus. President Barack Obama’s daughter Malia was just 10 and longing for a promised puppy when her family moved into the White House. She’s marked some of life’s milestones in the past seven years, and another one comes Friday: graduation from high school. (AP Photo/M. Spencer Green, File)

Like many people, the beginning of the year is a time when I take stock of my goals and how I’m feeling about my life in general. As I reflect upon all the things that happened over the last month, the unexpected election of Donald Trump as President gives me cause to pause and to evaluate not just my personal accomplishments and challenges, but also to examine our political process and the state of the local and national Democratic parties. As I do so, I have to acknowledge that I’m profoundly saddened that this will be the last month we celebrate with the Obamas in the White House. They have been the stalwarts of the Democratic Party for the last eight years and the end of their tenure in Washington will leave millions of progressives and democrats asking “who are we” and “where do we go from here?”

And while the Obamas may have used the office of the presidency to change the world, the pressures of the outside world didn’t change them. The Obamas stayed true to their selves, true to their roots. They may have lived in the Whitehouse but they kept their black identity —whether it was Barack going falsetto to sing Al Green’s Let’s Stay Together, or Michelle dancing to Uptown Funk on Ellen. Without a doubt, the Obamas brought soul to 1600 Pennsylvania Ave.

And through their sparkling example, the Obamas taught disadvantaged young people to reach for the stars—that anything is possible if you work hard enough and stay true to your convictions.

Eight years truly goes by in the blink of an eye, but in that time we got to witness something very special: We got to see a young, gifted black man, with his beautiful, accomplished wife at his side, lead and transform the country in remarkable ways that benefitted millions of Americans.

Obama’s critics will always try to rewrite history, but we must never forget the trying circumstances under which he entered office—with an ailing financial sector, high unemployment and an economy teetering on the brink of collapse. Today, because of his policies, we are in far better shape; we have a booming stock market that’s approaching 20,000, strong GDP and more than ten million new jobs added. And because of Barack Obama, 20 million more people have healthcare. Clearly, the brother did some work!

Michelle was not the President, but she redefined the term “boss lady.” She more than lived up to the role of First Lady—bringing the issue of child obesity into the spotlight, and emerging as a powerful speaker and advocate for progressive causes.

Not only did Barack and Michelle do good work, but they did it with class and dignity—even while being subjected to vicious personal attacks. But not once did they stoop to the level of their angry, ranting and racist detractors. As Michelle famously said, “when they go low, we go high!”

But more than just competently doing their jobs, the Obamas showed America what we rarely see on television or in the movies—a classy, highly educated black couple deeply in love. We got to see them gazing into each other eyes while dancing at the inaugural ball. Countless times in public we saw them hold hands and exchange tender touches of affection. We got to see them work as a team, as equals, he needing her as much as she needed him. And, most incredibly, we got to watch them raise two beautiful, intelligent daughters—all while living inside a Washington fishbowl.

Saying goodbye to a person or thing that we love is always difficult, but we can take solace in the following words of wisdom: “Don’t cry because it’s over. Smile because it happened.”