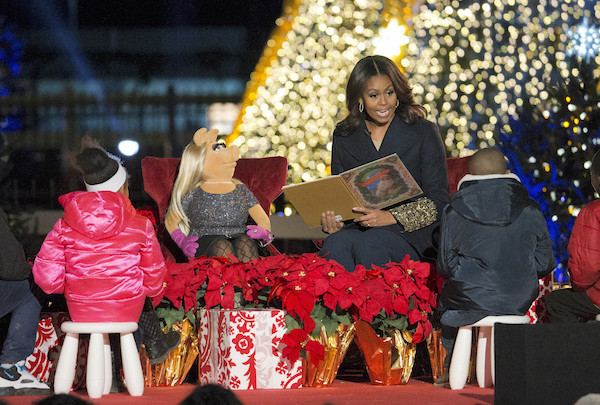 FILE – In this Dec. 3, 2015, file photo, first lady Michelle Obama with Miss Piggy, left, read ‘Twas the Night Before Christmas for children on stage during the National Christmas Tree Lighting ceremony at the Ellipse in Washington. When Michelle Obama considered the daunting prospect of becoming first lady, she purposely avoided turning to books by her predecessors for guidance. Instead, she turned inward. (AP Photo/Pablo Martinez Monsivais)

One of Oprah Winfrey’s favorite sayings is “success is when preparation meets opportunity.” Over the last eight years, we’ve seen the living, breathing embodiment of that motto in our fabulous First Lady, Michelle Obama. Like a NBA baller who shines on the court, Michelle didn’t become the dynamic force we see today without a lot of training and hard work. Michelle prepared for the role of First Lady by first learning street smarts while growing up on the Southside of Chicago. She continued with an education at America’s best Ivy League Schools where she earned an undergraduate degree from Princeton, and a law degree from Harvard.

In fact, it was at Harvard Law School that I first met the future Ms. Obama, then known as Michelle Robinson. I had the pleasure of working very closely with her on a number of projects, including an African-American alumni conference, and the Black Letter Law Journal. Like most Harvard law students, Michelle was very hard working, but even then she was particularly passionate about raising issues of importance to African-Americans.

In those early days, you could see her steely determination to succeed, and make a difference in her community, but no one knew at the time that she would go on become a historic figure— the first African-American First Lady.

Since our time together at Harvard, it has been my great pride and joy to watch Michelle flourish. I’ve been honored to work with her on causes that were immensely important to both of us, including co-hosting a fundraiser for her in Pasadena that brought together an array of amazing, accomplished women. It was an incredible honor for me personally and professionally to raise money to assist in the re-election of President Obama, and to be a part of history in bringing together hundreds of women to acknowledge and celebrate our First Lady.

And there has truly been much to celebrate. As First Lady, Michelle has been a powerful speaker and advocate for issues affecting women and children. In 2010, she raised awareness of childhood obesity through the “Let’s Move” campaign. She next launched the “Reach Higher” initiative, a program that encourages students across America to take charge of their futures by continuing their education past high school—either via professional training, at a community college, or at a four-year college or university. And finally, through programs such as “Let Girls Learn,” she addressed the obstacles that prevent young girls from attaining a quality education and achieving their dreams. 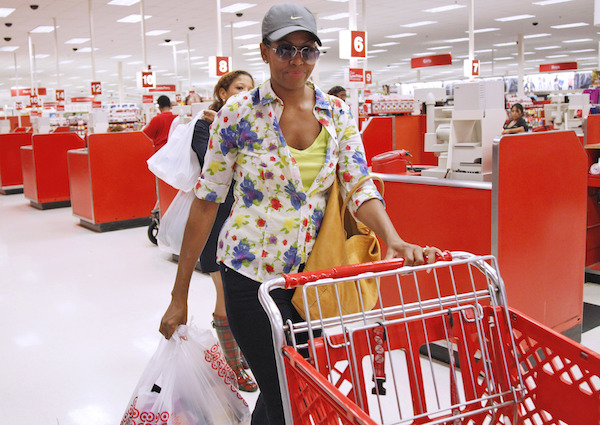 FILE – In this Sept. 29, 2011, file photo, first lady Michelle Obama, wearing a hat and sunglasses, stands in line at a Target department store in Alexandria, Va., after doing some shopping. When Michelle Obama considered the daunting prospect of becoming first lady, she purposely avoided turning to books by her predecessors for guidance. Instead, she turned inward (AP Photo/Charles Dharapak, File)

But where Michelle has been the biggest inspiration to me, and millions of other ladies around the world, has been through her bold example of how to be true to yourself and comfortable in your own skin. When Michelle became First Lady, she didn’t bow to the pressures of conformity and become a traditional presidential spouse. Instead, she brought flavor to the Oval Office. Instead of inviting only mainstream, vanilla type acts to the Whitehouse, she brought in Beyoncé and Jay-Z; She showed that a first lady could have swag—that you can rap in carpool karaoke, get down to Uptown Funk on Ellen, shop at J Crew and add extensions to your hair, and still slay at a state dinner in your black mermaid off the shoulder gown!

Michelle wasn’t ashamed of showing a black woman’s curves. She broke the musty First Lady fashion mode by wearing sleeveless dresses, while showing off impressive, well-toned arms. She showed that you can be classy and dignified, and still give your husband props with a congratulatory fist bump. She demonstrated that as a powerful woman you can be all things— wife, mother, partner, Harvard trained lawyer—without sacrificing your personality. Most of all she showed you could be one of the most scrutinized women in the world, but you don’t have to give up being authentically black.