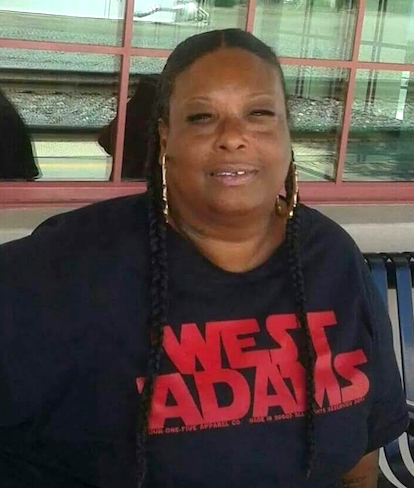 Gangs remain a constant threat for many youth in inner city neighborhoods, but in the West Adams area of South Los Angeles, a non-profit organization called Sistas Working Against Gang Violence (S.W.A.G.V.) is on a mission to prevent young people from joining gangs.

On July 31, S.W.A.G.V. members gathered at Loren Miller Park to give away backpacks and school supplies to children, who were also treated to face painting and danced to the precision sounds of the Drummers with Attitude (DWA) drill band.

“Some of the children here have fathers who are currently serving lengthy jail sentences or who were murdered in the streets by rival gangs,” said S.W.A.G.V. founder Carolyn “Bubbles” Clark-Hamilton.

Clark-Hamilton is no stranger to gang life. She said she once roamed the streets in the West Adams area as a member of the Rolling ‘20s gang.

“I witnessed several homies getting shot and killed in drive-bys. I was shot and stabbed and I even got hit by a car,” she said.

Clark-Hamilton survived, but her life continued to spiral out of control after her parents died ten months apart.

“I was devastated and started using drugs,” she recalls. “I finally checked myself into recovery. But I decided to go back to my ‘hood to help young people stay out of gangs.”

“I believe God handpicked me and pulled me out of the gang life so that I could return to my old neighborhood and make a difference,” said Clark-Hamilton, who has also traveled to Little Rock, Arkansas, Somerville, NJ, and New York where she has saved young lives through her gang intervention work.

Other attendees at the event revealed that their lives were forever changed by gun and gang violence.
Springlean Thompson, the cousin of Clark-Hamilton, remembers growing up with members of the Blackstone gang in the West Adams district. 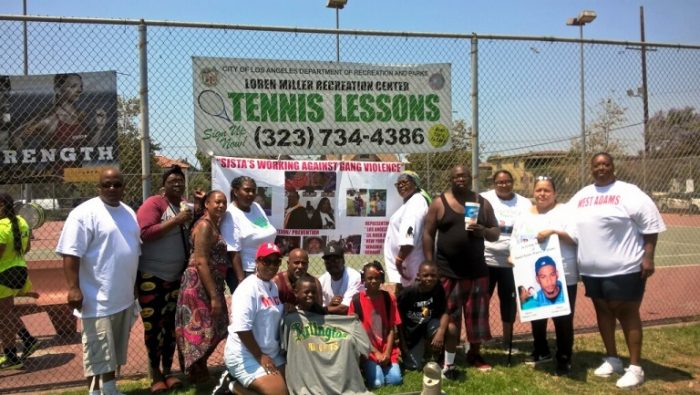 “I was raised in foster care, so they were like family,” recalls Thompson, who said she was 14 when she started hanging out with the Blackstones. “We barbecued and had fun. I was looking for someone to belong to. I would run away, hang out at the park with the Blackstones and sell drugs.

Thompson soon found herself caught in a revolving door at juvenile hall, but she always returned to her old ‘hood.

“Quite a few people I knew from the Blackstones got killed,” recalls Thompson, who said she has a “trunk full” of obituaries. “My friend Monique, who lived across the street from me, was shot and killed when she was 23. She was just in the wrong place at the wrong time.”

Thompson said she could have easily become a victim of the streets. “God had his hand on me all the time because he didn’t let me completely slip into that lifestyle,” she said with a trace of awe.

Thompson now works with Clark-Hamilton as an advocate with S.W.A.G.V. “We want to reach out to the kids before they make the mistake of joining gangs because the gangs recruit them at such young ages,” she pointed out. “Our goal is to reach them while they are still babies.” Thompson added that it is not unusual for youth as young as 10-years old to carry guns.

Several mothers attended the event whose sons’ lives had been cut short through violence.

“My 18-year-old son Daniel was murdered in 2011,” recalls Frances Williams, who, with her aunt, Shirley Leyva, started the Daniel and Alex Memorial after their sons were killed.

Williams recalls that her son was part of a tagging team. “He was walking in the Pico-Union area in Los Angeles. A white Blazer car with no license plates drove up and blocked the intersection where my son was standing. A video from a nearby store caught them exchanging heated words back and forth.”

Williams said the Blazer drove away but made a U-turn. “The car drove up to my son and someone leaned out of the car and shot Daniel once in the head.”

Williams is still haunted by that fateful night.

“We couldn’t find Daniel, so we called the police and they said they had a John Doe at the hospital. I rushed to the hospital and it turned out to be Daniel. There was blood everywhere. I screamed and the nurses told me I had to leave.”

Williams said that after two days of being hooked up to machines in the hospital, the doctors declared that her son was brain dead. The perpetrator who killed him was never caught.

“I miss his smile and his jokes,” said Williams sadly, “He would take me out to eat and to the movies. Daniel’s killing was senseless,” Williams reflected. “I don’t understand what these young men get out of shooting and killing people.”

Rev. Eduardo Vickers, a member of First AME’s Beyond the Walls ministry, theorized that the senseless killings by young black and brown men were tied to low self-esteem. “If you look in the mirror and you don’t like the person staring back at you, it’s easier to kill a person who looks like you,” he observed.

Leyva cried as she remembered her son. “Alex was killed on May 4, 2013,” she said, “He was a good kid. He had finished school and he worked at Pet Mart as a groomer.”

Kenneth Smith, a former gang member and co-founder of the violence reduction and reentry program Second Call, grew up with Clark-Hamilton as a member of the Rolling ‘20s. He joined the gang when he was 10 years old.

“There’s a lot of black-on-black and Hispanic-on-black shootings happening right now,” added Smith, who said that he and gang interventionist Skipp Townsend founded Second Call in 2005.

“Our goal at Second Call is to try to save lives,” said Williams, who said Second Call developed a 16-week program to teach at-risk youth life skills ,job readiness, anger management and decision making. After completion, many of the young men and women find jobs in construction or electrical work. “We offer the young men hope.”

Clark-Hamilton’s cousin, 16-year-old filmmaker and activist Marisa Umeh, added, “I’m really proud that ‘Bubbles’ is giving back to her community. It is especially imperative that outreach is done now considering the recent shootings occurring across the country. Now, more than ever, we need restructuring and a sense of community and
that is what my cousin tries to create through S.W.A.G.V.”

Clark-Hamilton said that she is committed to her goal of saving young lives through gang intervention.

“If I could save the life of one child, I feel that I‘ll be saving the lives of hundreds– because you never know how much damage that one child could do,” she said.