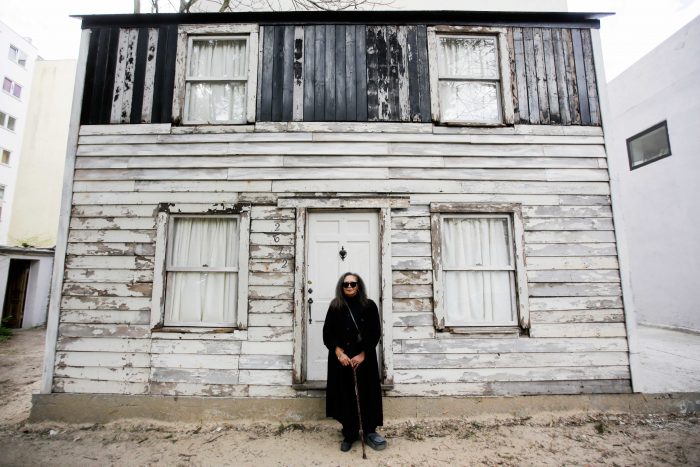 In this April 6, 2017 file photo, Rhea McCauley, a niece of Rosa Parks, poses in front of the rebuilt house of Rosa Parks, in Berlin. McCauley donated the former Detroit house of Rosa Parks to American artist Ryan Mendoza who has taken apart the Michigan house that Rosa Parks once lived in and rebuilt it in the German capital, to raise awareness about the late civil rights activist and her legacy. Mendoza now has brought it back to America earlier this year, and is working to reassemble it for a brief showing on Easter weekend. (AP Photo/Markus Schreiber, file)

The house where Rosa Parks sought refuge after fleeing the South amid death threats is scheduled for auction next week with a minimum bid of $1 million.

Auctioneer Guernsey’s plans to put the house up for auction July 26 in New York City, and has set a pre-auction estimate of $1 million to $3 million. It’s part of an auction that will feature several other items related to African American history and culture.

Parks moved to Detroit in 1957, two years after refusing to give up her seat on a bus to a White passenger in Montgomery, Alabama. Her family says Parks stayed in her brother’s tiny wood-framed house with 17 other relatives.

The house was going to be demolished by the city of Detroit when it was rescued by Parks’ niece, Rhea McCauley, and a Berlin-based American artist who took it apart and shipped it to Germany. Artist Ryan Mendoza rebuilt it in his yard, turning it into a work of art.

In Berlin, it attracted international attention and a steady stream of visitors interested in learning more about Parks and her importance in the civil rights movement. It was shipped back across the Atlantic Ocean earlier this year to be displayed in Rhode Island. It’s now in storage in Massachusetts.

The house also includes ceramic sculptures of furniture that was in the home when Parks stayed there.

Proceeds from the sale will be split between Parks’ family and Mendoza, the auction house said. Guernsey’s will also auction bricks from the home’s chimney, which had to be dismantled for the project.

Mendoza has said that he wants the house to end up in the hands of somebody who loves Rosa Parks and who wants to display it publicly. The house has become a way to tell the story of how redlining and segregation affected Black communities in America, he said.

“This is a way to save this chapter of Black oral history,” Mendoza said.