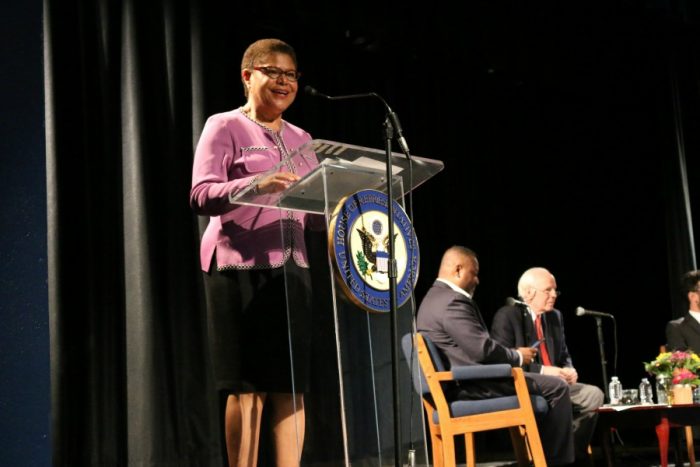 For Rep. Karen Bass (D-Calif.) there is no special art to the congressional recess town hall meeting.

While Congress was in recess last week, some representatives, including California Rep. Karen Bass, used the break to hold town hall meetings.

An overwhelmingly supportive crowd of about 1100 people, turned out Wednesday for the town meeting in Culver City.  Daily revelations about whether or not Russia interfered in the 2016 US elections, has most Americans on edge. Rep. Bass used two high profile experts to discuss their perspective on presidential power in this unprecedented time.

“People are desperate for information,” say Rep. Bass. “They are panic fearful and want to understand.”

Dean and Nance were informative and entertaining which included several applause breaks.

But Dean, who was charged with obstruction of justice for his role in Watergate, said Nixon and Trump are authoritarian personalities. “Nixon was much better prepared for the presidency than Trump. I’m troubled by how unprepared Trump is as US President. It worries me when he learns what you can do as President,” he said.

Nance agreed but offered a different perception on the Trump administration.

“Everyone in this room is here because some norm is out of wack. This administration seems to hate America. How can they call themselves patriots when they love a KGB Director,” said Nance.

He adds, the Russian intelligence agency, the Federal Security Service (FSB) is its predecessor, the KGB.

“If I change the letters of the CIA to LLN, does the CIA disappear? The person who may be responsible for hijacking an American election was a KGB officer, Vladimir Putin,” said Nance.

Russia has repeatedly denied interfering in the U.S. election but Nance is not buying it.

“I’m not a democrat or republican first, I’m a patriot first,” he said.

Not everyone in attendance was in agreement with Nance.

Arthur Schaper, Los Angeles Republicans For Trump, used his turn at the mic, during the Q&A period to offer a suggestion to Nance.

“If you are an American patriot, you should be donating proceeds from your book to the family of Jamiel Shaw, Jr. who was killed by an undocumented immigrant.”

Questions were thoughtful, passionate and personal.

At times, Bass seemed caught between a desire to placate attendees who had other contentious issues such as homelessness and fair employment for African Americans. 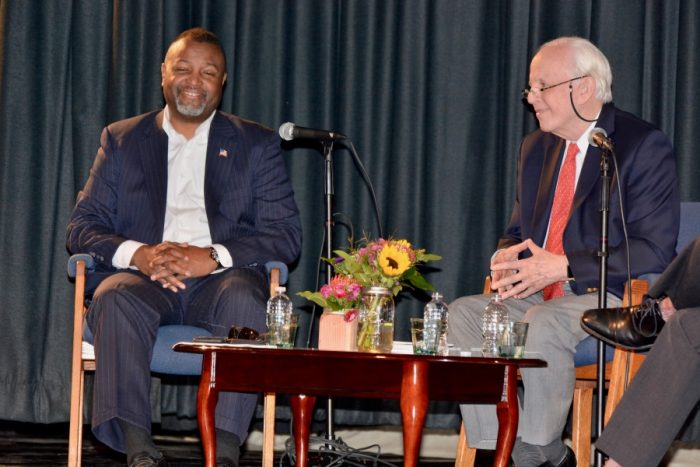 The evening was not without drama, as a homeless advocate and a recently unemployed women insisted Rep. Bass answer their questions regarding African American homeless and racist hiring practices in Los Angeles.

Rep. Bass response was calm yet stern. “I care very deeply that African Americans are unemployed. I’m also concerned about the growing homeless population. I do not believe that qualified African Americans are being overlooked for jobs because of undocumented immigrants. I believe that institutionalized racism is pitting people of color against one another,” She said.

The crowd responded with a gracious applause. In a year when congressional town hall meetings have often turned angry, Democratic Rep. Bass is among those congress members, who are adventurous enough to take on all comers.

Some of Rep. Bass’ Republican counterparts have heard from angry crowds of opponents of President Donald Trump’s at town hall meetings. Aggressive hectoring, reducing many town hall meetings to shout-fests, has become the headline these past few months.

Ordinarily, Spring is time of year when people are in the best of mood — the April recess is here, which usually brings a few friendly, sparsely attended town hall meetings, and then the attendees happily return home early for family dinner. But not this year, as politicians are facing large, well-organized crowds who are out for blood.

That was not the case at this town hall.

“I love town halls and I do them all the time. I don’t mind the rowdies. Some of my republican colleagues are not use to doing them.

She admits about four people were not happy tonight.

“The republicans never planned on taking power completely. Now they are driving the car. They may want to do a lot of things but they haven’t succeeded so far.”