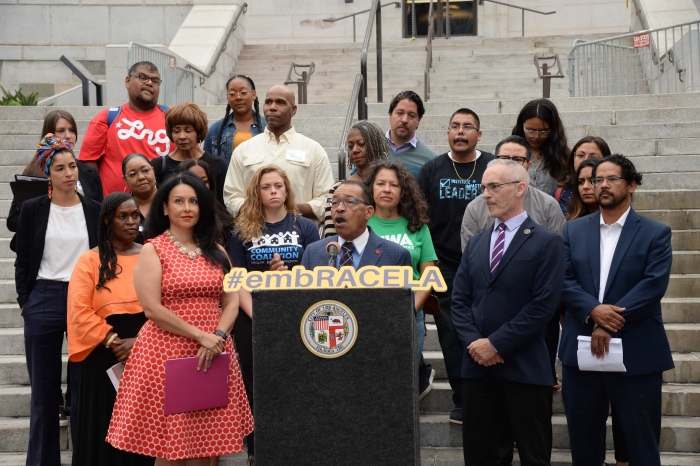 A diverse group of L.A. City Council members, along with activist group Community Coalition, declared September embRACE LA Month, highlighting the importance of healthy race relations in the city. Now that the month-long conversation has been had, organizers of the event are hoping to move toward creating an Office of Racial Equality here. This, they said, would help strengthen inclusion for L.A.’s most marginalized communities, who often have the least access to resources.

The month-long event called for community members of all races to engage in conversations about race and racism. Said facilitators, who included Council President Herb Wesson, racism has been prevalent here for decades, but the new Whitehouse administration, headed by President Donald Trump, has helped to exacerbate the situation in Los Angeles and across the nation.

“Today, we are living in the Divided States of America with a President determined to pit us against each other by either our political affiliations or often, simply by the color of our skin,” Wesson said during a kickoff for the event.

“These divisions have been exacerbated by Trump, but did not start with him. Enough is enough – we must once and for all address the systemic racism in our country and face it head on. The hill is big but step-by-step we can reach the top. The first step is to start the conversation – with those who have a different perspective than you, with different life experiences, and make an effort to listen and understand each other. That is how we strengthen our community. We are providing that environment with embRACE LA, which can be replicated throughout the country. We can build not only a better city, but a better country—united we can stand—but it starts in our neighborhood, district, and city.”

“The result was 1,500 conversations, each driven by our core principle: we cannot heal what we will not face,” they said.

“In Los Angeles, we speak more than 200 languages and come from more than 100 different countries. This diversity of people and unique experiences provides a fitting landscape to engage in such critical conversations. There is truly no better city to take on the challenge of an open, honest and encompassing conversation about race.”

Currently, Los Angeles is made up of about 49 percent Latinos, 28 percent White, 12 percent Asian, 9 percent African American and about 2 percent “other,” according to a 2017 report by the Advancement Project : “Race Counts.”

“The powers that be want us divided and isolated from one another instead of coming together to talk and recognize our shared experiences and values,” said Alberto Retana, president and CEO of Community Coalition. “embRACE LA is the antithesis to those calls for division. We can’t address the deep-rooted racism in this country if we’re not prepared to discuss it in meaningful ways.”

Various conversations took place at a variety of venues throughout the city, culminating with a dinner in each council district. Throughout 2019 and beyond, embRACE LA partners will continue working to improve the conditions of Angelenos most at risk of inequities in Los Angeles, they said. To learn more visit www.embRACELA.org.