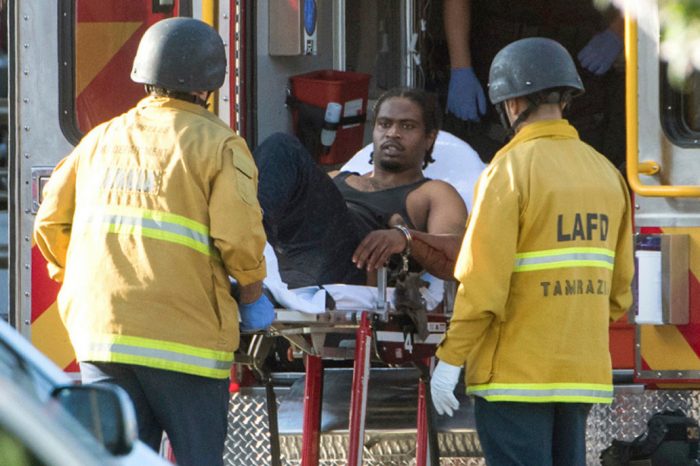 The bullet that killed a Silver Lake Trader Joe’s assistant manager during a police shootout with a man who took more than a dozen people hostage inside the store was fired by a police officer, not the suspect, Los Angeles police Chief Michel Moore confirmed today.

“This is a heartbreaking reminder of the split-second decisions that officers must make every day,” an emotional Moore said during a morning news conference. “And it is also a sobering reminder of the destruction a lone individual with a handgun can create.”

Melyda Corado, 27, was killed around 3:30 p.m. Saturday when a man suspected of shooting his grandmother and girlfriend in South Los Angeles crashed a car in front of the Trader Joe’s market at the end of a police chase and fled inside, allegedly while exchanging gunfire with pursuing officers.

The suspect, Gene Evin Atkins, 28, was charged Tuesday with 31 felony counts, including murder. Even though he did not shoot Corado, Atkins was charged with her killing because he allegedly set off the chain of events that led to her death. 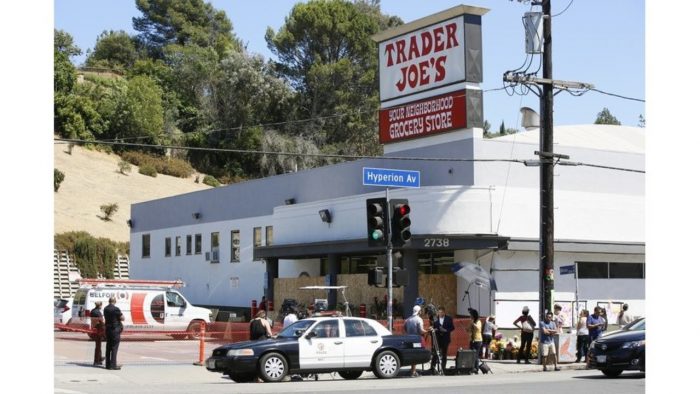 The standoff took place at the Trader Joe’s on the 2700 block of Hyperion Avenue. The suspect, Gene Evans Atkin, will be charged with 31 felony counts including murder. (AP photo)

Atkins allegedly shot his 76-year-old grandmother, Mary Elizabeth Madison, as many as seven times and shot a 17-year-old girl around 1:30 p.m. Saturday at his grandmother’s South Los Angeles home in the 1600 block of East 32nd Street. He then allegedly kidnapped the teenager and drove off in his grandmother’s 2015 Toyota Camry. Police spotted him in Hollywood, sparking a chase in which Atkins fired shots at pursuing officers through the rear window

of the Camry, Moore said. A short time later, Atkins crashed into a light pole outside the Trader Joe’s in the 2700 block of Hyperion Avenue.

“As Atkins exited his vehicle, witnesses reported they observed Atkins shoot at the officers. The officers exited their vehicle and returned fire as Atkins ran towards the entrance of Trader Joe’s,” Moore told reporters.

Moore said the two officers — one a six-year veteran, the other a two- year veteran — fired a total of eight shots in return. One of them struck Atkins in the left arm, but he continued running inside. Another struck Corado, traveling through her arm and into her body, Moore said. The woman managed to stumble back inside the store after being shot, collapsing behind the manager’s station.

She was carried out of the business by others in the store, but paramedics were unable to save her. 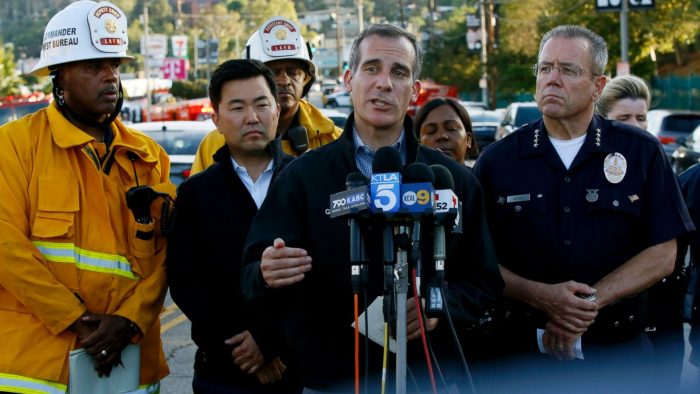 The police chief said it is “every officer’s worst nightmare, to harm an innocent bystander during a violent engagement. I spoke to both of these officers this morning. They are devastated. They were devastated in the immediate aftermath of this event — that a person died in their efforts to stop Atkins.”

But Moore — dealing with the first high-profile officer-involved shooting since becoming chief at the beginning of July — stood behind his officers’ actions, urging people to put themselves in their shoes and reflect on how they would have reacted in the same situation, with shots being fired in their direction.

“As chief of police, I am sorry for the loss, this tragic loss, not just to the Corado family, to her father, brother, (but) to her friends, to her work colleagues at Trader Joe’s,” Moore said. “This has been a devastating ordeal. On behalf of myself, and the men and women of this department, I want to express my deepest condolences and sympathy to her family and to everyone who knew her.”

The Los Angeles Police Protective League, the union representing LAPD officers, issued a statement expressing sorrow for Corado’s death, but saying the officers faced an “impossible choice” between opening fire or allowing an armed suspect to run into a crowded market.

“While it is easy to second guess the split-second decisions officers are forced to make when bullets are flying at them, our officers made the right call to try and protect as many innocent people as possible,” according to the union.

Moore said Atkins fired additional rounds at police from inside the store, but officers did not return fire. As many as 40 people were believed to be in the store when he initially ran into the market, police said Saturday.

Several employees and customers were able to escape from the store, while others were released by Atkins at various times before he surrendered to SWAT officers around 6:30 p.m. Saturday after about three hours of negotiations, according to the police chief.

Along with the murder charge stemming from Corado’s killing, Atkins was charged with trying to kill his grandmother and the 17-year-old girl – the latter of whom was rescued by Los Angeles police officers from the passenger seat of the Camry outside Trader Joe’s. The teen, described by police as Atkins’ girlfriend, was shot once in the head and was listed in fair condition. 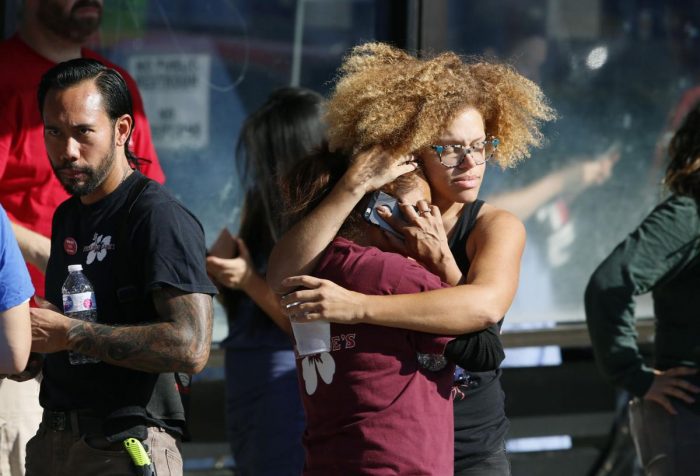 A GoFundMe page has been set up to help cover her funeral expenses. So far the page has raised more than $33,000 as of early Tuesday afternoon. (AP Photo)

Atkins was also charged with four counts each of attempted murder of a peace officer and assault on a peace officer with a semiautomatic firearm, along with 13 counts of false imprisonment of a hostage.

The other counts against him include fleeing a pursuing peace officer’s motor vehicle while driving recklessly, grand theft of an automobile, driving or taking a vehicle without consent, discharge of a firearm with gross negligence, shooting at an occupied motor vehicle and assault with a firearm.

Los Angeles Superior Court Judge Gustavo Sztraicher ordered Atkins to be held in lieu of $1.87 million bail pending his arraignment, which was postponed to Aug. 14 in a downtown Los Angeles courtroom.

He could face a life prison sentence if convicted as charged, according to the District Attorney’s Office.

The Trader Joe’s store has been closed since the shooting, but a memorial of signs and flowers in memory of Corado continued to grow outside the building. A GoFundMe page set up to help cover her funeral expenses had raised more than $33,000 as of early Tuesday afternoon.

Atkins’ cousin, Charleo Egland, told City News Service she didn’t know exactly what prompted the initial shooting in South Los Angeles, but said the grandmother did not want Atkins’ girlfriend in the home, and that likely led to a fight that prompted the shooting.

Another cousin, Deshon Hayward, said in a statement Monday to ABC7 that Madison, who was hospitalized in critical condition, “is doing good and is in good spirits.”

“She has a long journey ahead but everything is looking good,” he said. “We would like to send our deepest condolences to everyone that was affected by this horrible tragedy.”

Margaret Stewart of the Los Angeles Fire Department said paramedics treated 10 people at the scene of the Trader Joe’s, including Atkins, his girlfriend and Corado. Four people were hospitalized with minor injuries and three others were evaluated but declined to be taken to hospitals.

At the Tuesday morning news conference, Moore released dramatic body- camera and dashboard-camera video of the chase and the shooting outside the Trader Joe’s to give a “snapshot” of what happened. He said a more comprehensive video would be released within 45 days of the shootout, under a new policy recently mandated by the Police Commission. A final report would be issued sometime after that, which would include video and written materials.

He conceded that the video will be closely analyzed by the community and become the topic of discussion by critics who might question the tactics. But he again asked people to ask themselves, “What would you have done?”

Mayor Eric Garcetti, who is traveling out of the country, issued a statement saying: “Saturday was a dark day for the family of Melyda Corado, and it is our responsibility to shed light as quickly as possible on what happened. Melyda’s loved ones are entitled to answers — and Angelenos deserve complete transparency in understanding the full circumstances of her death.”

There was no immediate response from Corado’s family. Her brother, Albert Corado, retweeted posts Tuesday morning about Moore’s announcement, but did not respond to the news that it was a police officer who shot his sister.

On Monday night, he commented about the growing memorial outside the Silver Lake market.

“The amount of people who have left flowers and notes and have lit candles is astonishing,” he wrote. “Saw so many of her coworkers and people who came to celebrate my sister’s life.”