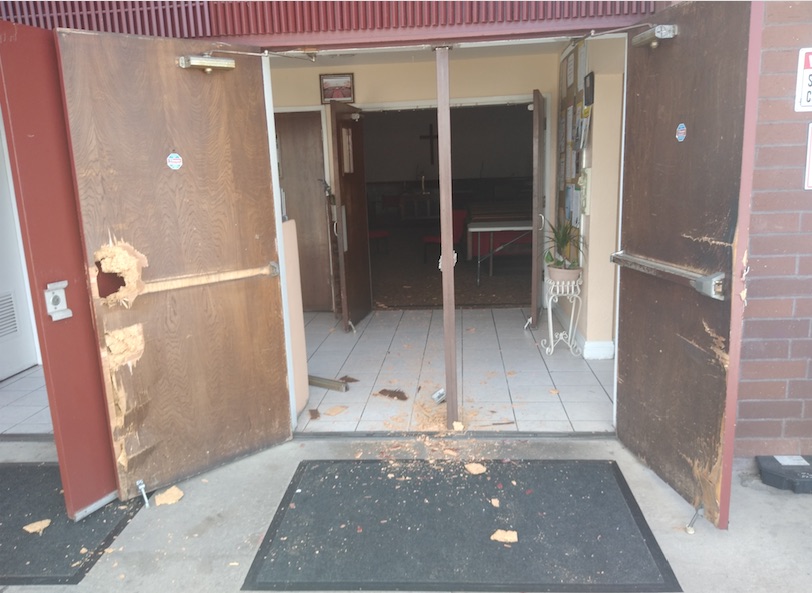 A 34-year-old Santa Ana man seen on surveillance video allegedly slamming his way into Johnson Chapel AME Church with a metal pipe was behind bars July 3, on suspicion of vandalizing the church and residence.

Joel Fabian Sandoval was booked on vandalism and vandalism of a place of worship, police said. He was being held without bail, according to jail records.

According to Santa Ana Police Corporal Anthony Bertagna, the suspect used a large metal pipe to slam his way into the edifice, located at 1306 W. Second St., in Santa Ana, just before 8:40 a.m., on July 2. The man clubbed the front doors with the pipe and, once inside, used the pipe to repeatedly strike a set of secondary doors.

Before he broke into the church, the man attempted to get into a utility shed at the rear of the church and also damaged another door on the side of the church, Bertagna said. It’s unclear what motivated the suspect, he said 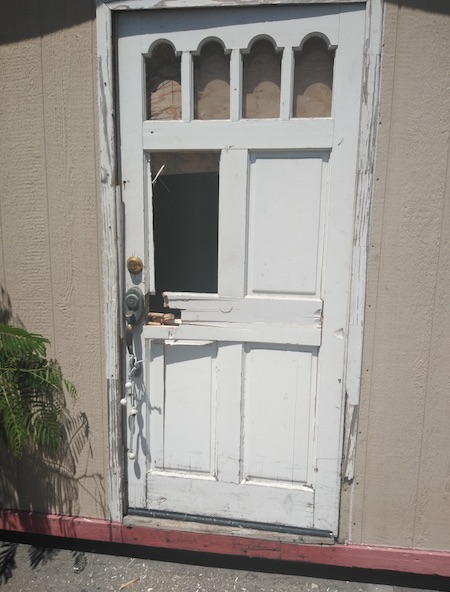 One of Johnson Chapel’s side doors was also damaged. Santa Ana police has arrested a suspect. (Johnson Chapel AME photo)

“He didn’t do any damage inside the chapel or didn’t take anything,” said Bertagna, who added that there have been no threats made against the church lately, and church officials told police they haven’t had any disagreements of note with anyone recently.

While the church’s interior remained intact, Pastor Delmon Howard remained troubled about the incident. “I’m still concerned about the welfare of our congregation and about this individual (in the surveillance video), ” said Howard in telephone interview.

“The way this man was acting and the raging energy that he had to tear down our doors, we don’t know what his true motive was. It could have been possibly been a hate crime, but we really don’t know at this time.”

During questioning by detectives, Sandoval indicated it was not a hate crime, police said.  Sandoval is accused of also vandalizing a garage door in the 1500 block of West McFadden Avenue, police said.

Even though this is the first time such an attack occurred, Howard said the church’s security team would immediately implement more stringent measures to ensure the safety of parishioners and the property.

“Every congregation needs to be prepared for any kind of incident that may happen. They need to take the situations that are occurring across our country, especially regarding churches, seriously,” Howard said.