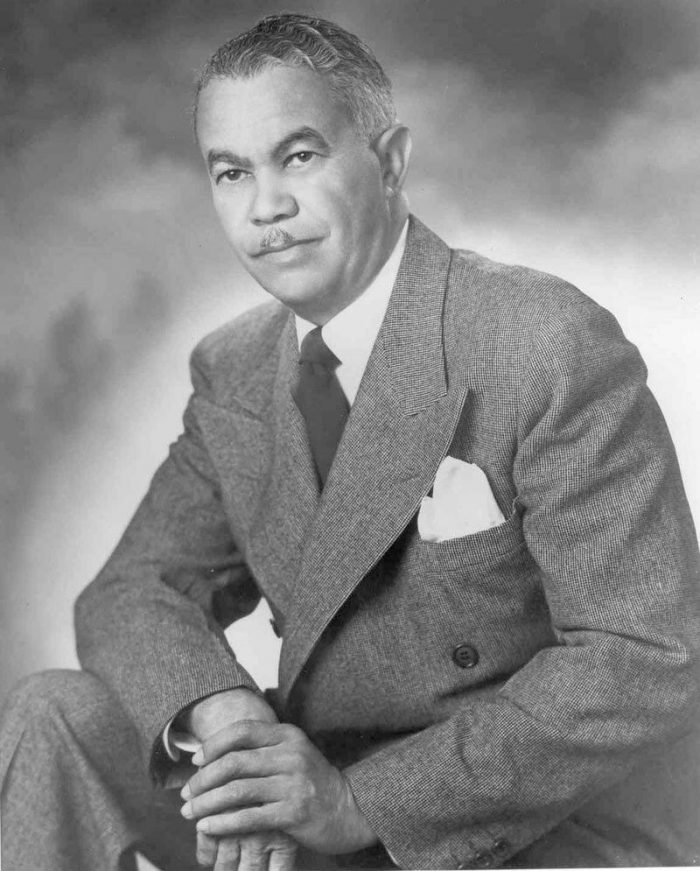 In 1894, the infant Paul R. Williams was born into a happy family who traveled to Los Angeles from Memphis, TN, most likely in search of better opportunities. But he was only two years old when tragedy struck. His father died in 1896, his mother followed suit in 1898.

The orphan Williams was placed in a foster home where his artistic gift was noticed early on. At the Los Angeles branch of the New York Beaux-Arts Institute of Design, Williams honed his craft. That craft would help him realize the better life his parents dreamed of but what’s more, it would thrust him into the spotlight as one of the most prolific African American artists and architects in Los Angeles’ history.

Now, part of that history is being brought to life in one of Williams’ projects, the La Kretz Botany Building and Psychology Tower—at UCLA. The two are currently being renovated by Los Angeles-based CO Architects.  The redesign will feature an originally planned, but abandoned piece of original art, a mural created by Williams in 1959.

“With this renovation, our role is to unlock the inherent opportunities of the existing building’s design, location, and history, to make a modern research and teaching facility that will serve the campus far into the future,” said Phillip White, AIA, Associate Principal at CO Architects.  “By leveraging its location on the edge of the botanical garden, the renovation introduces strategic transparency that pulls views through the building and out to the landscape.”

According to organizers, the renovation will include “innovative learning spaces and state-of-the-art laboratories that support teaching and research of plants, ecology, and conservation. The second project is a major renovation of the Psychology Tower, currently under construction and anticipated for completion in 2020.  The design includes significant upgrades throughout the building to improve the quality of classrooms, research environments, and study spaces…”

The project symbolizes Williams’ profound talent for beauty and function. In his heyday, his works were considered new and innovative, not like anything anyone else was designing at the time. That fact becomes more phenomenal when one considers the seemingly insurmountable racism he encountered on a regular basis. Despite it, he designed spaces for notables like Lucille Ball, Frank Sinatra and Cary Grant.

Also, the Polo Lounge at the Beverly Hills Hotel and the St. Jude’s Children’s Hospital in Memphis are included in his famous portfolio. His granddaughter Karen Hudson, in her book, Paul R. Williams: Classic Hollywood Style, told of how Williams wasn’t even allowed to live in some of the areas he designed.

That generation, the part of it that attends UCLA, will benefit from Williams’ original design, renovated to: “increase visibility for the work produced by the Ecology and Evolutionary Biology Department, as well as affiliated faculty from the Institute of the Environment and Sustainability.  To create a productive work environment, an office suite will incorporate a blend of private, shared, and open spaces.  The use of glass will increase transparency into the previously hidden research labs, while open floor plans will inspire researcher collaboration and efficiencies.  Conference rooms, huddle spaces, and alcoves will offer meeting areas for various types of interactions.  When complete, the building will contain laboratory space capable of housing up to 15 principal investigators and their graduate and postdoctoral researchers,” according to organizers.

Williams once wrote in an essay called “I Am a Negro, “Virtually everything pertaining to my professional  life during those early years was influenced by my need to offset race prejudice, by my effort to force white people to consider me as an individual rather than a member of a race. I encountered irreconcilables who simply refused to give me a hearing, but on the whole, I have been treated with amazing fairness.”

For the UCLA project, some of the organizers could have been who Williams was speaking of; they are those who are exercising patience and diligence in preserving the integrity of Williams’ work.

Said Scott Kelsey, FAIA, Managing Principal at CO Architects, “when addressing the complexities of institutional architecture, particularly those of a historic caliber, it’s imperative to respect the integrity of the site, as well as create environments conducive to learning, teaching, and research.”