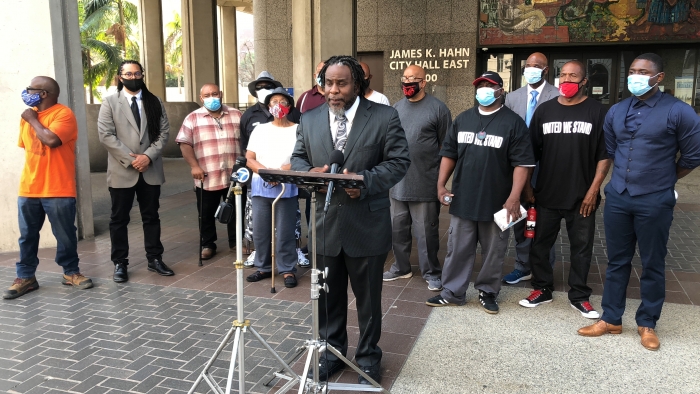 Pastor Shep Crawford Bring Bloods and Crips Together for a press conference.

Experience Christian Ministries (ECM) Pastor Shep Crawford brought together Bloods and Crips and other gang leaders to bring awareness about the peace movement that’s been going on in neighborhoods on the East Side of Los Angeles. Leaders of the gangs are frontline in the “hood” looking to dissolve tension. According to pastor Crawford, when the crime rate goes down in East Los Angeles, the police, pastors, or politicians will get credit. Crawford stated that he got a front-row seat to the majority of the reason that crime and shooting are down is because of the gang leaders that are striving to bring peace within the communities.

“They have been in the trenches, literally not trying to do it for any other reason but because they are now fathers, grandfathers, and husbands. They have been locked up thinking about the good they aim to do when they get out,” said Crawford. It’s only a small percentage of gang members that has not joined the peace movement. In the press conference, Crawford stated it’s time for the mayor, the governor, and everyone to know that it is time for the leaders to come out of the shadows. Make sure people understand the peace that is going on in neighborhoods is happening because of what they call O.G.’s, also known as “G Homies.” 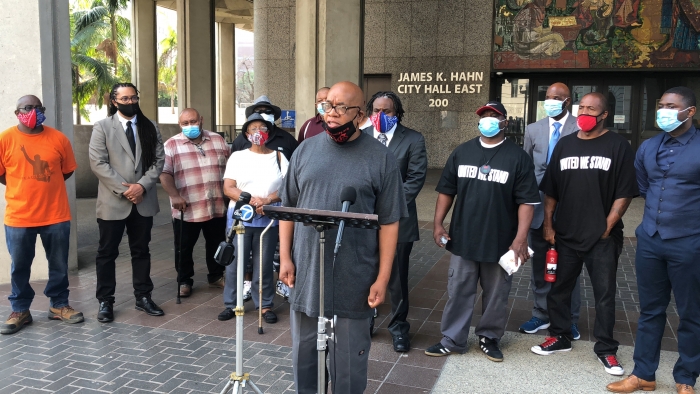 “As a pastor, I can’t go in the neighborhoods and tell people not to fight and not shoot, politicians can’t do it, and the police definitely can’t do it. There’s only one group of gentlemen, Kings that they listen to,” said Crawford.

Paul Williams, aka Lil Doc, was arrested by the Federal Government two days after ending a 45-year dispute between two tribes. Crawford said he does not know what to do because he is frustrated when they are trying to help cultivate and get the “O.G. ‘s” to start having peace movements it seems like the police arrest them. “Doc, who is a huge part of this movement which has in his way, has made sure these tribes come together and make sure they have peace, got picked up on some things that allegedly happened way back. I’m not here to talk about whether he is guilty or innocent. I’m here to talk about Paul Wallace that I know is passionate about what’s been going on in these streets, and so are a lot of these leaders here. Who are we to tell them that whenever they crossover to do the right thing, they will be picked up over things that happened years ago. It would make them say I don’t want to change.” 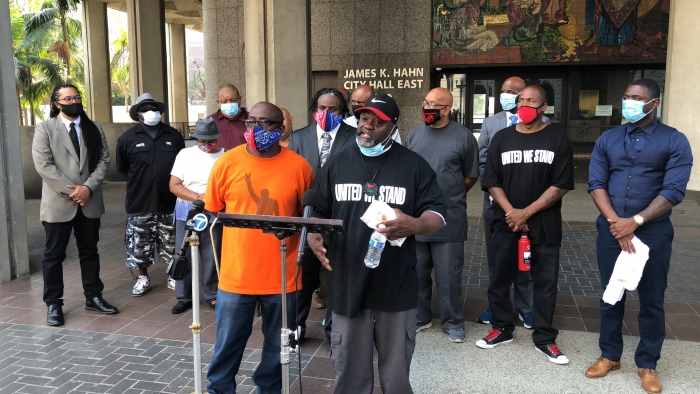 Brothers from the Bloods and Crips have career opportunities for men with criminal records.

Peace is not profitable to the system, infers Crawford and other gang leaders. Gang leaders and Pastor Crawford held the press conference because they are tired of being targeted and arrested when making a change in the community. They want to show unity within the Black and Brown gangs. Wallace “Lil Doc” had a large hand in making that happen.

Skipp Townsend spoke with the Los Angeles Sentinel and talked about Wallace. He said Wallace helped build relationships with four or five different communities that were at war with each other. The Feds charged him with a RICO Act for conspiracy and said that he is a gang leader when he is an influencer for peace, said Townsend.

According to Townsend, the Federal Government believes he is a threat to the system because of his influence. He was able to influence the East Coast Crips to sit down with the F13’s said Townsend. “That’s a major war that’s been going on for over 20 years. For Doc to reach everybody and get them to sit at the table and listen to something, it’s like going against the grain. I think the FEDS was thinking he got too much power. He has the power to bring peace. It’s political for them.” This is what social justice is about, said Townsend. “There is no justice here; the scale is unbalanced; they keep taking us to jail. How do we quantify how many lives are being saved because Doc brought those communities together. We can count how many dead bodies we got, that’s what police use. The murder rate is down, and they can’t take credit for that. Let me take credit for that. Let Doc take credit. They are afraid.” 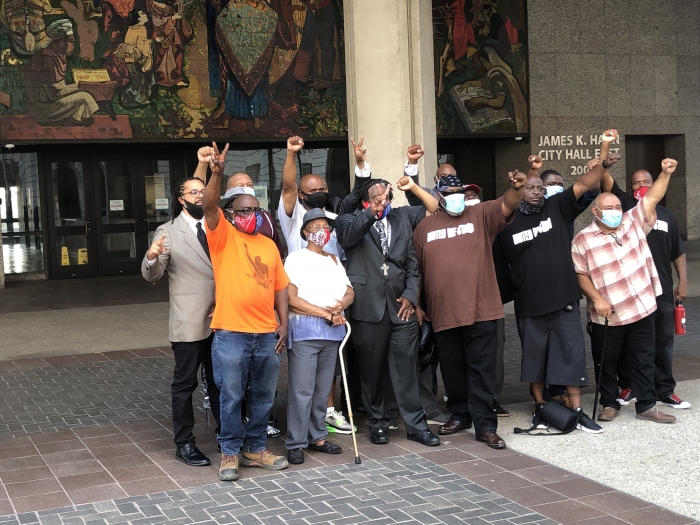 Leaders from the community united to support Paul Wallace.

According to Minister Terence Berry, there are different initiatives in the community that are trying to create peace; they are the unsung heroes. He states that to make peace, you have to have an intimate relationship with the people in power and people who can relate to the young people who are out here with guns creating senseless violence. “These are generational things so, in order to deal with a generation that has passed on these traditions that have pretty much been created on senseless violence and trauma, we have to have intimate relationships with individuals who can go into the trenches and speak and have power, and be listened to because it’s one thing to be able to say something, it’s another thing to be understood and listened to by those who are actually active out there,” said Minister Berry. It’s time for clergy to come up out of their churches and build with the people who are in the community, stated Berry. “God is doing something; it is a Kingdom movement that’s happening. We want to be able to have these brothers be free, be active, and make moves that need to be made to help our communities be built. Free Lil Doc (Paul Wallace),” said Minister Berry.

Pastor Crawford mentioned that the system has always been against Black and Brown people. “Since the birth of America always been against U.S. America cannot call these guys thugs when America started this whole country thugging. We want to make sure we got our just due.