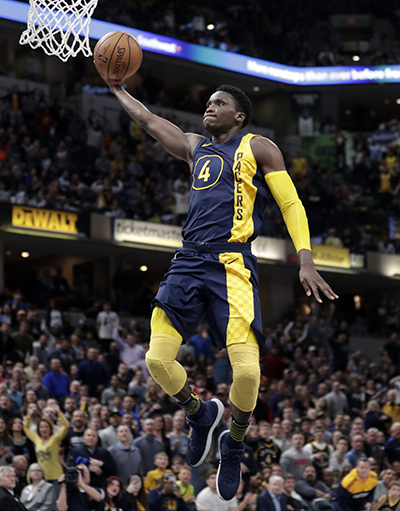 Indiana Pacers guard Victor Oladipo gets a fast-break dunk against the Golden State Warriors during the second half of an NBA basketball game in Indianapolis, Thursday, April 5, 2018. The Pacers defeated the Warriors 126-106. (AP Photo/Michael Conroy)

The Indiana Pacers are searching for a new naming-rights sponsor for the team’s downtown Indianapolis home.

The parent company of Bankers Life, CNO Financial Group Inc., announced on March 13 that it doesn’t intend to extend the naming-rights agreement for Bankers Life Fieldhouse after it expires in June 2019. The company currently pays $2 million annually for those rights, The Indianapolis Business Journal reported.

The 18,000-seat arena is owned by Indianapolis’ Capital Improvement Board, but the Pacers operate it through Pacers Sports & Entertainment and hold the rights to sell the naming sponsorship. The arena is also home to the Indiana Fever and hosts more than 600 events annually.

“We have been preparing for this for several months and have had significant interest by a number of interested parties since the announcement,” said Rick Fuson, president and chief operating officer of Pacers Sports & Entertainment.

Jim Andrews is senior vice president of Chicago-based IEG, which tracks and provides information for the sponsorship industry. He said the Pacers could realistically receive around $4 million annually for the naming rights.

The NBA naming rights market is strong and currently shows no signs of slowing down, said Galen Clavio, an Indiana University professor of sports media.

“The value for a sponsor, in having their name on a building right now, is high,” he said. “It doesn’t even have to be an Indianapolis-area company; it could be a national company.”

The fieldhouse is set to host the NBA All-Star Game in 2021, making it an even more desirable facility. It will be the first time Indianapolis has hosted the game in 36 years.