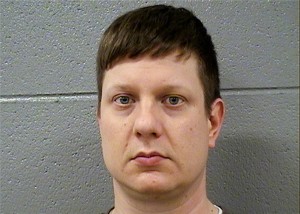 The charges announced November 24 claimed Officer Jason Van Dyke fired on Laquan McDonald within six seconds of exiting his squad car, as McDonald was walking away from the officer with a knife in his hand, in the 4000 block of South Pulaski Road in October 2014.

Of the eight 8th District officers who were on the scene with Van Dyke, none of them fired their weapons at the teen, who Alvarez claims was shot several more times even after he was on the ground writhing in pain. None of the other officers on the scene came to his aid after he was shot.

“I felt compelled in the interest of public safety to announce these state charges today,” Alvarez said. “Upon exiting his squad car, Officer Van Dyke is seen taking one step towards McDonald with his weapon drawn. The officer then opens fire on Laquan, whose arm jerks, his body spins around and he falls to the ground.”

6- This undated photo provided by his family shows Laquan McDonald. McDonald, whose name demonstrators are shouting as they march the streets and plan to shut down the city’s glitziest shopping corridor on Friday, Nov. 27, 2015, lived a troubled life full of disadvantages and at least one previous brush with the law. (Courtesy of the Family via AP)

A video of the incident taken from a squad car on the scene was set to be released at Crusader press time. During a press conference held after Van Dyke’s bond hearing where he was denied bail, Alvarez faced tough questions from the media. She said she is working with federal prosecutors on the case, and was hoping to do a joint press conference with them to announce the charges. However, when a Cook County judge ordered the city to release the tape last week, she felt the need to come forward and announce the charges.

However, that explanation did not sit well with the Black community or members of the media, who asked her if the tape is so egregious and shows the actions of Van Dyke so clearly were illegal, why would she allow a person she believes is a murderer to stay on the streets?

“It’s extremely complicated when you investigate police shootings,” said Alvarez, as she began a lengthy explanation on the matter. “This investigation was meticulous, tenacious and we did everything to make sure we were not going to jeopardize our case. We want to make sure we are following all the rules so that is why this investigation took a significant amount of time. To the casual observer, it seems as if we are taking too long. It’s not unusual for these cases to take up to 20 months before charges are filed.” 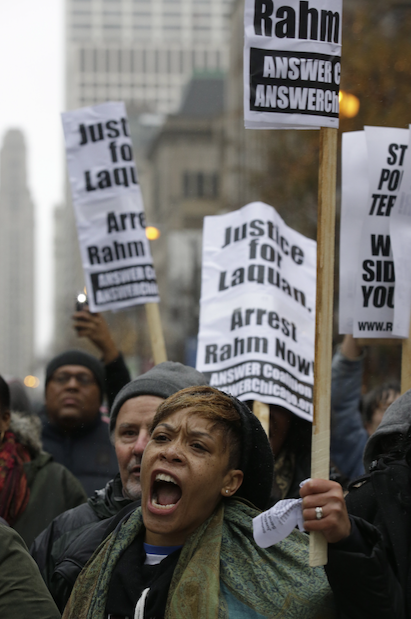 4- In this Tuesday, Nov. 24, 2015, file photo, a protester holds a sign as people rally for 17-year-old Laquan McDonald, who was shot 16 times by Chicago Police Department Officer Jason Van Dyke in Chicago. McDonald, whose name demonstrators are shouting as they march the streets and plan to shut down the city’s glitziest shopping corridor on Friday, lived a troubled life full of disadvantages and at least one previous brush with the law. (AP Photo/Paul Beaty, File)

Coming on the heels of her failed prosecution of Detective Dante Servin, who fired from his car into a crowd of unarmed, young Black people three years ago killing Rekia Boyd, she was asked why the Black community should trust that her office will do the right thing this time.

“There is distrust in many communities of law enforcement, and I think that is why it is important that we do things to help build the confidence in our police departments,” Alvarez said. She went on to say, “And cases like this where officers clearly go overboard…we are making the statement today by charging this on-duty officer with first-degree murder. I think it is a good sign that we are looking at this, and we are concerned about this.”

The attorney for Officer Van Dyke was frustrated after the hearing. He is not happy the video of the incident will be released. He believes it will affect his client’s ability to get a fair trial.

“The people who judge this tape from the comfort of their living room are not seeing it from the same perspective of my client,” said Van Dyke’s attorney Dan Herbert. “People viewing this tape will have the benefit of hindsight. People will judge the split-second actions of my client. However, the standard in this case is what was my client experiencing at the time he made this split-second decision to fire.”

Herbert said this is not a murder case, and he believes he will be able to successfully defend his client. He hinted that he believed the arrest of his client was political and not criminal.

However, Wallace “Gator” Bradley of United in Peace Inc., who was in the courtroom during the bail hearing, said he believes it was indeed a murder. Wallace said once McDonald was down after being shot, he was no longer a threat, and that according to the prosecutors, McDonald never was a threat, therefore, it was a murder.

“For an individual to empty 16 rounds into a person and the majority of them while the individual was on the ground, that’s malicious and criminal intent. That man was charged righteously for murder,” Bradley said.

Others in the community agree with Bradley. A number of activists and ministers met with Emanuel earlier in the week and asked why the video release was delayed. The city claimed it feared large-scale civil unrest would ensue after what happened with the Michael Brown incident in Ferguson, Missouri. 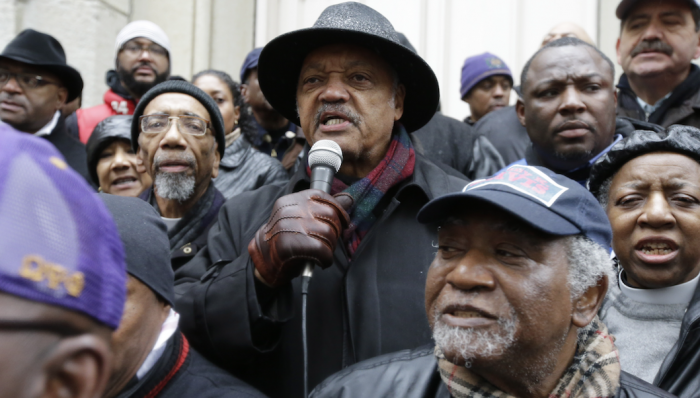 2- The Rev. Jesse Jackson speaks to demonstrators on Friday, Nov. 27, 2015, in Chicago, as community activists and labor leaders hold a demonstration billed as a “march for justice” in the wake of the release of video showing an officer fatally shooting Laquan McDonald. (AP Photo/Nam Y. Huh)

“Everything is being taken from us and nothing is being given to us. Everyone is trying to tell us how to react,” said Timothy Bradford, who is a member of the Black Youth Project 100. “There is always this focus on how Black people respond to being abused, exploited and oppressed politically, economically and socially. But there is very little focus and investment in addressing the root causes of the conditions that lead to the reactions.”

The autopsy report from the Cook County Medical Examiner’s Office found McDonald was shot once on each side of his chest. He also had single bullet wounds in his scalp and neck; two in his back; seven in his arms; one in his right hand; and two in his right leg. Additionally, the report stated nine of the 16 entrance wounds had a downward trajectory path indicating Van Dyke fired into the teen while he was on the ground.

Van Dyke has had 18 complaints filed against him in his career, including a settlement that was paid out to Chicagoan Ed Nance, who was roughed up by the officer during a traffic stop a few years ago. 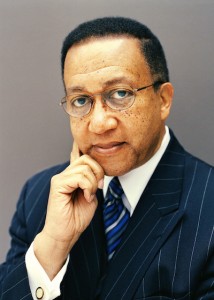 Strategic Power of the Black Press in 2016 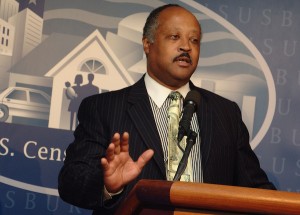 Beyond the Rhetoric: Is Barack Obama The Most Reluctant President in Histor... 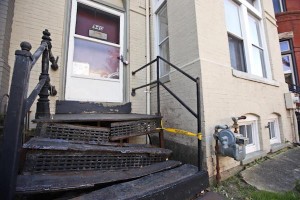 In DC, public housing tenants forced out, then homes flipped