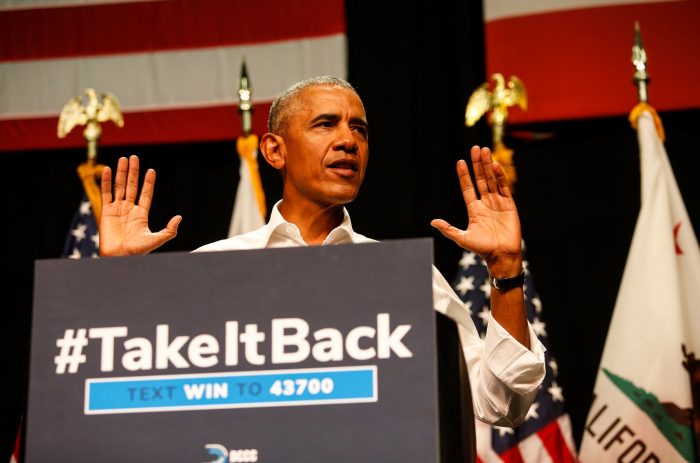 Former President Barack Obama says the November midterm elections will give Americans “a chance to restore some sanity in our politics,” taking another swipe at his successor as he raises his profile campaigning for fellow Democrats to regain control of the House.

Obama didn’t mention President Donald Trump by name during a 20-minute speech Saturday in the key Southern California battleground of Orange County but the allusions were clear.

His appearance one day after a strongly worded critique of Trump at University of Illinois at Urbana-Champaign touched on themes of retirement security, climate change and education.

“If we don’t step up, things can get worse,” the former president told the audience at the Anaheim Convention Center. “In two months, we have the chance to restore some sanity to our politics. We have the chance to flip the House of Representatives and make sure there are real checks and balances in Washington.”

Obama gave shout-outs to seven Democratic candidates in competitive House districts across California that are considered crucial to the party’s efforts to oust Republicans from control. Four of those districts are at least partly in Orange County, a formerly reliable GOP bastion that went for Hillary Clinton in the 2016 presidential election.

Clinton trounced Trump by more than 4 million votes in California in 2016 and carried Orange County by 9 percentage points. A surge in immigrants has transformed California and its voting patterns. The number of Hispanics, Blacks and Asians combined has outnumbered whites in the state since 1998. Meanwhile, new voters, largely Latinos and Asians, lean Democratic.

In Orange County, Republicans held a 13-point edge in voter registration 10 years ago but that has shrunk to 3 points while independents, who tend to vote like Democrats in California, have climbed to 25 percent.

Democrats, hoping to build on their 39-14 advantage in the state’s congressional delegation, are eyeing Republican seats in districts that Clinton won in 2016. Each of the seven candidates that Obama campaigned for on Saturday fit that description. 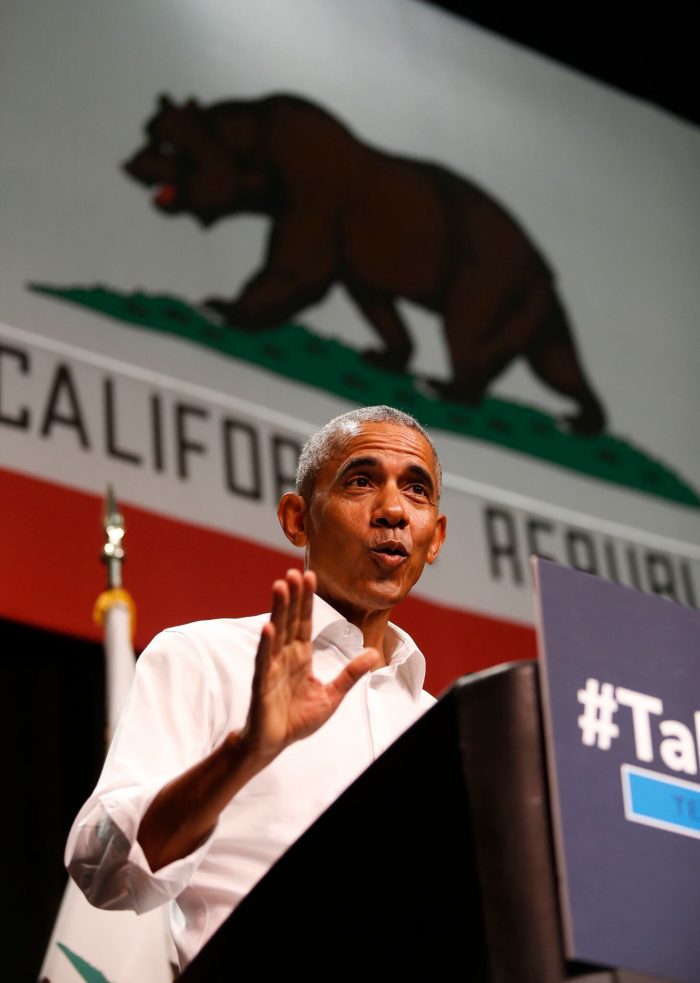 Republican Rep. Dana Rohrabacher, whose district encompasses part of Orange County, is fending off a challenge from Democratic real estate investor Harley Rouda to secure a 16th term in Congress despite barely winning 30 percent of the primary vote. In the other Orange County race, Gil Cisneros, a Democratic philanthropist and Navy veteran, is vying for an open seat created by retiring Republican Ed Royce.

He also made a plug for nonprofit executive Katie Hill in her Los Angeles-area race to unseat sophomore Republican Steve Knight, who won an underwhelming 53 percent of the vote in 2016.

California Republicans said Obama’s appearance would have little impact and may even help their party.

“I wish he would come more often because he reminds Republicans of eight years of misery,” said Republican National Committeeman Shawn Steel, who lives in Orange County. “It reminds the Republicans why these midterms are important.”

Says Pence: “The truth is, the American people in 2016 rejected the policy and direction of Barack Obama when they elected President Donald Trump.” Pence comments came in a taped interview set to air on “Fox News Sunday.” Fox released an excerpt on Saturday.

Obama is expected to deliver a similar message in Cleveland on Thursday, when he campaigns on behalf of Richard Cordray, the Democratic nominee for Ohio governor, and other Democrats.