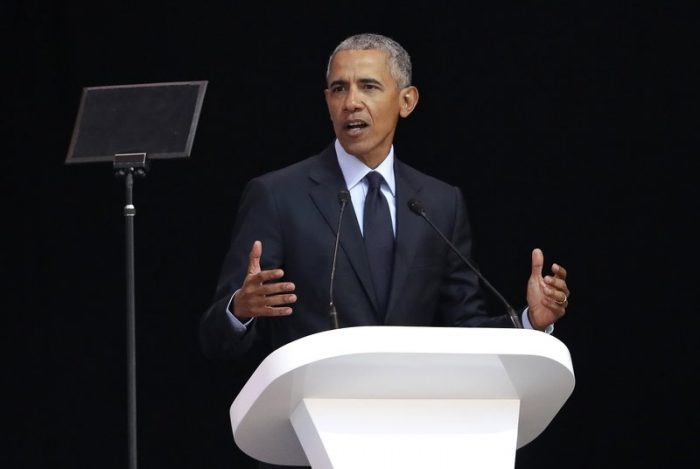 Former President Barack Obama took the stage Tuesday in Johannesburg, South Africa to celebrate the 100th birth anniversary of the late South African President, Nelson Mandela to the loud chants of those in attendance.

Obama opened his lecture with a humorous list of “corrections and a few confessions” he had for the audience, including the fact that he indeed knew how to dance (but not as well as his wife, Michelle Obama).

The 16th Nelson Mandela Annual Lecture is the first major speech Obama has given since leaving office in 2017, and he used his time on stage to speak on the legacy of Mandela, his impact in South Africa and how the world has changed and can improve throughout Mandela’s legacy.

“Given the strange and uncertain times that we are in – and they are strange and they are uncertain – with each day’s news cycles bringing more head spinning and disturbing headlines I thought maybe it would be useful to step back for a moment and try to get some perspective,” Obama said.

The former president criticized the censorship and the promotion of hate speech promoted in today’s political landscape under the Trump administration.

“And a politics of fear and resentment and retrenchment began to appear, and that kind of politics is now on the move,” Obama said. “It’s on the move at a pace that would have seemed unimaginable just a few years ago.”

Reminiscent of Obama’s 2008 “Hope” campaign, he posed the question should the world hold on to this idea of hope that may have been felt during triumphant times like the release of Mandela’s imprisonment or the fall of the Berlin Wall.

“I believe in Nelson Mandela’s vision,” Obama said. “I believe in a vision of equality and justice and freedom and multi-racial democracy, built on the premise that all people are created equal, and they’re endowed by our creator with certain inalienable rights.”

Mandela died in 2013 with a similar mindset. He was freed from imprisonment in 1990 after serving almost three decades as a result of protesting the apartheid.

Obama’s speech stressed the importance of continuing on in order to tell a “better story.”

“And I believe we have no choice but to move forward; that those of us who believe in democracy and civil rights and a common humanity have a better story to tell,” Obama said.

He left the crowd of around 15,000 people with a list of “guideposts that draw from Madiba’s work, his words, the lessons of his life.” His first recommendation was to actively rally for change.

“First, Madiba shows those of us who believe in freedom and democracy we are going to have to fight harder to reduce inequality and promote lasting economic opportunity for all people,“ Obama said.

For Obama, protesting isn’t enough to invoke a social change.

Going away from script, Obama noted that those with wealth should do their part in helping those who may not be as well off.

“That’s ambition. That’s impact. That’s influence. What an amazing gift to be able to help people, not just yourself,” he said.

Obama stated that people have to seek the commonality among one another despite some differences.

“Second, Madiba teaches us that some principles really are universal – and the most important one is the principle that we are bound together by a common humanity and that each individual has inherent dignity and worth,” he said.

Obama’s final message to everyone watching was that there is one thing that can be seen as a beacon of light in otherwise bleak times.

“Love comes more naturally to the human heart, let’s remember that truth,” Obama said. “Let’s see it as our North Star, let’s be joyful in our struggle to make that truth manifest here on earth so that in 100 years from now, future generations will look back and say, ‘they kept the march going, that’s why we live under new banners of freedom.’