Governor Jerry Brown today signed a new law by Assemblymembers Kevin McCarty (D – Sacramento) and Lorena Gonzalez Fletcher (D – San Diego) and sponsored by California Secretary of State Alex Padilla, to automatically pre-register all voting eligible sixteen and seventeen year olds to vote when they receive a California Driver’s License or California State I.D.  The measure, AB 1407, will automatically pre-register approximately 200,000 sixteen and seventeen year olds to vote annually and will be largest expansion of youth voter access in American history.
In 2015, Assemblymembers Lorena Gonzalez Fletcher, Kevin McCarty and Luis Alejo successfully established the New Motor Voter Program allowing every eligible person who requested a driver’s license or state identification card to be automatically registered to vote.  AB 1407 updates the 2015 New Motor Program to include automatic voter pre-registration and allowing young people to opt out of preregistration if they wish.
“AB 1407 will increase voter engagement by removing the unnecessary step of pro-actively registering to vote, increasing the likelihood of a young person voting in future elections,” said Assemblymember McCarty.  “We need more young people engaged in the political process and impacting issues like college access and affordability, climate change, healthcare and housing. Voting is the first step to make a citizen an active part of the political process. This measure will make sure that all voices in California are heard.”
An estimated 6.6 million Californians are eligible to vote but unregistered, ranking the state 38th among the 50 states in voter registration. According to the California Secretary of State, youth aged 18-24 years old stand out as registering at a far lower rate than any other age group.   However, statistics show that less than one out of every five residents who interact with the DMV through the current motor voter program opt-in to vote
“In California, we’re making it easier for young people to become active participants in our elections,” said Secretary of State Padilla. “Pre-registration is one of our most powerful tools for building civic engagement.  AB 1407 will ensure that young people who apply for or renew a state driver license or ID at the DMV as part of California Motor Voter, also have the opportunity to pre-register to vote. It will ensure young people have access to the ballot as soon as they turn 18.”
“We should make it as easy as possible for all citizens to register to vote, whether they’re teenagers, senior citizens or somewhere in-between,” said Assemblymember Gonzalez Fletcher. “I want to thank Gov. Brown for signing this bill, which will help California’s youngest voters make sure they’re registered to vote as soon as they become eligible to cast a ballot.”
AB 1407 will take effect on January 1, 2019.
ADVERTISEMENT
ADVERTISEMENT
Categories: Political
Tags: #lasentinel | AB 1407 | California | DMV | Gonzalez Fletcher | Jerry Brown | Kevin McCarty | Sentinel News Service | youth vote 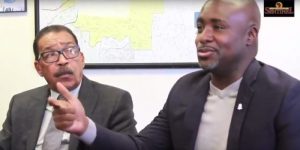