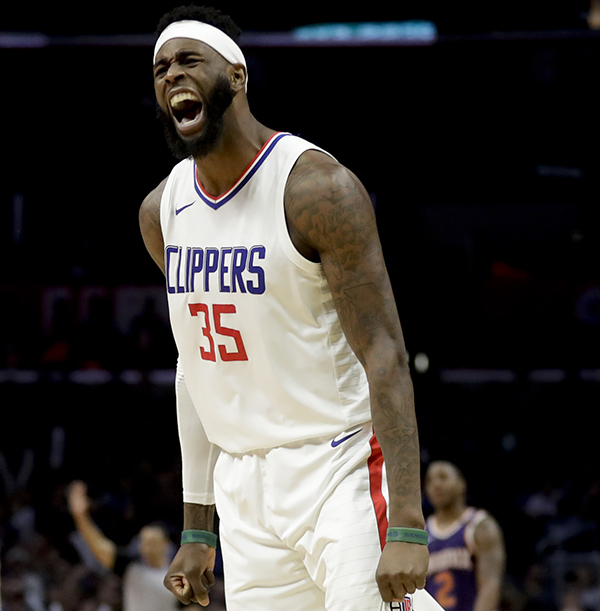 Los Angeles Clippers center Willie Reed celebrates after making a basket against the Phoenix Suns during the second half of an NBA basketball game in Los Angeles, Wednesday, Dec. 20, 2017. The Clippers won 108-95. (AP Photo/Chris Carlson)

Willie Reed was the No. 1 pick Saturday in the G League draft, his rights going to the Salt Lake City Stars.

The 28-year-old Reed has spent parts of three seasons in the NBA, appearing in 152 games with the Brooklyn Nets, Miami Heat, Los Angeles Clippers and Detroit Pistons.

His career NBA high is 22 points, done twice with the Heat in a span of four days in January 2017. And now he returns to the G League as part of Utah’s affiliate club, looking to prove himself again.

“I’m ready to get around the guys and get to work,” Reed said. “I want to be able to lead by example and work on becoming a leader, trying to lead these guys and impart some of my wisdom that I’ve learned so far in coming from the G League to the NBA and now being back in the G League.”

Reed is a two-time G League all-defensive team player, and was a G League All-Star in 2015.

Greensboro the Charlotte Hornets’ affiliate had the Nos. 2 and  picks, taking Louisville’s Chinanu Onuaku and Fairfield’s Tyler Nelson. Serbian player Alen Smailagic was the No. 4 pick by the South Bay Lakers, and Murray State’s Terrell Miller went at No. 5 to the Atlanta-affiliated Erie BayHawks.

Smailagic was traded to the Santa Cruz Warriors later in the draft. He was one of four international players taken in the first round, the others being France’s Darel Poirer (who was later traded to the Washington-affiliated Capital City Go-Go), Belgium’s Manu Lecomte to the Agua Caliente Clippers and Canada’s Jabari Craig to the Long Island Nets.

Juwan Howard Jr., the son of Miami assistant coach Juwan Howard, went in the second round to the Sioux Falls Skyforce the Heat affiliate.

There were 198 players with G League experience on NBA rosters to start the season, including at least three on all 30 clubs. The G League’s 18th regular season  with a record 27 franchises starts Nov. 2.