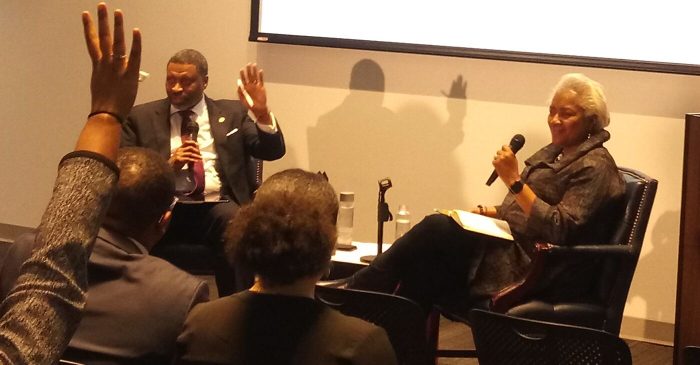 NAACP President and CEO, Derrick Johnson joins political strategist Donna Brazile, for “Where Do We Go from Here,” a discussion on the state and future of race in America held at the Howard University Interdisciplinary Building. (Photo: Courtesy Photo)

Following the aftermath of President Donald Trump’s State of the Union address, NAACP President Derrick Johnson and Political Strategist Donna Brazile took part in a special “State of Black America” forum in search of the answer to, “Where do we go from here?”

Held at the Howard University Interdisciplinary Building, Johnson utilized the event as an opportunity to give his rebuttal to what some deemed a “contentious presidential address” and issued a call to action.

“It’s unfortunate that [Trump’s State of the Union speech] was a distraction from Stacey Abrahams’ ‘State of the Union,’ that served as a reality for African Americans who weren’t accepting the fact that the current president has been one of the best galvanizing forces to turn out the Black vote,” Johnson said

Recalling the 2008 presidential elections and the nostalgia that it left behind, Johnson went on to reference the wakeup call that all Americans were handed — post President Barak Obama — during the Trump era.

“If you remember in 2008, we celebrated what we thought was impossible,” Johnson continued. “Commentators then began to talk about a post-racial society, and here we are some 11 years later, recognizing that the occupant of the White House gives us a daily reminder of why we as a people must stick together and stay together.”

“What the president has done has opened up the eyes of so many people,” Johnson continued. “This nation has still not dealt with race and its appeal to the lowest common dominator of us as a community. We really need to take a step back and focus on what’s important, particularly in this era.”

Moderating the discussion, Donna Brazile gave reference to Trump’s statement that we as a nation “could choose greatness” but in doing so, would also need to choose his ideals and values.

Following this statement, Brazile posed the question to Johnson, “How would you, choose greatness for America in the 21stcentury?”

“Greatness in this county is when we ensure that we take care of our elderly people,” Johnson said. “That we prepare our young people so that they can have a brighter future. That we protect the rights of the disadvantaged, however we place the label. That is what makes a healthy society. That is what makes us great.”

“We need to strengthen free public education, so that in the global economy, our children won’t get left behind. We need to examine the issue of healthcare and how many individuals are using a substantial amount of their income on healthcare, and we need to be a nation that is of one nation and not allow for individuals to divide us.”

Closing out the session, focused on the NAACP, Donna Brazile proudly posed the timely question: “What role do women still play within the NAACP organization?”

“Women have a huge role,” Johnson said. “Women, just like the church, make up the backbone of the organization. We’ve had six Black female presidents before consolidating titles and roles, so perhaps it’s time now [that] we have a first female president and CEO.”

“This is a very interesting time in our nation’s history,” HU’s Johnson said. “And the event tonight, continuing Black History Month ‘Where Do We Go from Here,’ is a very appropriate topic.”

“I recently did an interview for CNN,” he continued, “and one of the things that I pointed out to them was that I don’t believe there is a monolithic ‘Black Vote.’ “If these people came on my campus and polled all of the students on a variety of topics, they would get a variety of opinions… That is an example of why discussions such as these are so important. We need a clear idea as to where we are and where we should be going.”