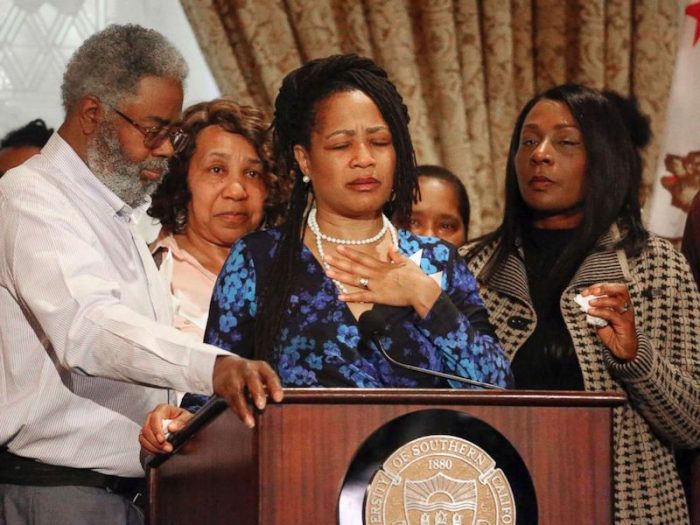 Oakland City Councilwoman Lynette McElhaney, the mother of Victor McElhaney, 21, a student killed Sunday, March 10, 2019, during an attempted robbery, talks about her son during a news conference on the USC campus in Los Angeles, March 12, 2019. (Reed Saxon/AP)

An Oakland City Council member today hailed the life of her slain son — a USC student who was gunned down near campus in an apparent robbery attempt — saying he was a musical prodigy who will be remembered as more than just a homicide statistic.

Speaking to reporters at USC, Lynette Gibson McElhaney said her 21- year-old son Victor, who was fatally shot just after midnight Sunday near Maple Avenue and Adams Boulevard, is “not a homicide number or statistic.”

Police said McElhaney, a student at USC’s Thornton School of Music, was approached by three or four men in their 20s who tried to rob him, leading to the shooting.

McElhaney — who transferred to USC in 2017 — was part of the USC jazz studies program with an interest in the relationship between music and social and political movements. He also mentored young musicians and taught at the Oakland Public Conservatory of Music.

“He played for weddings and funerals and christenings and bar mitzvahs,” Lynette McElhaney said. “Can you imagine African drums at a bar mitzvah? That’s what he did. And he believed that music could heal the world of violence and sickness and addiction. And his desire to bring music medicine, that’s what he called it, to the world brought him to Los Angeles, the city of angels.

“Victor came here because he wanted to be in the pantheon of all this great jazz tradition” at USC, she said.

McElhaney joked that her son didn’t care about actually getting a degree.

“There’s a part of him that really wanted to (be) a college dropout so he could keep his street cred,” she said. “But he didn’t mind being part of this Trojan family.

“… And we felt bonded and loved at this place. So I want to say thank you SC. … He walked here, he was tall here and you all loved him.”

Interim USC President Wanda Austin sent out a statement informing the USC community of McElhaney’s death. In it she expressed her condolences to his family and friends. 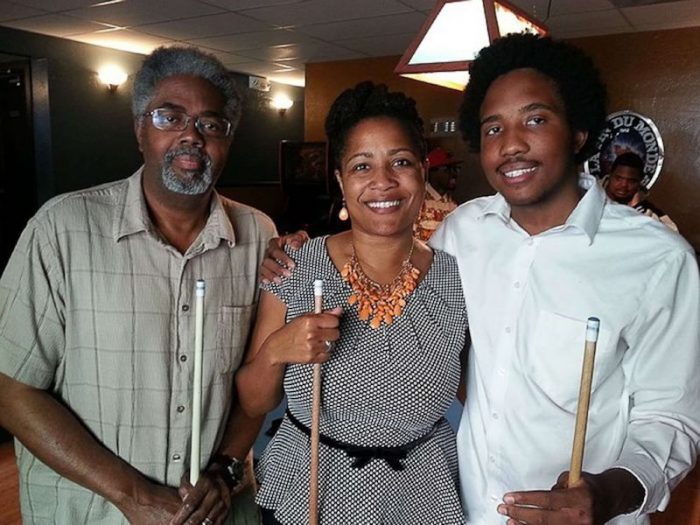 Victor McElhaney, right, is pictured with his father Clarence and mother, Councilmember Lynette McElhaney, in a photo released by his mother with a statement about his murder, March 10, 2019. (Lynette Gibson McElhaney)

“He believed in the power of music to touch lives to heal and to bring hope,” Austin said.

McElhaney’s killing is the latest of several high-profile killings of students in apparent robberies or attempted robberies near USC’s campus in the past seven years.

Alberto Ochoa, the last of four defendants charged in the July 24, 2014, beating death of Xinran Ji, a USC graduate student from China, was sentenced last Friday to life in prison without the possibility of parole. Two others, Alejandra Guerrero and Andrew Garcia, had already been sentenced to life in prison without parole, while the getaway driver, Jonathan Del Carmen,

was ordered to serve a 15-year-to-life state prison sentence.

Two other USC graduate students from China, Ying Wu and Ming Qu, were shot to death during an April 2012 robbery as they sat in a car that was double parked on a street near the USC campus. Javier Bolden and Bryan Barnes were sentenced to life in prison without the possibility of parole for their killings.