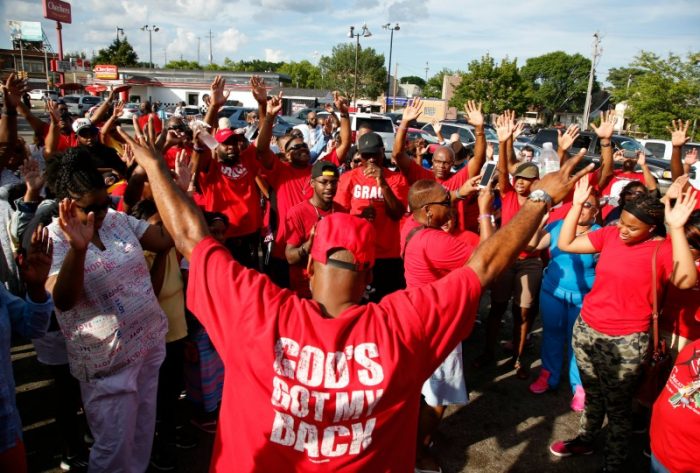 People pray for calm outside a business in Milwaukee, Sunday, Aug. 14, 2016. The business was burned during unrest after a police shooting. The black man whose killing by police on Saturday touched off rioting in Milwaukee was shot by a black officer after turning toward him with a gun in his hand, the police chief said Sunday, as Wisconsin’s governor put the National Guard on standby against any further violence on the city’s mostly black north side. (AP Photo/Jeffrey Phelps)

MILWAUKEE (AP) The man whose shooting by Milwaukee police triggered hours of violent protests on the city’s predominantly black north side was a 23-year-old black man and father to a toddler, his mother said Sunday.

Mildred Haynes told the Milwaukee Journal Sentinel (http://bit.ly/2aW6oE6 ) that her son, Sylville Smith, was killed by police Saturday. A Milwaukee police spokesman did not immediately respond to messages from an Associated Press reporter seeking confirmation of the man’s identity.

A distraught Haynes told the newspaper that police have told her little about her son’s death.

“My son is gone due to the police killing my son,” she said Sunday. “I am lost.”

Police say a man fled during a Saturday traffic stop and that he was carrying a weapon. It’s unclear whether he pointed the gun at officers before being shot several times.

Smith was accused in a shooting last year and charged with recklessly endangering safety, a felony. Smith was subsequently accused of pressuring the victim to recant statements that identified him as the gunman and was charged with trying to intimidate a witness, he newspaper reported.

It’s unclear why both charges were dropped.

He also pleaded guilty to carrying a concealed weapon in 2014. Smith was cited for driving without a license or insurance, speeding and driving with open intoxicants earlier this year. Court records identify Smith as black.

Smith’s death sparked explosive protests in northern Milwaukee, a town of 600,000 where roughly 40 percent of residents are black. At least four businesses were burned down in the protests that stretched into Sunday morning, leading Gov. Scott Walker to activate National Guard troops in case violence persists.