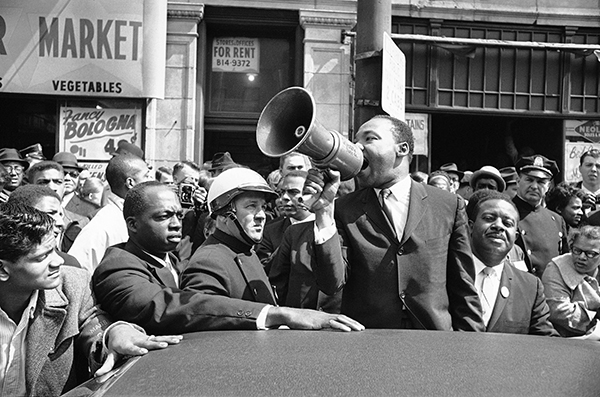 Dr. Martin Luther King Jr., as he addressed a crowd with a bull horn in the Roxbury section of Boston April 22, 1965. King in Boston to lead a civil rights march, made a tour of the Roxbury section to view some of the schools in a predominantly African American district. He urged spectators to take part in the march. He will address a joint session of the Massachusetts Legislature. (AP Photo)

The Rev. Martin Luther King Jr. fought for many issues throughout his life as a minister and the leader of the Southern Christian Leadership Conference, speaking out against various barriers holding back Blacks, Hispanics, Asian Americans and Native Americans. Fifty years after his assassination, some of these barriers have fallen _ but others remain.

Here is a look at five civil rights issues King addressed during his lifetime and where they stand now:

Four days after Rosa Parks was arrested for refusing to give up her seat on a Montgomery, Alabama, city bus, King exhorted a crowd at the Holt Street Baptist Church to launch a bus boycott. “Now let us go out to stick together and stay with this thing until the end,” he told the thousands gathered at the church that day in 1955.

A federal court ended racial segregation on Montgomery public buses, elevating King into the national spotlight. Years later, he stood behind President Lyndon Johnson at the signing of the Civil Rights Act of 1964, which banned segregation in public places and employment discrimination on the basis of race or national origin.

The Kerner Report came from a commission created by President Lyndon Johnson in 1967 to examine the causes of urban riots in the 1960s. It blamed them largely on poverty, joblessness and tension with police and minority communities.

King’s participation in the 54-mile (87-kilometer) march from Selma, Alabama, to the state capital of Montgomery elevated awareness about the troubles Blacks faced in registering to vote.

President Johnson addressed a special session of Congress after marchers were attacked by White mobs and police, successfully urging lawmakers to pass the Voting Rights Act.

Here, Mantler said King achieved a lasting effect. By the 1970s and 1980s, the American South had elected thousands of Blacks to various offices, compared to almost none in the 1950s.

Black and Latino coalitions sprouted in Chicago, Los Angeles, New York and Houston to elect people of color to local and federal offices – and eventually aided in electing the nation’s first Black president. 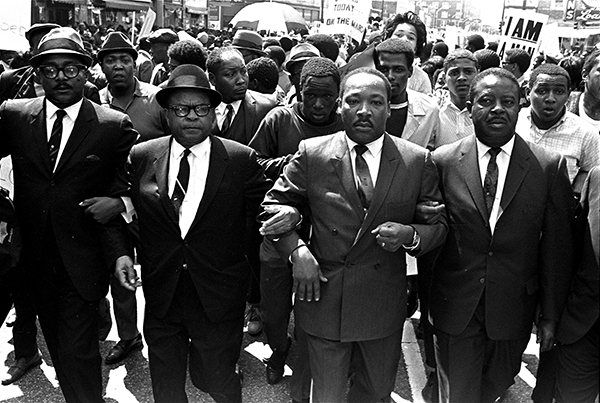 King was assassinated in Memphis while coming to the aid of striking sanitation workers. He also was in the midst of organizing the Poor People’s March on Washington, a campaign that sought to highlight the economic and human rights of poor citizens of all ethnic backgrounds struggling with poverty.

Former U.S. Sen. Fred Harris of Oklahoma, the last surviving member of the Kerner Commission, said the fight to reduce poverty remains one of King’s most significant unfinished works.

“There are far more people who are poor now than was true 50 years ago,” Harris said. “Inequality of income is worse.”

During King’s lifetime, landlords could refuse to rent to Blacks and Latinos, and racial covenants and redlining allowed people of color to be excluded from buying homes in certain neighborhoods.

Harris, the former senator, said Blacks were disproportionately affected by the subprime loan crisis of the late 2000s, which contributed to the further racial and economic segregation of neighborhoods, especially in urban areas. 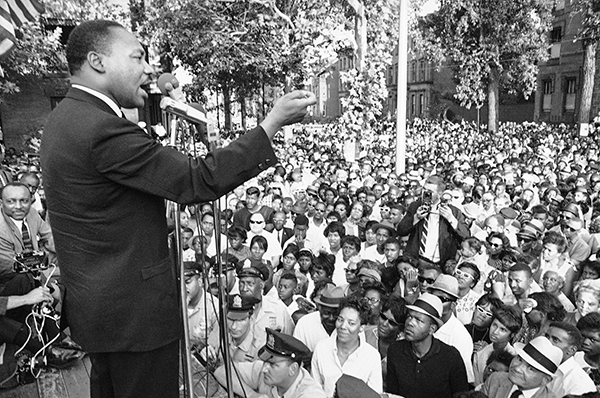 A line of police stands in front of platform from which Dr. Martin Luther King speaks during mass meeting in front of all-white Girard College in Philadelphia August 4, 1965. Dr. King said the wall surrounding the school was a symbol of evil and called for continued efforts to integrate the school. (AP Photo)

“I oppose the war in Vietnam because I love America,” King told an audience at New York’s Riverside Church in 1967. “I speak out against this war, not in anger, but with anxiety and sorrow in my heart, and, above all, with a passionate desire to see our beloved country stand as the moral example of the world.”

King had concluded that militarism, like poverty, was stalling the U.S. from living up to its ideals. And Mantler said King felt it ultimately could lead to fascism.

Today, the U.S. remains involved in the war of Afghanistan, and maintains military bases around the world.

Mantler said the nation did not heed King’s warning that war damages the nation’s moral authority. “Both parties fight to give more money to the Pentagon,” Mantler said. “It hasn’t changed.”

And that support for militarism often comes at the expense of fighting poverty, he said.