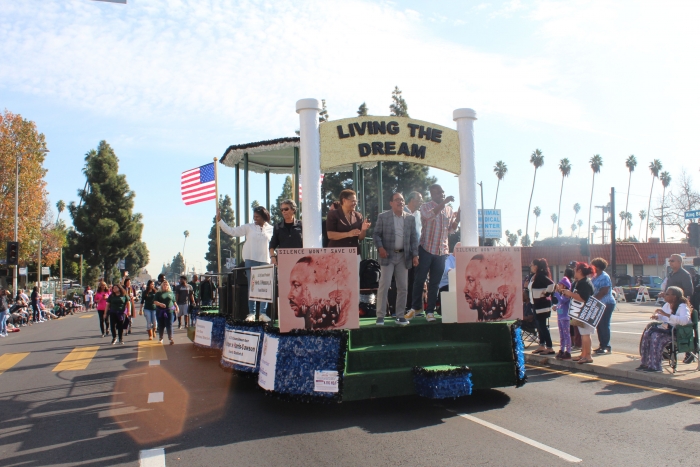 Every year on January 20, the South Los Angeles community gathers to honor the legacy of Dr. Martin Luther King Jr. Lowriders, marching bands, and drill teams help make up the largest MLK Day celebration in the country. The parade brings residents together from across California before culminating with the Freedom Festival at Leimert Park. For 35 years, the Kingdom Day Parade has brought residents together along Martin Luther King Jr. Boulevard, Crenshaw Boulevard and neighboring streets to celebrate social progress, acknowledge our past and look towards our future. For four years, Councilmembers Marqueece Harris-Dawson, Herb Wesson, and Curren Price, who each represent sections of South L.A., have hosted the MLK Freedom Festival to activate Leimert Park and engage residents to create community solutions. Despite this long-standing tradition, many residents do not know the history and significance of Leimert Park and how it relates to the legacy of Dr. King.

Leimert Park has been a hub of African American arts and culture for decades. On Sundays, an African drum circle still meets at the neighborhood square in Leimert Park Village and Afrocentric knick-knacks are still sold by neighborhood vendors. The park remains a place where residents come to grieve and heal when tragedy strikes the Black community, like they did during the 1992 civil unrest. From literature and poetry, to jazz and hip hop, the 1.2 square-mile neighborhood possesses a unique creative energy that has attracted and inspired residents including Mayor Tom Bradley, Ray Charles and Terrace Martin. Leimert Park rests at the foot of Baldwin Hills and has historically been home to many of L.A.’s hard working African American families as well as various businesses and community assets. Leimert Park also hosts a thriving LGBTQ community. This neighborhood was the location for SouthLA Pride, an event to celebrate the LGBTQ community and is also home to the new South LA LGBTQ Center. All of this catalyzed the area being nicknamed “Black Greenwich Village,” as noted by film director John Singleton. Leimert Park has been a place for our people to come together for generations. However, this robust Black community was born from struggle and its progress represents a living manifestation of Dr. King’s dream of thriving Black communities.

Each year, the MLK Freedom Festival passes down his values of equality, love, and respect to new generations and reminds us all what it took to get here. Leimert Park was founded in 1927 as one of L.A.’s first planned communities. Until 1948, Blacks could not live west of Western Avenue. Restrictive housing covenants were initially created to keep Asians, Mexicans and Jews from moving into White neighborhoods. However, as the Black population in Los Angeles grew, these covenants were used to restrict their migration into White neighborhoods as well. Black residents went to great lengths to break the covenants. After the restrictive covenants were struck down by the Supreme Court in 1968, African Americans began to move west in greater numbers. First settling along Central Avenue in the 50’s and then further west to Crenshaw Boulevard and ultimately the community of Leimert Park. Martin Luther King Jr. was assassinated that same year.

African Americans are still impacted by racist systems that make it harder to amass wealth in comparison to their White counterparts. Policies like redlining — where banks refused to issue loans to communities of color — and predatory home loans continue to have a lasting impact on generational wealth.

Leimert Park continues to be an oasis of Black art and music and despite Los Angeles’ African American population declining for more than two decades, this neighborhood continues to have one of the highest concentrations of Black people in the city — 70%, down from the height of the 83% in the 1980s. Black-owned businesses like Hot n Cool Cafe and Eso Won Books continue the community’s legacy of art and activism. The median home price continues to rise and has more than doubled in the last seven years. Now, prices range from $600,000 to over $1 million according to Redfin. White families currently make up less than 10% of the neighborhood but some residents fear that number is growing too rapidly and that rising home prices will reduce opportunities for Black homeownership. Other homeowners are happy to see their home values rise and look forward to new amenities in their neighborhood but fear the rich history of Leimert Park might be lost in the process.

The annual MLK Freedom Festival celebrates Dr. King’s legacy and reminds residents that we still have some distance between us and his dream. The festival also educates new and existing residents on the neighborhood’s significance using music and art to pay homage to the rich artistic community in Leimert Park. All of the festivities are designed to educate, entertain and inspire residents to improve their communities. The festival activates Leimert Park and engages community assets like The Vision Theatre bordering the Historic Leimert Park Village with opportunities to engage residents.

This year’s theme, The Future is Now, aims to inspire all of us to take action and reminds us that we have the power and responsibility to shape our country and our neighborhoods starting today. In addition to food, music, and vendors, the festival will also help residents learn more about important issues affecting our communities. The empowerment tent will share information on the upcoming US Census and the importance of an accurate count as well as opportunities for jobs and community activism. There’s no better way to celebrate the legacy of MLK in South L.A  .

Overall, I feel like this article reads with two articles in one. We need to create more transition btwn the parade/festival and the area itself. The transition at the end back to the parade is abrupt. I like the overall themes and content but we need to work on this one a bit more.

Thanks for the feedback. I think I was able to make the connection between the two more apparent without it feeling forced. Let me know what you think about this revision,