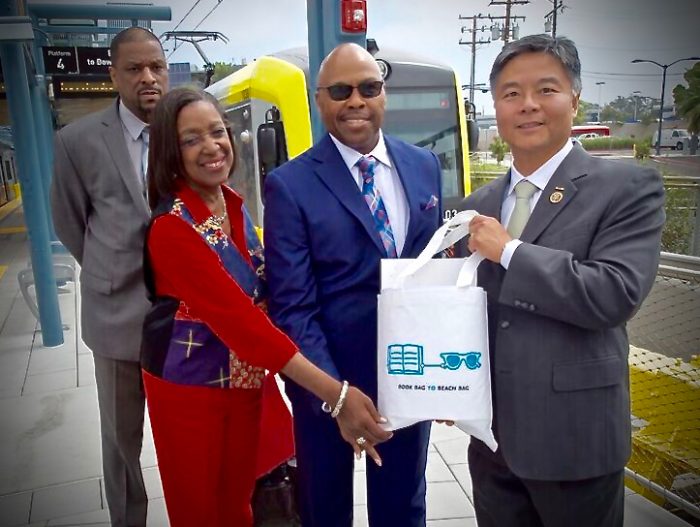 Congressman Lieu commented on the need for continued investment in our nation’s rail transit systems. “It was a pleasure to see, firsthand the completed Expo 2 line, which connects many diverse neighborhoods in California’s 33rd District from Santa Monica to downtown L.A.,” said Congressman Lieu. “The project demonstrates the value of supporting transportation infrastructure investments.”

While locally, Angelinos voted to pass sales taxes last year to cover some of the infrastructure cost.  Metro CEO Phillip A. Washington provided and overview of how successful infrastructure must work.

Washington continued, “We were a little discouraged by the proposed budget from this current administration on transportation, and concerned because the talk of one trillion dollars for infrastructure was not really reflected in that proposed budget. There were actually cuts in that budget and there was actually a call out of Los Angeles, Seattle, and Denver as being places that may not need federal dollars because we went out for sales tax initiatives. So, we are concerned but have not lost hope though and we still want to work with this administration on infrastructure investment but we were a little concerned with that proposed budget that came out a few months ago.”

Phase 2 of the Metro Expo Line project is 6.6 miles long and connects Santa Monica by rail to downtown Los Angeles and the rest of the 105-mile Metro Rail system that extends to the San Fernando Valley, the San Gabriel Valley, the South Bay, Long Beach and many points in between. Major construction began in 2012 and was completed in 2016.

Be sure to visit the Los Angeles Sentinel Facebook page to see an exclusive interview with Congressman Ted Lieu where he discusses Metro, Trump, Infrastructure, North Korea.