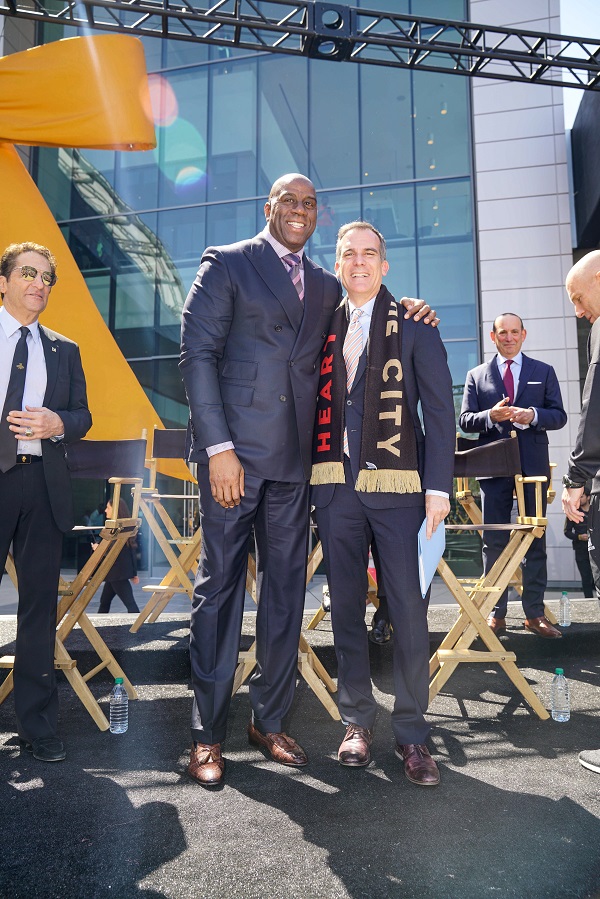 Last Wednesday, April 18, the Los Angeles Football Club (LAFC) and its partners made history with the unveiling of Banc of California Stadium, the home venue for LA’s newest sports franchise. The new soccer stadium stands where the once acclaimed LA sports Arena previously stood at the intersection of Figueroa and King. Living long past its glory days, the Sports Arena grounds were ripe for rebirth. The resulting transformation: A world- class football (soccer) stadium that finished ahead of schedule and spawned a grassroots soccer culture in South LA  and the adjacent neighborhoods.  Media personnel, club supporters, community leaders and collective LAFC partners and players were present for the culminating event.

The ribbon cutting ceremony marked the successful completion of a nearly 2-year project that started from a seedling of an idea to bring a soccer team to LA proper.

“We here have a lot to be thankful for and I’m glad just to be here to witness it,” said Supervisor Mark Ridley Thomas, who was on hand at the ceremony along with LA City Councilman Curren Price, US soccer legend Mia Hamm and her husband, LA native and former Major League Baseball star Nomar Garciaparra.  Also at the ribbon cutting was the ever-energetic sports mogul Earvin “Magic” Johnson, whose continual growing reach and influence in the LA sports scene has since cemented him as the face of LA sports. 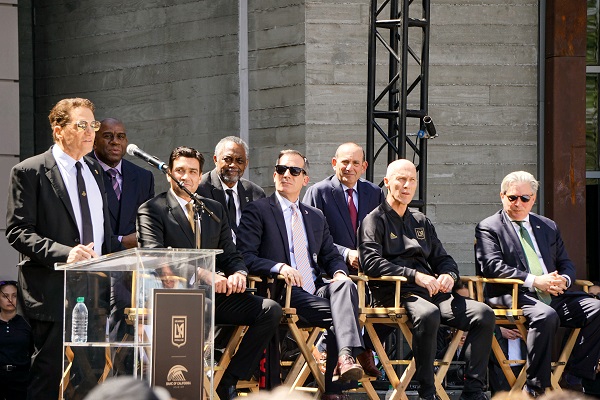 “It’s just a great honor to be here today,” said City Council President Herb Wesson. “I think we need to give a round of applause to all of the people that are here, all of the management, all of the ownership. But we should expect this from this great city because we are LA, we are a big city, we big, we do big stuff, that’s who we are and that’s how we roll, and when we come together anything is possible.

“I want to simply reinforce this point: this has exceeded expectations. There is no way you can come here and not marvel at what tremendous work has been done in record time, and this will have far reaching implications for how Los Angeles moves forward in terms of its powers from an economic point of view.” Ridley Thomas further stated that 190 billion of the creative economy, of which sports and entertainment is a major part of, represents 162,000 direct jobs in the city of Los Angeles.

“The county of Los Angeles is very proud to be home to this venue. 4500 new jobs right here. It’s about athleticism, it’s about culture, it’s about sport, it’s about opportunity, it’s about making Los Angles all that it can be and more, and I simply want to say LAFC, Southern California, the whole team, public and private partners arm and arm have made a huge statement that will be the envy of sports venues for years to come,” finished Thomas.

Councilmember Price spoke about the immediate impact Banc of California Stadium would have on the neighboring communities including in his District 9. “Bringing it back to the families and neighbors and friends living here in South LA, individuals whom I have personally met and now find themselves employed in guest services, security, housekeeping and food service positions here at the stadium,” Price proudly stated.

Magic Johnson noted how unique the LAFC grounds are relative to other stadiums in the country of any sport.

“This may be the only stadium where, right across the street there is affordable housing,” Johnson said acknowledging just how rare it is for a venue to be located so close to low-income housing, a sentiment that was regarded paramount throughout the audience as they applauded the statement. 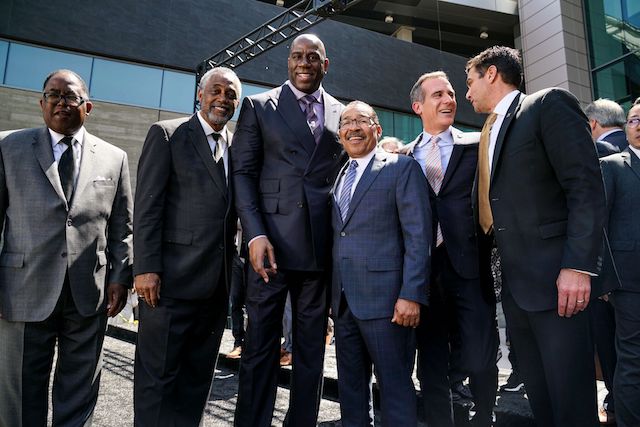 Two-time Olympic Gold Medalist and two-time World Cup Champion Mia Hamm talked with reporters after the ceremony about how important it was to have such strong support in the community from the beginning. “It was important to this team, this group, that they knew they had a seat at the table. They’re the heartbeat of this club, you know that energy that’s brought, yes, we have a large ownership group but we can’t bring the energy like they can, so we’re extremely grateful and appreciative for all and everything they’ve brought from day one and hopefully they’re proud of this stadium as well,” Hamm said.

“I think for them just to know that this club—that we’re—invested in this community, you know it’s not just using the space here for us to play matches, but we want to make and have a positive and lasting impact in this community–with our foundation– but also making sure that the people here know that they’re valued and I know we’re just at day one in terms of opening the doors but this is gonna be a big part of what happens in this community–.”

LAFC looks poised for an exciting home opener after coming off a win this past weekend against the Montreal Impact. Down 3-1, LAFC scored 4 unanswered goals to finish the game 5-3 and set a major precedent going forward. LAFC have their home opener this Sunday, April 29 against the Seattle Sounders, who come looking for redemption after losing the season opener to LAFC in Seattle.

Black Woman Golfer: It Was Like We Had Targets on Our Backs