Wednesday, June 10, Los Angeles City Mayor Eric Garcetti examined the progressive steps that will take place within the city budget. Garcetti acknowledged the three-layered crisis the world is experiencing together; health, economic, and social concerns have all increased and shown the perilous threat they have if left unchanged. 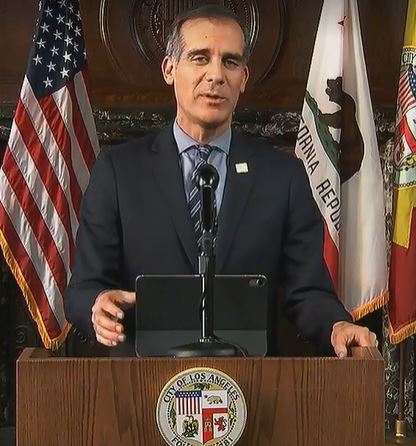 Protests in wake of the most recent injustices within the black community continued throughout the week, demanding for physical evidence of justice. The mayor declared this era to be a pivotal point for the city, and for the nation. Change must be supported by capital resources; Garcetti has vowed to review and funnel 250-million dollars from the city budget to be adjusted towards prioritizing underserved communities. “We’re changing our budget to make investments where we need them, 250-million dollars to start, in communities of color, for youth, for folks who are underbanked, and for those who don’t have the same healthcare, to deal with mental health.”

Regarding the direct police brutality captured by social media among protesters throughout L.A., Garcetti announced over 58 open investigations, to seek and reprimand any extreme force that were used on those who were peacefully protesting. Continual reform is happening throughout LAPD including the removal of certain physical holds to obtain individuals during an aggressive incident.

Garcetti updated the city on the COVID-19 pandemic spreading in the city, the infection rate has increased a little. The rate showcased for everyone person that contracted the virus, they will infect one other person. The ratio that represents that is 1.0, recent numbers show a slight increase showing a 1.4 ratio.

Over 20,000 can be tested for coronavirus daily in Los Angeles, this benchmark along with others has increased footing for the city to reopen more firm. The Mayor is working alongside the county public officials to deliberate Safer at Work guidelines. in order to open a breath of different sectors by June 12. Firms looking to open includes: gyms, professional sports ( without audiences), day camps, Museums, galleries, zoos, aquariums, campgrounds, RV parks and outdoor recreation, music, film, and television production, hotels and short-term rentals for tourism and individual travel.

the threat of COVID-19 is still prevalent, with over 30,000 positive cases in the L.A. city alone. The mayor stated contact tracing has been a great advocate in flattening the curve and combating the virus at the root of the spread. As of June 10, L.A. Public Health department announced 61 additional deaths and over 1,000 new positive cases in the los Angeles Region. In summary there are over 60,000 contracted cases within L.A. County. These numbers aligned with local government caution during the recovery stages of this pandemic. According to the county press release, there will be no hesitation if at any point the numbers of infection accelerate, there is a possibility for a recall on opening certain firms and putting the Safer at Home Order back in place.

Early Wednesday morning the mayor met with the Big City Mayor Coalition, formerly referred to as the Big 11 gathered to discuss the future steps towards facing homelessness. After the Room and Key Project expires many will be left to end up on the street if help is not there. Public Officials lead by Mayor Liccardo, strengthened their voice and requested for legislation to award approximately 950-million dollars for homelessness intervention and investment in the CARES Act. Breaking down the amount needed for both platforms, 350-million dollars will be used as flexible funding in terms of Homeless intervention and 600-million dollars will be funneled towards the CARES Act. The collective idea is to establish a generous budget for those who do not have enough.