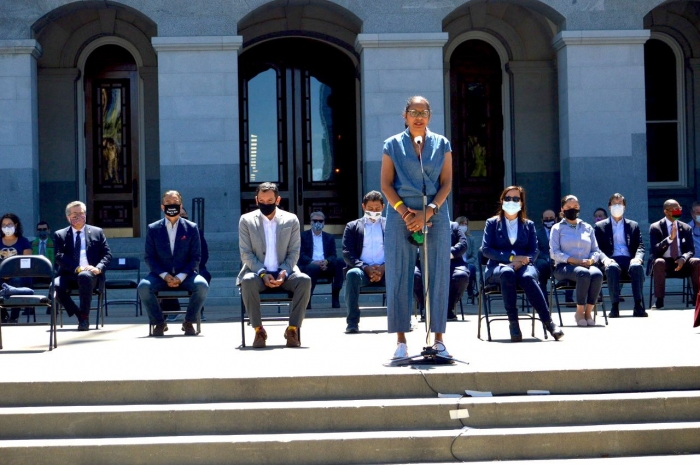 Shortly after members of the California legislature took a knee for eight minutes and 46 seconds at the California Capitol to protest racism and the death of George Floyd, Assemblymember Lorena Gonzalez (D-San Diego) took the opportunity to call out some of her Latino colleagues.

“I have to be honest, I’m disappointed with our Latino caucus,” Gonzalez said at the event that Assemblymember Syndey Kamlager (D-Los Angeles), a member the California Legislative Black Caucus (CLBC), organized.

Gonzalez said although some of the California Legislative Latino Caucus (CLLC) members have co-authored pieces of legislation with Black Caucus members, they have not been supportive enough of policy that can make a measurable difference in the lives of Black Californians. 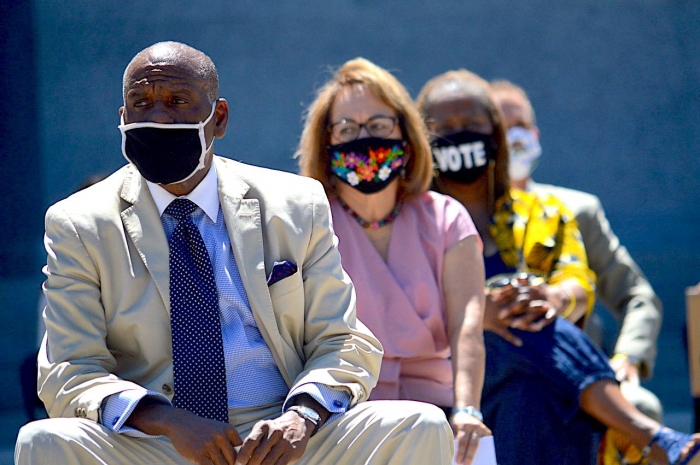 “As a caucus, we’ve been woefully silent on some of the issues that the Black caucus has put out there on police reform,” continued Gonzalez, who is chair of the Latino caucus. “We’ve felt a little uncomfortable taking those positions. We’ve been elected to make change. We actually have that power.”

Last year, Black lawmakers championed AB 392, which Gov. Newsom signed into law last October. It is now being lauded around the world as one of the strongest laws against police use of force in the United States.

“I’m angry. This is nice, a very respectful showing of love for a human being who was murdered,” Gonzalez said after her colleagues participated in the symbolic kneeling gesture. “But if the hardest thing you do is kneel for almost nine minutes, then you’re not working hard enough. Because this is a show.”

Senator Steven Bradford (D-Los Angeles), the vice chair of the CLBC, who helped to organize and promote the rally, said the event was important to him because justice compels everyone to take action and it demands accountability and equality.

“The governor always states that California is the next coming attraction,” Bradford told his colleagues that attended and the press covering the event. “Today we have an opportunity to star and play a leading role. That’s by passing the legislative Black caucus’ agenda.

Gonzalez reminded her legislative colleagues that over the next two weeks there are some difficult votes coming up and each of them has an “opportunity” to make lasting change in California. 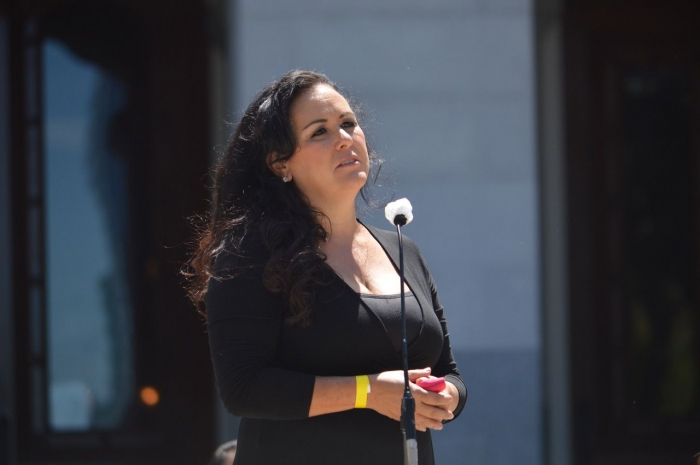 “What a privilege we’ve been granted by our constituents, who, right now, can only show their frustration by demanding more,” Gonzales reminded fellow lawmakers. “The only thing we can do is deliver. So, I hope this isn’t the end of it.”

The protest-slash-tribute took place in front of the California state Capitol’s West steps to honor the late George Floyd, who was killed by a Minneapolis police officer who pinned the unarmed Black man down during an arrest. The ex-cop, Derek Chauvin, pressed his knee on Floyd’s neck while the victim was handcuffed, crying out for help and his mama, with his face pushed down against the pavement.

Members of the Assembly, some Senators, constitutional officers, and representatives attended the affair where participants adhered to social distancing guidelines.

The sun was shining bright the morning of the rally, and the temperature in Sacramento had soared from mild to about 90 degrees by midday.

Kamlager looked to the weather and asked the audience to imagine what Black men, women and children, who were killed by former and current police officers, would be doing.

“This would be a day to do all those things without fear, except if you were Black,” Kamlager said.

The event was held the same day Floyd was laid to rest next to his mother in Houston.

Sen. Scott Wiener (D-San Francisco), chair of the LGBTQ Caucus, shared how protests against police harassment of gays in New York City brought about policy change for the LGBTQ community.

Wiener also pointed to when mass incarceration of Black people began in California.

Wiener said in the 1970s, ‘80s, ‘90s, and onward, California went from 10 prisons to 30 penal colonies, and police brutality is a part of the equation, Wiener said.

“California helped to pioneer mass incarceration in this country. We built prison after prison and we still haven’t shut down a prison,” he said. “Mass incarceration and police brutality are not separate cancers. They are symbiotic cancers that feed off of each other and strengthen each other.”

Wiener, who acknowledged “notable wins” in policies addressing police brutality and unfair prison sentencing, also said that it’s been a fight to pass police and prison reforms at the State Capitol. Legislators have to step it up a notch to pass more bills, he said.

Gonzalez urged her colleagues to unite and support legislation that will benefit all Californians from all racial,, cultural and ethnic backgrounds.

“Unlike so many frustrated protesters, young people, people in the Black community, people in the Latino Community, and people who are facing this every day, we have the opportunity to immediately do something about it. And shame on us if we don’t,” Gonzalez said.