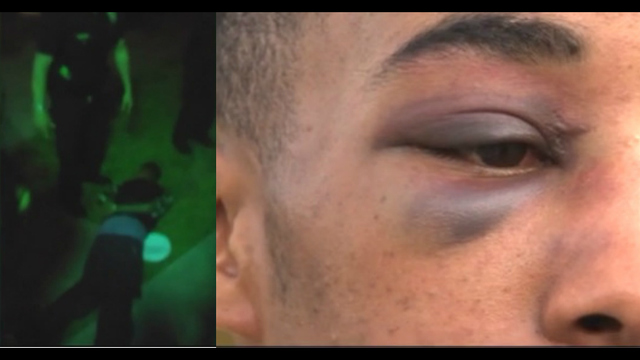 Twenty year old Taaj Williams shows his black eye to reporters. Williams alleges the injury was the result of excessive use of force by Los Angeles police officers (Courtesy Photo)

The Los Angeles Police Department has launched an internal investigation after video surfaced showing a handcuffed young man who had been detained by officers appearing to be unconscious last weekend on the city’s Westside.

The footage aired by Fox11 last Tuesday initially shows officers standing by two men whose hands are cuffed behind their backs. One of the officers then moves one of the men, who identified himself to the television station as 20- year-old behind a wall.

The camera doesn’t capture what happens next, the Los Angeles Times reported. When Williams is next seen a few seconds later on the other side of the wall, he is almost on the ground, face down. The officer, who is holding Williams’ cuffed hands, then drops him on the pavement. Williams is limp in the video.

“Did he just knock him out?” a voice says on the recording. “He just knocked him out.”

Later, video showed Williams on his feet, pressed against the hood of a police car as officers searched him, according to The Times.

Capt. Patricia Sandoval, an LAPD spokeswoman, told The Times that the department opened its internal inquiry after it became aware of the footage, shortly before it aired Tuesday. Investigators are interviewing witnesses and officers and reviewing video “to determine what did happen behind that wall,” she said.

Sandoval said officers Saturday responded to the area, near the 4400 block of Inglewood Boulevard in the Del Rey area of the city, after receiving multiple reports of two groups of people fighting. Officers detained the two men in the video because they thought the men might be involved, she said, adding that neither was arrested.

Williams told Fox11 that he and his friend were victims in the fight. An officer put his arm around Williams’ neck while he was handcuffed, Williams said, then “slammed me on my face.” Williams had a black eye during the interview and blamed it on the officer’s actions.

His mother, Tyeesha McDonald, who can also be seen in the video, told the station her son was unconscious for several minutes.

“I thought he was dead,” she said.