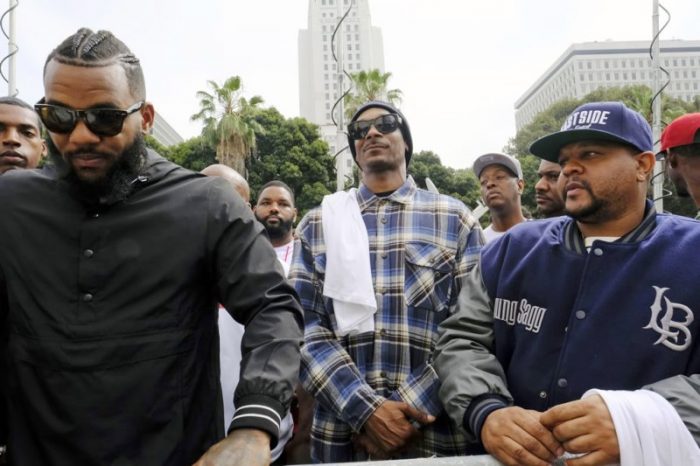 As the July 8, 2016 LAPD graduation ceremony was taking place, a group of protesters gathered on a nearby sidewalk, with rappers The Game (Left) and Snoop Dogg (Center) among them, but they did not attempt to disrupt the proceedings. (AP file photo)

Los Angeles police Chief Charlie Beck, in somber remarks last Friday to a graduating class of new officers, pointed to a mourning band on his badge that honors the memory of the five Dallas police officers killed in a shooting in that city.

“To think that members of a fine police department such as Dallas P.D. were targeted because of the uniform they wear, because of the job they do, because of the love they have for American freedom is beyond belief; it is beyond sad,” Beck said at a ceremony in front of police headquarters in downtown Los Angeles.

“Ten thousand Los Angeles police officers — including you — put on mourning bands today,” Beck said. “But these mourning bands are a symbol that cannot express the pain in our hearts.

Beck called for the country to have a dialogue that does not break down along racial lines.

“We must move beyond that,” Beck said. “This not about black lives; not about brown lives; not about blue lives. This is about America.” At the same gathering, Los Angeles Mayor Eric Garcetti said, “The officers who died in Dallas didn’t just die as heroes — they lived as heroes.”

As the ceremony was taking place, a group of protesters gathered on a nearby sidewalk, with rapper Snoop Dogg among them, but they did not attempt to disrupt the proceedings.

Earlier, it was announced that all Glendale Police Department and Los Angeles County Sheriff’s Department patrol personnel were under orders today to pair up following the shooting that claimed the lives of five police officers in Dallas.

The Los Angeles County Sheriff’s Department order was made “under an abundance of caution,” said Deputy Guillermina Saldana of the Sheriff’s Information Bureau.

Glendale police Chief Robert Castro also issued an order for two-officer patrols, the Glendale News-Press reported. Castro ordered the redeployment as a precaution, as there are no known threats to Glendale police, police Sgt. Robert Willam told the newspaper.

“Today is another tough day for law enforcement,” Castro wrote in a department-wide email. “I want you and your families to know that I am proud of the outstanding work and sacrifices by each of you everyday. There is no greater worry for me, as your chief, than your safety and health.”

In a tweet earlier today Beck called the killings a “tragedy beyond belief.”

“Blue lives matter, they are willingly given and senselessly taken,” Beck wrote on Twitter.

“LA County Sheriff sends compassion and prayers to those families who lost loved ones today,” a department tweet said.

On Thursday, Los Angeles Mayor Eric Garcetti tweeted Thursday, “Our hearts are with all of the victims and their families in Dallas. The horrific violence against @DallasPD is an attack on our democracy. All Americans must unite against hate, join together in peace+justice.”

California Attorney General Kamala D. Harris said in a statement this morning that “the horrific tragedy in Dallas is a grave reminder of the dangers our law enforcement officers face each day in service of their communities.”

“I pray for the officers who lost their lives, for their grieving families and our law enforcement brothers and sisters in Dallas,” said Harris, who is scheduled to address the first meeting of the Racial and Identity Profiling Advisory Board today in downtown Los Angeles.

“Violence only increases distrust and anger. I know firsthand that the relationship of trust between law enforcement and the communities we are sworn to serve is reciprocal. We honor the courage and sacrifice of law enforcement as we continue the important national dialogue around reforming our criminal justice system.”

The LAPD was “closely monitoring” the situation in Dallas with officers ready to respond to any situation from any point, Officer Tony Im said. As of this morning, the LAPD had not been placed on tactical alert, and had not been ordered to deploy only two-officer patrol cars, said Officer Drake Madison.

The Los Angeles Police Protective League, the union that represents the LAPD rank-and-file, issued a statement this morning that said in part:

“Our prayers and deepest sympathies go to the families and friends of the Dallas Police officers and Dallas Area Rapid Transit officers who were killed and injured in last night’s abhorrent acts of violence.”

“We also pray for the recovery of those officers who are severely injured so that no more families have to feel the pain and anguish of losing their loved one,” the protective league said in a statement. “To hunt, target and murder law enforcement officers who were working to protect the safety and the first amendment rights of protesters is pure evil.”

The Los Angeles Times, meanwhile, reported the slayings through a device now rarely seen — an extra front page for its print edition.