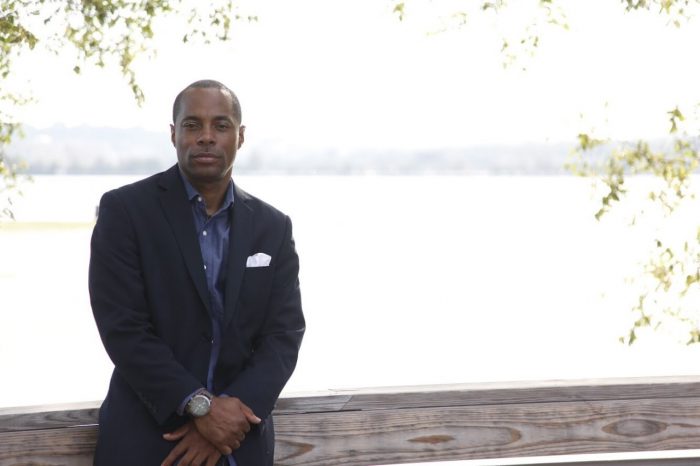 Lamont Cary turns his life around and gives back through literature and motivational speaking. (Photo by April Sims)

Lamont Carey has taken his past and created a new future in literature, spoken word, motivational speaking and criminal justice reform.

Growing up in Washington, D.C., Carey saw family members and loved-ones arrested and harassed by police officers. He became a target himself, when he started selling drugs at the age of 11. Police were an enemy for Carey and at 16-years-old, he was charged as an adult for armed robbery along with selling guns and drugs. He would go on to serve 11 years in prison.

“I built up a dislike for police because every time I saw them, they were hurting or taking away someone that I love. What I didn’t know as a kid was that the people who they were arresting were criminals,” said Carey.  “I can’t blame them because in all honesty, I was a drug dealer, gun slanger and armed robber; but at 16 to stack all of these charges on you and threaten you with a life sentence, I think it’s unfair.”

At the time, battle rap was popular and Carey would battle different inmates for fun. One of Carey’s inmates told him that he was a good story teller and challenged him to write a book. Carey took the challenge on and it became a turning point in his life. His first book, The Hill, was a hit in prison and when Carey was released, he thought about publishing it. However, with not much of a following, he couldn’t find a publisher who was willing to give him a fair percentage of the sales.

Carey decided to put publishing the book on hold and got into spoken word poetry. At first Carey was just going to poetry clubs to listen, but after heckling a few of the hosts, he got called out to come to the stage and perform. Carey freestyled on the spot and got a great response from the audience. He decided to go back the next week with something written and not only did he get an applause, but an audience member asked for a copy of his poem on a CD. Once Carey started recording his poetry, he became popular on the poetry scene, so popular that he received a call from Russel Simmons, himself, to be on the television show, “Def Poetry Jam.” Spoken word poetry became Carey’s first major platform.

“People wanted to hear my poetry in other countries and some of the countries, I couldn’t even travel to because of my felony conviction,” said Carey.  “A lot of my poetry is on criminal justice reform and mental health. The biggest problem I have with the criminal justice system is that I made mistakes in my past, but now I have been home over a decade and that criminal record still infringes on my rights to be able to thrive and move about.”

Lamont Carey speaks with 200 youth with disabilities to motivate them to create the life they want. (Photo by Melanee Woodard)

Once Carey had a following, he decided to publish the book that he wrote in prison, The Hill, which became a three-part fiction series about life in prison. Carey also worked with a school district in Albany, N.Y. to publish a poetry book for students to use in class along with a book about using art to be an entrepreneur. His latest novel, Dead Before 18, guides young men in finding positive ways to handle anger and stay out of trouble.

Along with literature and poetry, Carey also does motivational speaking and runs two companies. One of his companies, LaCarey Enterprises, focuses on helping youth express themselves though art, literature and spoken word. His other company, Contact Visits, helps formerly incarcerated people transition back into society. One of Carey’s main goals is to improve the criminal justice system. While he has been fortunate with success, he realizes everything that is stacked against criminals, even after serving their time.

Carey is dedicated to helping the formerly-incarcerated see their value and change their futures. He also works with youth regularly to keep them on the right path. For more information on Carey’s businesses, visit www.contactvisits.org and www.lacareyenterprises.com. You can also find Carey on all social media platforms @LamontCarey.