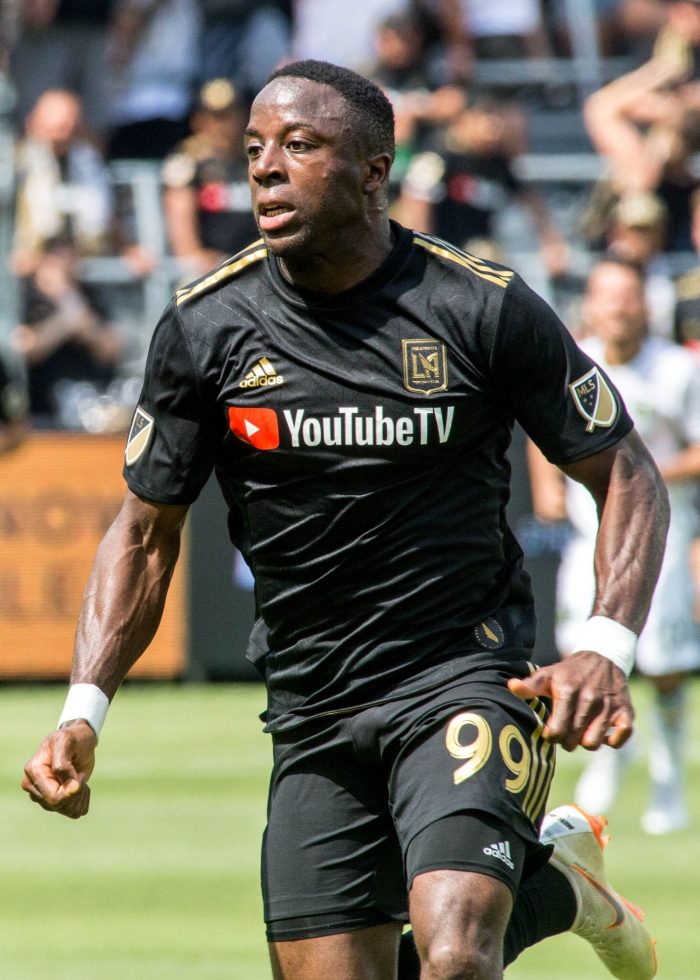 Adama Diomande has nine goals in just seven appearances for LAFC, but was unable to find the back of the net against Portland. (Robert Torrence/L.A. Sentinel)

The Black and Gold were back in action at home on Sunday, July 15th against the Portland Timbers. LAFC also parted ways with fan-favorite defender Omar Gaber, who was sold by his parent club F.C. Basel in Switzerland, to Pyramids F.C. in his native Egypt.

There were two major questions looming ahead of game time. The first was how coach Bob Bradley would manage the plethora of attacking talent at his disposal, now that his stars from the World Cup have returned; he has a problem most would say is good to have. The second was how the players on both sides would respond to the boiling temperatures at kickoff.

Coach Bob Bradley had stated earlier this season that everyone, players and fans included, would rather see a later kickoff time, as soccer is played at its most competitive level in more moderate temperatures.

The contest would seem to prove Mr. Bradley right. Over the course of the 90-minute exchange, both teams struggled tremendously to find their form.

Portland almost struck first in the 5th minute when Portland’s Diego Valeri nicked the ball off the feet of LAFC midfielder Benny Feilhaber at the top of the box. Valeri quickly took a few strides into the 18-yard area and attempted to curl the ball around LAFC keeper Tyler Miller albeit unsuccessfully. The chance was ultimately snuffed out by Miller who pushed the ball clear of goal.

In the 11th minute, the game opened even more. Carlos Vela received an overhead pass in the box but floundered his shot on goal which was easily caught by Portland’s keeper, who quickly put it back into play and nearly caught LAFC out on the counter-attack. Luckily for LAFC, Tyler Miller had himself a game to remember and thwarted the shot from Portland with ease.

In the 17th minute, Portland was controlling the ball well in the midfield. The ball eventually found the feet of the reigning MLS MVP Diego Valeri who tried to cheekily chip Tyler Miller from about 30 yards out. The LAFC keeper would have none of it on the day, and calmly collected the ball from the air.

With neither team able to fully expose the other, Portland continued their long range attempts on goal. In the 29th minute, LAFC lost possession in midfield and the Timbers Sebastián Blanco tried to catch Tyler Miller off guard from nearly 40 yards out this time. The shot was caught and held convincingly by a diving Tyler Miller, who continued his brilliant form.

In the 31st minute, LAFC almost had one of their own, when LAFC defender João Mountino chipped an exquisite overhead ball to Adama Diomande, who was maneuvering inside the box and with amazing technique, volleyed the ball first time towards goal, eliciting a save form Portland’s goalkeeper Jeff Attinella.

In the 49th minute, Portland almost opened the deadlock when Samuel Armenteros received the ball inside the box and rebounded the ball off the far post to the relief of Tyler Miller and the rest of the LAFC faithful.

Portland yet again had another attempt in the 70th minute narrowly falter. Samuel Armenteros executed a nifty back-heel pass into the path of a streaking Sebastián Blanco inside the 18-yard box, who wrought out another sublime save from LAFC goalkeeper Tyler Miller.

In the 84th minute. Sebastián Blanco, who had been giving LAFC problems all day obtained possession in LAFC’s half. LAFC midfielder Lee Nguyen tried to stop the momentum with a hard lunge, sending Blanco to his feet and then to the ground. Then, in a turn no one expected, Ngyuen was shown a straight red card for his semi-cynical challenge and sent off for the remainder of the match.

Portland were unable to exploit the one-man advantage for the remaining minutes of the match and both teams would have to concede the three points and settle for the one apiece.

LAFC are now three points out of first place behind FC Dallas sitting in second, just two points ahead of third place Sporting Kansas City in the Western standings. The Black and Gold will host their crosstown rivals the LA Galaxy, next Thursday, July 26th.