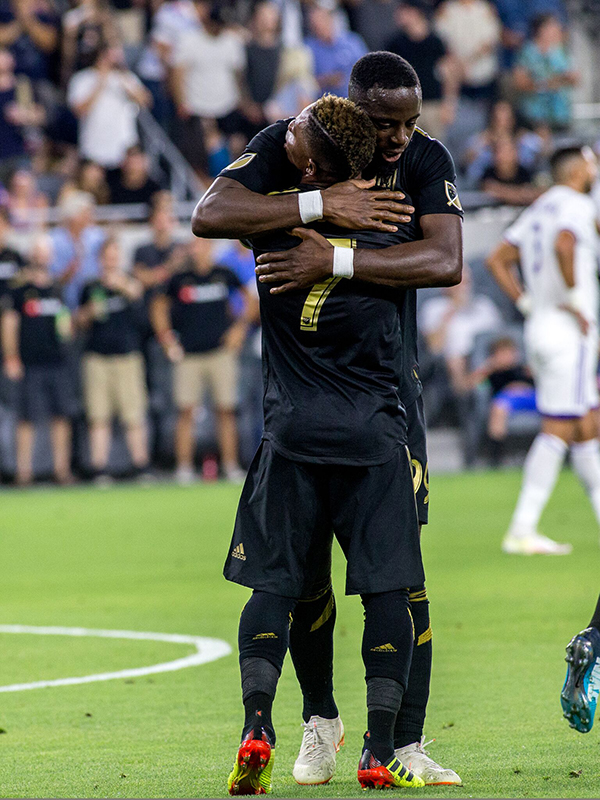 LAFC was tasked with another two-game week as they traveled to Houston to take on the Dynamo on Tuesday, July 3rd, and then hosted Orlando S.C. a few days later on the 7th.

LAFC’s potent attack continued in the early stages of their contest with Houston. In the 5th minute, red-hot forward Adama Diomande received a pass from LAFC midfielder Lee Nguyen at the top of the 18-yard box and with excellent vision, caught Latif Blessing making a run in the box and slipped an inch perfect through ball in the path of the sprinting winger and seamlessly shot the ball with a curling side-footed effort past Houston’s keeper to take an early 1-0 lead.

Just moments later in the 7th minute LAFC midfielder Mark Anthony Kaye tried his luck from distance with a 35-yard rocket that flashed just wide of Houston’s goal. The rest of the first half was more routine and rudimentary as both sides failed to convert their chances.

The Dynamo must have received a stern talking to from their manager at halftime because the start of the second half saw a different Houston side. In the 50th minute, Dynamo forward Mauro Manotas elicited a beautiful save from LAFC goalkeeper Tyler Miller, when his run through the midfield gave him a clear shot on target but was parried away out of danger.

In the 53rd minute, LAFC tried to answer the scare with Latif Blessing, who almost successfully gifted the ball to Adama Diomande for their second on the night. It was not until the 72nd minute when Mark Anthony-Kaye gathered possession in the midfield and with a quick one-two pass sequence with Adama Diomande, received the ball and continued his run into the 18-yard box where he confidently nestled the ball into the side-netting to put LAFC up 2-0.

Unfortunately, that was the peak of LAFC’s performance for the night.

In stoppage time, in the 90th +3rd minute, a rare mistake from LAFC captain Laurent Ciman allowed Dynamo forward Mauro Manotas to break past the defense and slot the ball past Tyler Miller to cut the lead to one goal.

Then, in the 90th+6th minute, Houston won a corner. The ball found the head of a Dynamo player and then to the foot of Houston defender Philippe Senderos, who kicked the ball as hard as he could and to the detriment of LAFC, it ricochet off the leg of Mark Anthony-Kaye and into the LAFC goal to tie the game at 2-2 with only seconds left. Within minutes, LAFC went from what could have been a 2-0 victory to having to settle for a 2-2 tie at game’s end.

The second game LAFC played this week was against Orlando City SC. Disappointed from their late-game meltdown in Houston a few days earlier, the Black and Gold looked to get back into form at home, and with their prodigal stars, including Maro Ureña (Costa Rica), Omar Gaber (Egypt) and of course their creative maestro Carlos Vela (Mexico), all home from the World Cup after their respective national teams failed to progress in the tournament.

LAFC seemed determined to erase the defensive meltdown they suffered in the last game and made mincemeat of a struggling Orlando SC team. In the 28th minute, LAFC winger Latif Blessing crossed a dangerous ball into the box that was poorly dealt with by an Orlando defender, eventually finding the feet of Mark Anthony-Kaye who quickly passed it to Diomande, as Diomande made no mistake putting the ball away for the 1-0 lead.

In the 32nd minute, LAFC winger Aaron Kovar received the ball in stride, closing in on Orlando’s goal. Kovar picked up a streaking Latif Blessing on the opposite side of the box and slotted the ball into the path of Blessing who basically shot on an open net making it 2-0.

LAFC goalkeeper Tyler Miller had himself a monster of a game. Orlando almost converted a free kick into a goal in the 52nd minute. Orlando captain Sacha Klejstan curled a whipping ball into the top corner, but Tyler made himself too big to deny, saving a sure goal.

Klejstan would have his revenge however, because in the 59th minute, the former United States international made a gripping run into the eighteen-yard box and beat Tyler Miller to cut the deficit to 2-1.

Not satiated, LAFC were hungry for more. In the 82nd minute, Adama Diomande, who was denied his second goal by a narrow offside call, executed an unconventional bicycle kick that bounced off the crossbar and behind the goal line toad another after a scramble in Orlando’s box.

Up 3-1, LAFC showed no mercy. After a great hold up play by Adama Diomande, Latif Blessing picked up the ball off Diomandes dribble into space. A streaking Diego Rossi called for the ball on the other side of the box and in a nearly identical fashion to their second goal, passed the ball assertively past Orlando’s keeper for a resounding 4-1 victory.