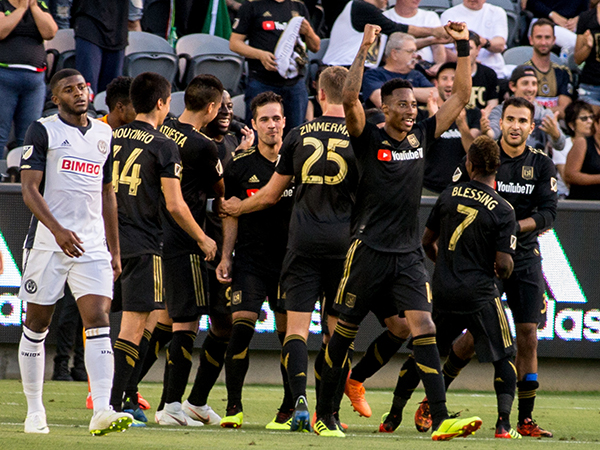 The LAFC is 2nd in the Western Conference with a 9-1-7 (Robert Torrence/L.A. Sentinel)

Having already clinched a playoff berth, LAFC looked remain vigilant in their first season as an expansion team. The match, which ended in a 2-2 draw was all LAFC needed to break the expansion team record with 57 points in an inaugural season. A great achievement overshadowed by how the match unfolded.

On Sunday Oct. 20, LAFC donned their home kits for the last time in the regular season. Complete with comedian and part-owner Will Ferrell leading the supporters section for a few moments during the first half, The Black and Gold had a stadium full of supporters ready for the regular season home sendoff.

LAFC struck first and fast when Carlos Vela found Diego Rossi running in the box and Rossi, with a deft first touch, kept the ball away from the Vancouver defender on his back and slotted the ball past the keeper for the 1-0 lead all within the first 5 minutes of play.

In the 12th minute, LAFC nearly doubled their tally when Carlos Vela in possession at the top of Vancouver’s arch tried to finesse a curling shot, hitting the woodwork with the impressive attempt.

LAFC would, however, find the insurance goal in the 15th minute, when Carlos Vela once again acting as the puppet master, found a streaking Aaron Kovar on the right side. As Kovar approached the goal line, he passed it back into the box looking for Adama Diomande, yet the ball with plans of its own, trickled through the porous defense and found its way to Diego Rossi, who hit the ball first time, ricocheting off of the Vancouver keepers hands and into the side netting to make it 2-0 LAFC.

It was not long however, before Vancouver would be the ones putting LAFC on the ropes. In the 21st minute, Whitecaps winger Alphonso Davies made a brilliant run on the left wing and cut inside, beating two LAFC defenders before being caught and taken down in the box by Benny Feilhaber, granting Vancouver the penalty. The penalty was converted and in the blink of an eye, the score was 2-1 LAFC in just the 22nd minute.

In the 35th minute, Adama Diomande had possession of the ball on the right wing and was fouled and given the advantage to play on. After quickly finding his feet again, Diomande crossed the ball dangerously into the box where it found Diego Rossi, who narrowly missed the shot with the half volley almost adding to his brace for the hattrick.

The score would remain 2-1 at halftime.

The second half saw less goals than the turbulent first. In the 65th minute, Vancouver substitute Jordan Mutch laid claim to one of the goals of the season, when he shot a rocket from nearly 40 yards out, beating Tyler Miller and leveling the scoring to two apiece.

Neither team was able to capitalize further on their chances, resulting in the 2-2 draw, a result that felt like a loss to LAFC and a victory for visiting Vancouver. The one point from the draw was still enough to push LAFC to 57 points, breaking the record for expansion teams in their inaugural season. No small feat to be sure, but definitely not the endgame for The Black and Gold, who have ever more heightening aspirations.

LAFC play their last game of the regular season away at Sporting Kansas City on Sunday, Oct. 28.