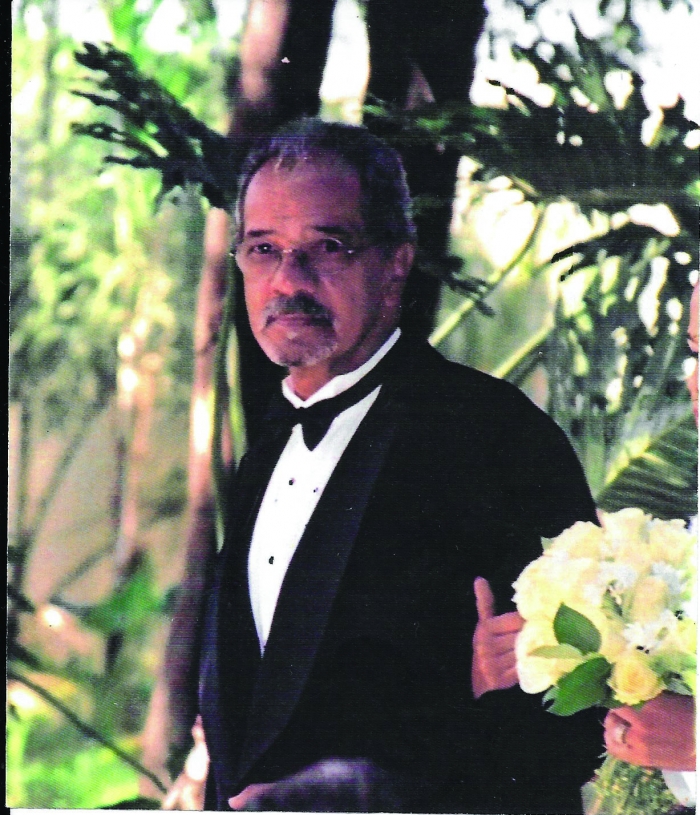 LA Sentinel veteran columnist, Larry Aubry has passed.   No one can deny that Larry was an uncompromising, relentless, no-holds-barred warrior for social justice.  For decades, he fought to improve conditions for African Americans in Los Angeles, but other minorities – such as Latinos and Koreans – also benefitted from his strident advocacy for equal rights.

Aubry’s beliefs were likely nurtured during his early childhood in New Orleans, Louisiana, and further instilled when he and other Black students integrated L.A.’s Fremont High School in the late 1940s.  His commitment to the cause continued when he served in the U.S. Air Force in the 1950s and firmly cemented by the time he graduated from UCLA in 1959.

So, when he was appointed to the L.A. County Human Relations Commission in 1967, it was a platform for his passion for social justice and opportunity to elevate the topic on a broader scale.

He informed thousands of people through his column, “Urban Perspective,” which ran in the L.A. Sentinel for nearly 40 years, and through his activism with organizations such as the NAACP and the Southern Christian Leadership Conference. Also, he was vice president of the A. Phillip Randolph Institute and on the founding committee of the Black Workers Center.

“My father was a great activist and champion for Black people, which by definition, makes him a great humanitarian,” explained his daughter, Erin Aubry Kaplan. “He refused to bend to a popular belief that Black justice was too narrow or too polarizing, that it had to take a back seat to other kinds of justice, that its time had passed; he knew better, he stood firm, and history caught up with him.”

His son, Mark Arhomuz Aubry, had a similar assessment, noting, “My father was called to action on behalf of Black people.  He had such love and compassion for Black people and really wanted them to have a better life.”

The indelible mark that Aubry left was affirmed by the countless tributes issued to mark his passing on May 16, at the age of 86. L.A. City Councilmembers Herb J. Wesson, Curren Price, Jr., and Marqueece Harris-Dawson, who sponsored a motion on May 19 to adjourn the council meeting in Aubry’s memory, reminisced about his leadership on the Black political scene. Also, several of his fellow activists, former colleagues and longtime friends, shared insight about Aubry’s impact on their lives.

Danny J. Bakewell, Sr., Sentinel executive publisher, knew Aubry for years and worked closely with him on several civil rights campaigns. Expressing his thoughts, Bakewell said, “I cannot say enough about Larry.  I worked with him on numerous issues facing our community, both during my time as president of the Brotherhood Crusade and here at the Sentinel.  Larry was a friend;, he was dedicated and uncompromising when it came to uplifting and fighting for the betterment and quality of life for African Americans here in Los Angeles and throughout the nation.

“Larry was not only dedicated to our people, but he was also a loyal columnist and supporter of the Black Press, and in particular, the Los Angeles Sentinel.  His weekly column and the passion in which he wrote about the needs, issues and circumstances of our community was one of the cornerstones in making the Sentinel the number one newspaper here in Los Angeles and throughout the nation.  We will all miss Larry and our thoughts and prayers go out to his entire family.” 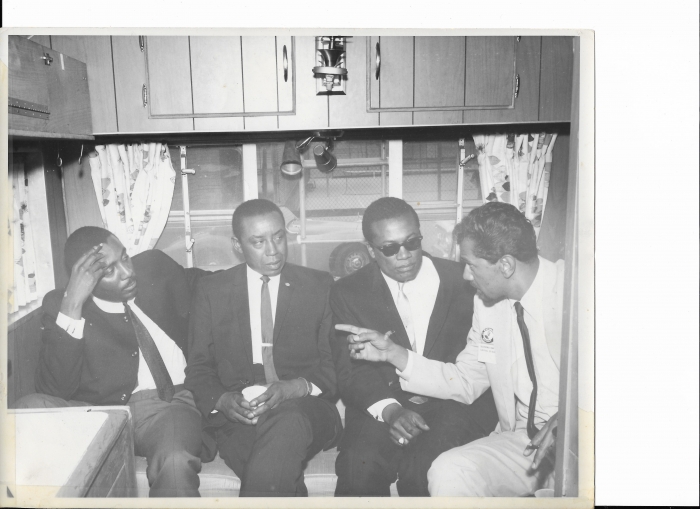 Aubrey, right, confers with Dick Gregory, left, and other activists in the 1970s. (Courtesy photo)

Dr. Maulana Karenga, chair of the Department of Africana Studies at CSU – Long Beach and executive director of the African American Cultural Center (Us), imparted another eloquent reflection describing Aubry’s death as “a great and irreplaceable loss to our community and our ongoing struggle for racial and social justice.”

Larry and I worked together over the years as friends, cooperating leaders, co-chairs, co-workers and co-combatants in the struggle,” said Karenga.

“We had known each other since the 1960s, when he was executive director of OIC (Opportunities Industrialization Center) and I served on the board for him as chair of my organization, Us. Most recently, we worked together to found and build the Black Community, Clergy and Labor Alliance, where we served together as co-chairs until his passing. As a community leader, he saw leadership as a moral vocation and acted accordingly,” Karenga said.

Aubry’s unwavering dedication to social justice inspired those who worked with him at the Sentinel as well.  Former L.A. City Councilmember Robert Farrell, who later served as Sentinel political editor, recalled Aubry’s activism and popularity from an early age.

“In the more than 60 years that I have known Larry Aubry, he has been involved in activities to better the quality of our lives and that of others here, throughout America and the Diaspora. He was ‘unapologetically Black,’ and active in the leadership of many of our community organizations,” noted Farrell.

“There is no one who is anybody that he did not know, or knew about him. Larry Aubry addressed challenges to our community and assisted in the growth and development of our current and future political and cultural leaders. His mission was focused – breaking down barriers that prevent Black people from obtaining what they deserve, and encouraging them to be their best selves. His rich legacy is a life of advocacy and activism, a job well done.”

Kathy Williamson, communications director for Assemblymember Mike A. Gipson and former Sentinel managing editor, remembered, “Larry Aubry was a consummate journalist and a dedicated activist. His columns were perfect storms of passion and facts. When he put pen to paper, it was to expose injustice and institutionalized racism. Larry took no hostages. He seamlessly merged institutional knowledge with current affairs. His thirst to share information and his drive to elevate Black lives was inspirational. Larry will be sorely missed.”

James Bolden, public information officer for the L.A. County Department of Social Service and another former Sentinel managing editor, insisted, “Larry Aubry never backed down on an issue important to the Black community. He was real – the fearless columnist who not always gave the Black community what they wanted to hear, but what they needed to know.” 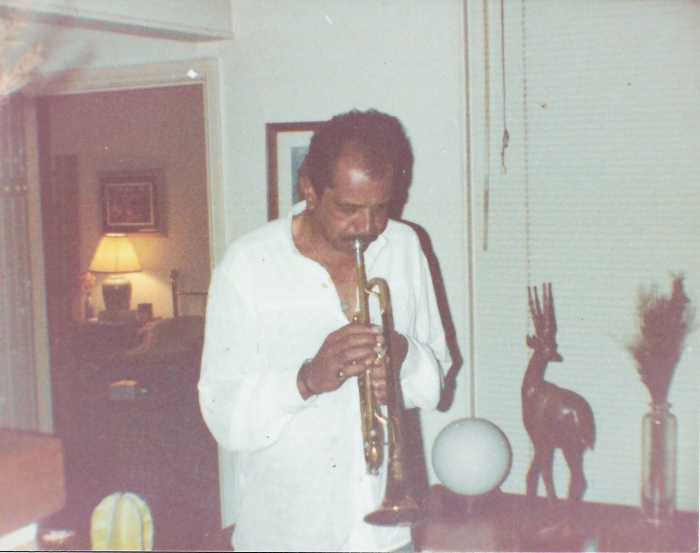 Aubry played the trumpet throughout his life. (Courtesy photo)

David G. Brown, Sentinel political cartoonist, simply stated, “Larry was an inspirational educator, writer and civil rights advocate! I am honored to have known and worked with him.”

Aubry left positive impressions on others throughout his life. Born in New Orleans on Oct. 5, 1933, he and his family relocated to Los Angeles in 1942. According to Farrell, Aubry “proudly called himself an ‘Eastside Boy,’” a designation that referred to his upbringing on the Eastside, a primarily Black neighborhood in South Central L.A. that developed around Central Avenue.

After graduation from Fremont High School in 1950, Aubry served in the Air Force before attending Xavier University, followed by UCLA, where he earned a degree in psychology. Later, he completed graduate studies in public administration at USC and worked as a county probation officer.

When Aubry was later named to L.A. County Human Relations Commission, he was already heavily involved with several grass-roots organizations, including the Black Latino Roundtable, the Black Korean Alliance and the Multicultural Collaborative. Also, Aubry’s focus on equality in education was enhanced by his role as vice president and education chair of the NAACP – L.A. Branch as well his serving two terms on the Inglewood Unified School District Board. 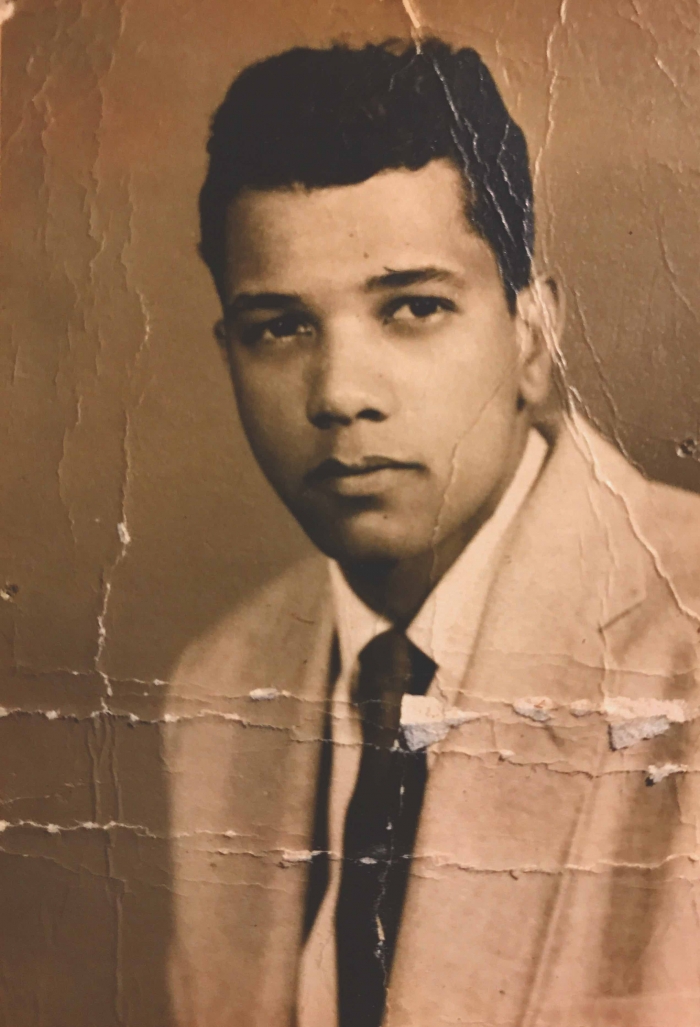 In addition, Aubry was a co-founder of other social justice groups. Following the Devin Brown shooting in 2005, he helped start the Community Call to Action and Accountability (CCAA), a prototype of Black Lives Matter, which he also supported. Aubry also played a part in establishing the Black Community Clergy and Labor Alliance (BCCLA), a group that fostered unity among people working for racial justice, and the Advocates for Black Strategic Alternatives (ABSA), a policy discussion group.

Larry was also a jazz aficionado who played the trumpet professionally (jazz and symphonic) as a young man and continued playing for much of his life.

“To rightly remember and honor Larry Aubry is to recognize and appreciate the long-length and variedness of his service for the good, the depth of his love for his people, and his uncompromising commitment to their struggle for liberation and racial and social justice,” added Karenga.

“It is also to appreciate his commitment to his family and how he linked family and community and his obligations to both. Larry Aubry will be greatly missed and will always serve as a model and mirror of dedication, discipline, sacrifice and honored achievement.”

Aubry was married for 64 years to his wife, Gloria. They have five children: Mark Arhomuz, Kelly, Kris, Erin and Heather. Also, six grandchildren, as well as a large extended family of nieces, nephews and cousins survive him.

Condolences may be emailed and the family contacted at [email protected]