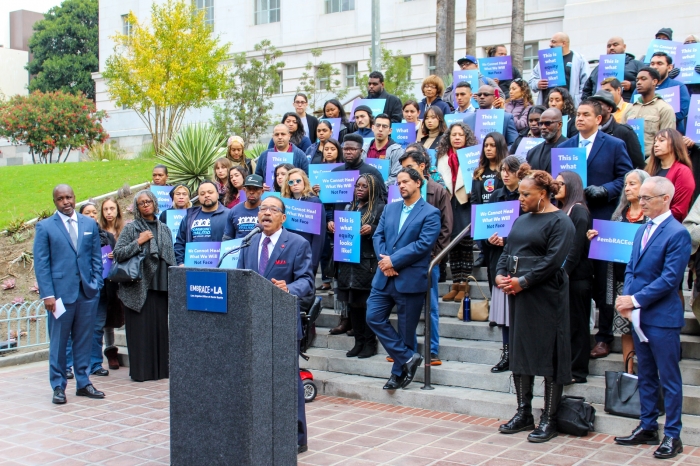 The Los Angeles City Council has unanimously approved an initiative calling for the creation of an in the city of Los Angeles. The office would work to eliminate structural barriers and ensure opportunity and resources are fairly and justly distributed so all Angelenos are treated equitably, empowered, and can fully participate in the city’s democratic processes. The motion was co-introduced by council president Herb Wesson, Councilmembers Mitch O’Farrell and Marqueece Harris-Dawson, and seconded by Councilmember Paul Koretz.

“When this government was created it was not created to benefit people who looked like me,” said council president Wesson. “I am proud that in one of my final acts as the first Black council president, we as a council acknowledge the city’s role of structural and institutional racism and its role in righting those wrongs with an Office of Racial Equity (ORE) that looks out for all Angelenos.”

The passage of this motion comes on the heels of a month-long phase of the embRACE LA initiative that has engaged community members through 150+ city-wide conversations about race and racism. The initiative was developed by Wesson and O’Farrell and led by Community Coalition, a grassroots social justice organization in South Los Angeles. This fall, dinners were held with the help of producing partners Advancement Project and Revolve Impact with the purpose of bringing together Angelenos to have conversations about racism and racial equity in the city of Los Angeles. The information discussed in these conversations was collected with the goal of using this data to help establish the new office. 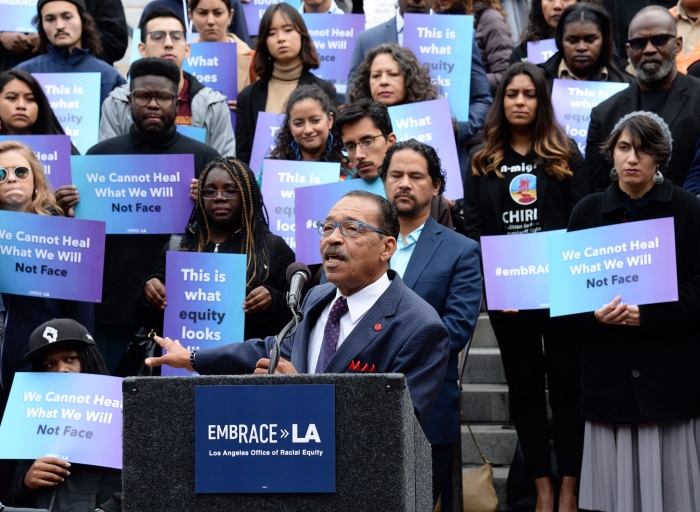 Council president Herb Wesson stands at a podium with organizers behind him on City Hall steps. (Courtesy Photo)

In surveys about the state of racial equity in Los Angeles, just 21.5% of participants agreed or strongly agreed that the city is an equitable and inclusive place to live for people of all races and ethnicities. 85% said that they supported establishing an ORE.

“This focus on fairness and equity will matter to all demographic groups that have been historically discriminated against, including Native Americans and members of our transgender community, who have also faced incredible impediments to equal opportunity and fairness in all aspects of mainstream society,” said Councilmember O’Farrell. “Today, the work that Herb Wesson and I started years ago takes an important step, and the city will staff an office to keep us focused on making sure that we incorporate equity and opportunity into our overall approach as policymakers.”

The ORE would formalize the city’s commitment to addressing systemic racial disparities. The office would have a number of duties, including working to repair harms from previous policies that created, upheld or exacerbated racial disparities, and correcting disparate outcomes seen in areas such as education, employment, wealth, housing and health. The ORE would analyze city policy and programs for the potential effects on various communities and consult with city departments to establish plans to address racial disparities within individual departments throughout the city. 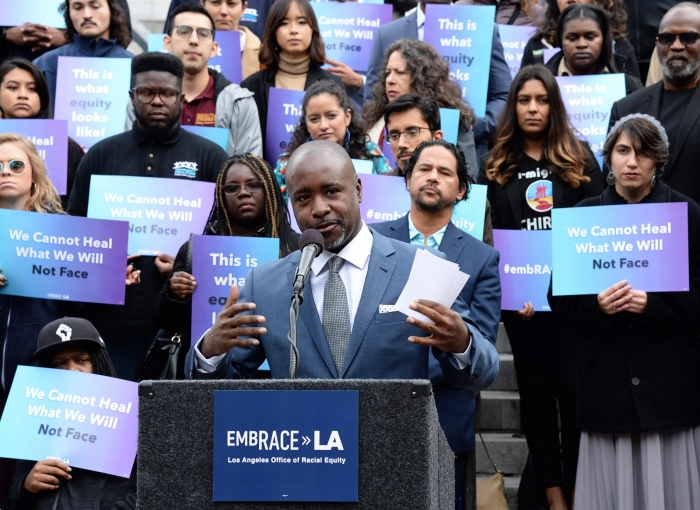 Councilmember Marqueece Harris-Dawson and City Council unanimously approves an initiative calling for the creation of an Office of Racial Equity in the city of Los Angeles. (Courtesy Photo)

“Creating the Office of Racial Equity is a critical step towards acknowledging and remediating the effects of racial bias in Los Angeles city policies,” said Councilmember Marqueece Harris-Dawson. “Disparities across housing, education, wealth, employment, and health are not accidental. They are the result of historic and systemic factors including biased and discriminatory government decisions, policies, and practices targeting racial and socioeconomic minorities. I’m proud to introduce this motion and stand with my colleagues committed to creating a more equitable city and hope the Office of Racial Equity will inspire similar endeavors from other legislators.”

“Today marks a renewed commitment by the city of Los Angeles to proactively advance racial justice,” said Alberto Retana, president & CEO of Community Coalition. “This vote is the culmination of citizens coming together throughout the city to talk with one another, share their experiences and look for viable ways to address inequity.”

The motion passed with a 14-0 vote. The next step will be for the chief legislative analyst and the city administrative officer to develop a study on the steps necessary to create the Office of Racial Equity, consulting with community partners and with the embRACE LA initiative. The report will also include an analysis of the staffing and budget required from the 2020-21 Fiscal Year Budget.