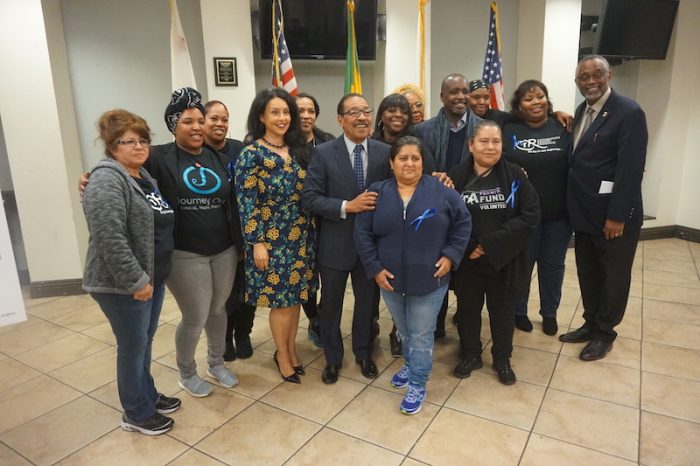 L.A. City Council, LAPD and service providers came together at a press conference to mark the introduction of improvements to the Operations-South Bureau Human Trafficking Task Force. (Photo By Brian W. Carter)

“Women and girls are being sold on our streets, in our city and that is no longer acceptable,” said Martinez. “I want to make it clear—nowhere, nowhere in our city is it ok to see half-naked girls standing in the middle of the day on any of our corners, in any of our districts selling their bodies for sex.

“That is completely unacceptable.”

“I’m here today to say to all of the men in our community … a man is a protector, a man is not a predator,” said Wesson. “I am my mother’s son, my wife’s husband and a grandfather of two young girls.

“We, as men, need to come together to make sure that [women and girls] realize their dreams, that they can go as far as their abilities and imagination will take them and that it is not okay to take advantage of children.”

Following three years of success at the Operations-Valley Bureau, Councilwoman Martinez, the LAPD, and service providers such as Journey Out, are bringing the resources, strategies, and tools that make the Valley Bureau Human Trafficking Task Force a success to the Operations-South Bureau.

“Today, what you’ve done is give us the resources so that we can look at this problem with the entire South Bureau,” said Harris-Dawson about Martinez bringing new endeavors to the South Bureau Human Trafficking Task Force.

“Unfortunately, we’ve allowed a situation where trafficking has become normalized in culture. Today, we have people on the radio, right now, who call themselves [pimps] and they have hit records and we sing along and dance along to the records.

“In a situation, where it has become normalized … the police have a job, folks who work with victims have a job—yes indeed, if we catch you pimping or if you see fit to get out of your bed at three or four in the morning and drive from wherever you live to Western Ave., or Figueroa or to Hollywood so you can have sex with a teenager—we’re going to let the world know about you.”

Operating out of Councilmember Curren Price’s 9th District, the South Bureau Human Trafficking Task Force focuses on tackling human trafficking in Council Districts 8, 9, and 10, represented by Councilmembers Harris-Dawson, Price, and Wesson respectively. Some of those strategies include changing the approach to targeting those who perpetuate the problem – the pimps and johns.

“No longer are we taking the approach that we can arrest our way out of this issue because we cannot,” said Martinez. “The approach now is to really look and be centered around victims. What can we do to rescue women and children off the street but more importantly how do we incentivize or help [victims] to be able to speak and turn [their] pimp over?

“The perpetrators are the pimps, we’ve got to get those folks off the street.”

“This issue is so important, it attacks our community in so many ways,” said Price. “It’s not just the girls or women who are involved but their families, friends, neighbors, the impact on law enforcement [and] the need to shift resources.

“We have to do all that we can to end this problem and make sure these girls and women know that we are here to support them.”

Myles is a survivor of sex trafficking and shared her story during the press conference. She is with Gems Uncovered, a faith-based organization based in Long Beach, where she is helping to turn the tide with sex trafficking victims towards a positive light. She shared what the community can do to help end trafficking in the neighborhood.

“When you know things are just not right in your gut, you know something is not right … it’s better to be safe than sorry.”

“This is not some 1970s movie ‘The Mack’,” said Wesson. “There is nothing cool about this crap. These are our streets, this is our community and these are our sisters—this is our city and we have a responsibility as men to rise up and be a true man, which is to be a protector.”

“I find healing through speaking up and letting people know this is going to get better and that there is hope at the end of the tunnel,” said Myles.