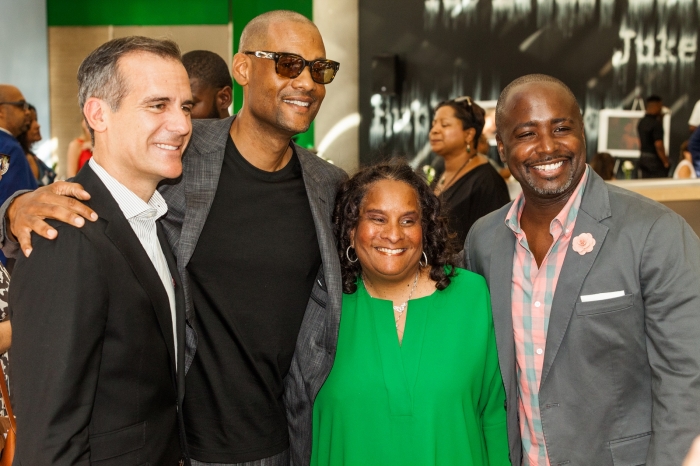 In the South Los Angeles community Karim Webb is well-known for his four Buffalo Wild Wings franchises. The Baldwin Hills location, which opened in 2011, brought new jobs to the Crenshaw District along with a fun and safe place for community, members to watch sports.

If you’d have asked him back then what he did for a living he’d say, “I sell chicken and beer.” And he’s done well building all four of his restaurants into profitable businesses – each outperforming other BWW locations nationally.

But through getting engaged philanthropically with non-profits like The Brotherhood Crusade and the California Community Foundation, he quickly realized that he wasn’t just “selling chicken and beer” he was using his restaurants as a training ground to develop people.

“I came to understand that young people saw possibility for themselves because they saw us behave in a way that is consistent with success and thought – I can do that too. They were changing because we were asking them to,” said Webb.

In 2018, when the city of Los Angeles began legislating recreational cannabis, Webb saw it as another opportunity to expand what he had done at BWW.

“One of the really beautiful things about being a BWW franchisee is – Wings. Beer. Sports. – it’s a fun place to be but we really are a platform for helping people discover what is possible for themselves and their lives,” said Webb.

That platform has now expanded to include 4thMVMT, a local firm helmed by Webb, that partners, trains and finances individuals who qualify for Social Equity to become entrepreneurs through owning retail cannabis businesses.

The goal is to provide access to equitable ownership and employment opportunities in the cannabis industry. And to address the disproportionate impact of the war on drugs in order to achieve economic parity for minority communities.

“Black and brown people own less than 1% of the billion-dollar cannabis industry yet they suffered 75% of the harm under the government’s war on drugs. And that’s unfair,” said Webb

Leveraging a new opportunity like this to help people is common for Karim said his friend and pastor, Nisan Stewart.

“He hasn’t started a cannabis company, he’s daring to address the issues and offer solutions to the pain that has been placed upon our inner city,” said Stewart.

“We have an opportunity to make change and we’d be foolish to let just anyone come in. Why not have someone like Karim who has the intelligence of an entrepreneur and the heart for caring about the city? Someone who will stand up and say no, let’s help our people,” said Stewart.

4thMVMT’s name is rooted in the Rev. Jesse Jackson’s comparison of the modern Black struggle for equality to a symphony of four movements – the final one being the fight for economic parity. Webb sees ownership as the way to reach this parity for Black and Brown communities. 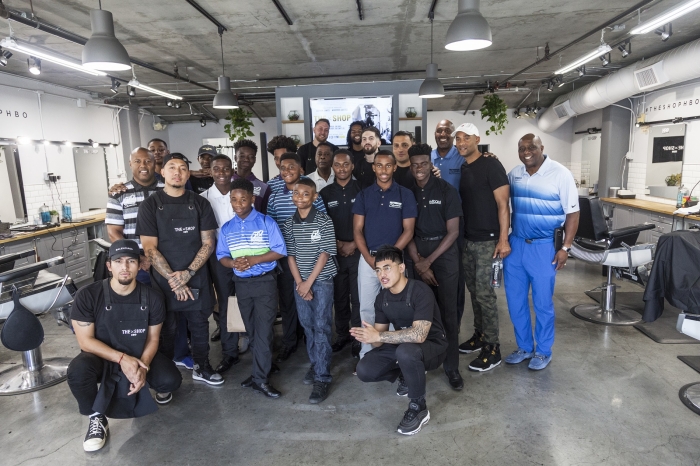 “Educational attainment, household income and health problems in our communities aren’t getting better, they are getting worse. In order to reverse that, we need something more. We need access to resources, to money. And cannabis licenses provide that access,” said Webb.

The city of Los Angeles set aside 100 cannabis licenses for “Social Equity” applicants. Which according to the Department of Cannabis Regulation is an effort “to begin to acknowledge and repair the harm caused by the War on Drugs and the disparate enforcement of cannabis prohibition.”

In order to qualify for Social Equity in Los Angeles you must be low income making less than $45,644, had an arrest or conviction for a cannabis offense or been a resident for at least 5 years in a “disproportionately impacted area.”

However, Webb contends that those who qualify are being set up to fail.

“Without the necessary resources and financing to build successful businesses Social Equity applicants will become vulnerable to predatory companies looking to buy up licenses for cheap at the first sign of trouble,” says Webb.

4thMVMT wants to bridge this gap by providing their Social Equity partners with complete wraparound services that will allow them to be competitive retail business owners in the saturated cannabis market.

The process starts with trauma-informed personal development, then an intensive 12-week business training program that culminates in a community impact initiative competition where candidates are asked to work together to create a non-profit program they’d like to see in their community.

Once the licenses are issued, 4thMVMT will assist them in vetting employees, construction build out, and negotiating wholesale product costs. It also secured real estate for each of its partners in high traffic affluent areas.

“By opening retail stores in these upscale areas, it provides the best chance for our partners, and the associated store “Sixty Four & Hope,” to be successful. It also allows for wealth to be transferred back into Black and Brown communities,” said Webb.

“We’ve had enough folks that come to our community and take the money back to their community and beautify it. We need to reverse that flow of capital,” said Webb.

“He’s coming from a pure place. Helping our people, I mean inner city, with the highlight on minorities, to elevate. That’s such a great thing that he’s doing and done. I stand with him 100%,” added Stewart.

Webb believes that strategic development of minority entrepreneurs is the path to creating an equitable America – providing people of color with adequate income to thrive in America and a real chance at building generational wealth.

And cannabis is not the only stop. Once he perfects the 4thMVMT model, Webb plans to implement Social Equity in other industries.