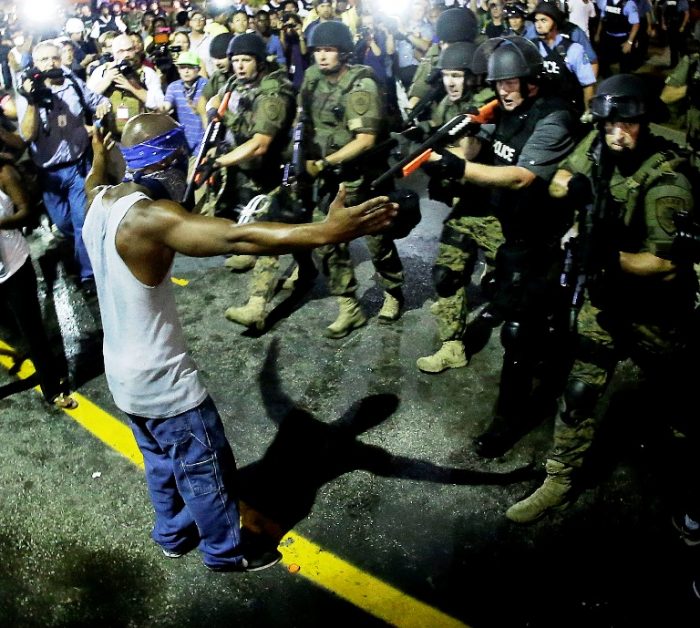 In this Aug. 9, 2014 file photo, police arrest a man as they disperse a protest in Ferguson, Mo. Police antagonized crowds gathered to protest the shooting of 18-year-old Michael Brown in Ferguson, violated free-speech rights and made it difficult to hold officers accountable, according to a U.S. Department of Justice report summary published Tuesday, June 30, 2015 by the St. Louis Post-Dispatch. (AP Photo/Charlie Riedel, File)

A federal judge has tossed out a $40 million civil rights lawsuit that alleged police used excessive force against protesters in Ferguson after the 2014 police shooting death of Michael Brown.

Autrey also concluded that the protesters ignored “repeated warnings” to disperse and that the officers named as defendants were entitled to immunity from the lawsuit.

“The record is clear that at the time of the events detailed herein, the atmosphere surrounding the arrests was extremely intense and had turned violent,” Autrey wrote. “Participants in what had turned from a peaceful assembly to unlawful assembly were advised to disperse,” but they failed to heed warnings that they be arrested for failing to leave the area as police tried to quell the unrest.

The protesters on Monday filed a notice of their plans to appeal Autrey’s ruling to the 8th U.S. Circuit Court of Appeals.

The death of 18-year-old Brown, who was black and unarmed, by white Ferguson police officer Darren Wilson led to months of sometimes-violent Ferguson protests and became a catalyst for the Black Lives Matter movement, which rebukes police treatment of minorities.

A St. Louis County grand jury declined to indict Wilson, who later resigned. The U.S. Justice Department concluded that evidence backed Wilson’s claim that he shot Brown in self-defense after Brown tried to grab the officer’s gun during a struggle through the window of Wilson’s police vehicle, then came toward him threateningly after briefly running away.

In the days immediately after Brown’s death, local police in riot gear fired tear gas and rubber bullets at protesters who refused to disperse and, at times, broke into nearby stores.

Plaintiffs in the lawsuit included a clinical social worker who said she and her 17-year-old son were roughed up and arrested after not evacuating a McDonald’s quickly enough. Others were a 23-year-old man who said he was shot multiple times with rubber bullets and called racial slurs by police while walking through the protest zone to his mother’s home, and a man who said he was arrested for filming the disturbances.