A federal judge rejected a proposed plea deal this week, between former Los Angeles County Sheriff Lee Baca and prosecutors that called for the retired lawman to serve anywhere from zero to six months in prison for lying to investigators.

U.S. District Judge Percy Anderson said a six-month sentence would “trivialize” Baca’s role in setting in motion a wide-ranging conspiracy to obstruct justice in the jail system that did “substantial harm” to the community.

“It’s one thing to lie to an assistant U.S. attorney,” Anderson said at the conclusion of the 90-minute hearing. “It’s another for the chief law enforcement officer of Los Angeles County to … cover up abuse in Men’s Central Jail.”

To impose a sentence of six months “would not address the gross abuse of the public’s trust” and would be unreasonable and unfair, the judge said.

Such a penalty, Anderson said, “understates the seriousness of the offense” and “the harm he caused by participating in a broad scheme to obstruct justice.”

Given a choice to withdraw his guilty plea to making false statements to federal investigators, keep his plea and face a more severe punishment or postpone the decision to a later date, Baca chose to have the hearing resume on Aug. 1.

Baca, 74, who has been diagnosed with Alzheimer’s disease, argued in court papers for a probationary sentence, claiming his medical condition and law enforcement career make him susceptible to abuse while in custody.

Federal prosecutors countered that the county’s former top lawman deserves six months behind bars for lying to investigators in 2013 when he said he was unaware that sheriff’s deputies were going to the home of an FBI agent to confront and threaten her over her involvement in the probe of corruption within the department.

The same year Baca committed the offense, he was named Sheriff of the Year by the National Sheriffs’ Association.

The rejected plea agreement — which one of Anderson’s colleagues on the federal bench recently called “troublesome” — was widely seen as too lenient in a case where the sheriff’s department’s former second-in-command, Paul Tanaka, was sentenced to five years in prison.

Hundreds of letters in support of probation for Baca were filed with the court. 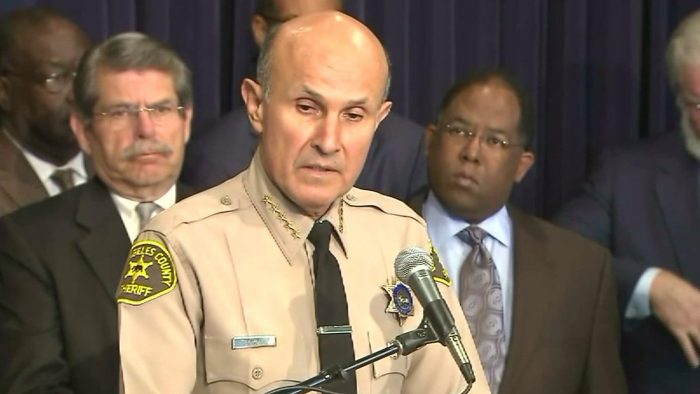 Baca pleaded guilty Feb. 10 after denying for years that he had played any role in the wide-ranging scandal that stained the department and led to his retirement.

“I made a mistake and accept being held accountable,” Baca said in a written statement issued on the courthouse steps following his plea hearing.

According to the plea agreement, Baca agreed not to contest other allegations leveled by prosecutors, including that in 2011 he directed subordinates to approach the FBI agent, stating that they should “do everything but put handcuffs’ on her.

Prosecutors also accused Baca of lying about his involvement in hiding a jail inmate from FBI investigators. Baca, they alleged, ordered the inmate to be isolated, putting Tanaka in charge of executing the plan.

In addition, Baca falsely claimed he was unaware that some of his subordinates had interrupted and ended an interview FBI agents were conducting with the inmate, who was working as a federal informant, prosecutors alleged in the court documents.

Baca retired in 2014 at the height of the federal probe. He had been sheriff since December 1998.

Prosecutors have said that Baca lied to investigators to either avoid “political fallout” or to avoid more severe criminal charges.

As for Baca’s claims that he could be in danger of abuse if sent to a federal facility, prosecutors wrote that the Bureau of Prisons houses many “well-known inmates” who are well protected. In any case, the ex-lawman would not be jailed with violent criminals, prosecutors said.

The BOP currently houses some 300 inmates with severe forms of cognitive impairment resulting from dementia or Alzheimer’s, and they are treated and kept safe, according to prosecutors.

At a May sentencing hearing in a related case before U.S. District Judge Beverly Reid O’Connell — whose courtroom is opposite Anderson’s — the judge mentioned the Baca plea deal in the context of the tough sentence prosecutors were seeking for two deputies found guilty of a similar charge.

O’Connell described the agreement with Baca as “troubling.”     When questioned by O’Connell about the difference in sentencing recommendations, Assistant U.S. Attorney Jennifer Williams said the cases were “apples and oranges,” and noted that Baca had turned himself in, admitted guilt and had not been accused of using excessive force himself.