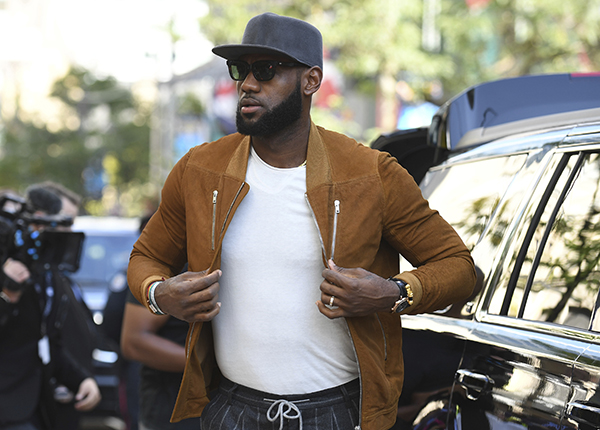 FILE – In this Sept. 9, 2017, file photo, executive producer LeBron James attends a premiere for “The Carter Effect” on day 3 of the Toronto International Film Festival at the Princess of Wales Theatre, in Toronto. LeBron James has gone from hot in Cleveland to high on Hollywood. James had movie and TV projects gestating long before he came to California to join the Los Angeles Lakers, and has the star power to now have a shot at a lot more. (Photo by Arthur Mola/Invision/AP, File)

It’s official. LeBron is a Laker.

The Los Angeles Lakers announced the signing of LeBron James as a free agent Monday night, confirming the seismic shift created by the four-time NBA Most Valuable Player’s decision to leave Cleveland for the 16-time champion franchise on the West Coast.

James’ representatives at Klutch Sports Group tweeted a photo of James signing his contract with Lakers general manager Rob Pelinka. James’ agency already announced last week that the superstar had agreed to a four-year deal worth $153.3 million with Los Angeles.

The Lakers have missed the playoffs in a franchise-record five consecutive seasons, while James has played in the past eight NBA Finals with the Miami Heat and the Cleveland Cavaliers, winning three titles.

The 33-year-old budding entertainment mogul immediately becomes the focus of the Lakers franchise and a possible foundation for the NBA’s next superteam, depending on whether James and the Lakers can persuade more superstars to join him in the next year or two.

Magic Johnson, the Lakers’ president of basketball operations, called James “the best player in the world” in a news release.

“He loves to compete and is an awesome leader who is about winning and making sure that his teammates are successful,” Johnson said. “The Lakers players are excited to have a teammate who has been to nine NBA Finals. It’s a huge step closer to returning the Lakers to the playoffs and to the NBA Finals.”

James is coming off one of his greatest NBA seasons, playing in all 82 regular-season games for the Cavaliers while finishing third in the NBA with 27.5 points per game and hitting career highs with 8.6 rebounds and 9.1 assists. He then carried Cleveland to its fourth consecutive NBA Finals, where the Cavs were swept by Golden State.

“This is a historic moment for the Lakers, and we could not feel more grateful and honored,” Pelinka said. “When LeBron James _ a perennial NBA MVP and champion who is playing at the most astonishing levels of his career _ chooses to join the Lakers, it serves as the ultimate validation for what we are building here. However, we all know that the work is not yet done.”

James’ arrival is indeed validation for Johnson and Pelinka, who took over the Lakers’ front office in February 2017 with a specific plan to rebuild the franchise by persuading established superstars to join as free agents.

But they didn’t even get a meeting with star scorer Paul George before the Southern California native re-signed with Oklahoma City, and their efforts to acquire disgruntled two-way superstar Kawhi Leonard from San Antonio haven’t borne fruit so far.

The Lakers don’t appear to be planning a public event to welcome James to Los Angeles, where he already owns multiple homes and spends summers with his family.

But Blaze Pizza _ the growing pizza chain in which James is an investor _ announced a three-hour pizza giveaway on Tuesday to welcome James to LA.

LeBron responded with a tweet , his first since June 26: “Haven’t been to a pizza party in a minute … Culver City?”