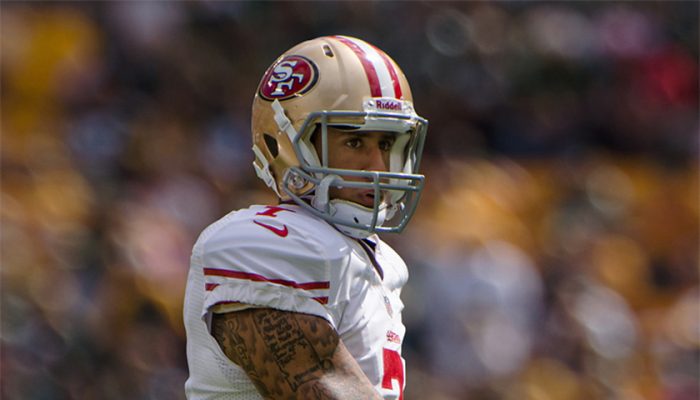 Chris Bennett, the co-publisher of The Seattle Medium, challenges the Black community to support Colin Kaepernick (pictured) and current NFL players that continue to protest police brutality. This photo was taken during the San Francisco 49ers vs. Green Bay Packers game at Lambeau Field on September 9, 2012. (Mike Morbeck/Wikimedia Commons)

And yet, as you read this article today, there are pro football players that have taken a stance against oppression, police brutality and the killing of Black people by law enforcement officers all across this country. Yet, these athletes are under attack by the media, by “fans” who claim that they have ruined the game of football, because they will not stand during the national anthem…and yes, the players have even come under attack by the 45th occupant of the White House.

The Black Lives Matter movement and the many of the NFL players are standing up (or kneeling) for justice and “just us.” We are demanding justice for things that happen to just us. We demand justice for the racial profiling that happens to just us. We demand justice for the excessive force that is used against just us. And we are demanding justice, on behalf of millions of voiceless African Americans all across the country, for the lives that have been lost as a result of law enforcement officers shooting us (unarmed, Black Americans) at alarming rates.

Numbers don’t lie, and videos don’t lie either. Black men are killed by police officers in extrajudicial shootings at much higher rates that far outweigh the rate of that White men are shot and killed by police officers, which indicates to me that these killings repeatedly happen to just us; and think about the number of videos that we have seen that show Black people gunned down, choked out, manhandled and beaten; while at the same time we see videos of Whites blatantly disrespecting police officers and daring them to do something to them, and those suspects are able to walk away unharmed.

In protesting these atrocities, Colin Kaepernick chose to take a knee during the national anthem, because he didn’t want to stand up for the flag of a country that oppresses Black people and people of color. In fact, Kaepernick was quoted as saying, “To me, this is bigger than football and it would be selfish on my part to look the other way. There are bodies in the street and people getting paid leave and getting away with murder.”

For taking such a stance, Kaepernick is no longer employed as an NFL player. We hear all the excuses about why he does not have a job as a quarterback in the NFL. You can believe the excuses if you want, but I would challenge you to answer this question: Do you honestly want to see Colin Kaepernick playing quarterback against your favorite team on Sunday? Your honest answer would probably be “No,” because despite any flaws or inconsistencies that he may have in his game, Colin Kaepernick is a game changer. He is a legitimate dual threat quarterback, who can find his way to the end zone anytime he touches the ball. So, why is he unemployed? You can answer that question for yourself.

As a result of what many believe was the blackballing of Kaepernick by the NFL, many people across this country, many of them Black women, decided to boycott the NFL this season; and the boycott is and was successful, so much so that the NFL, mainstream media and the 45th occupant led people to believe that the low ratings of NFL games this season were a result of White men not watching the NFL, because Black players were protesting that national anthem. Then, the 45th occupant of the White House, in his puppeteering ways, stepped forward and said that the NFL should fire anyone, who refuses to stand for the national anthem, and accused those who chose to kneel during the national anthem of disrespecting the flag and being unpatriotic. Black folks took offense and I believe that they decided to watch the games in protest to “45”; I bet the ratings increased, too.

Now, fast forward to Dallas Cowboys owner Jerry Jones stating that players on his team, who do not stand for the national anthem will not play, and “45” praises him for doing so. Ironic? I don’t think so. Don’t let them fool you, “45” and NFL owners have been joined at the hip in the process from the very beginning. The 45th occupant of the White House carried the water of the NFL owners, helped sway some sort of public opinion against the players and now the owners feel empowered to bring down their oppressive hammers on the players. The 45th occupant of the White House will take credit for bringing “law and order” to the plantation, and the NFL owners will walk away with little or no blood on their hands.

The real story is that a handful of players have stood up for what they feel is right. Now the question is, what is the African American community going to do to support them? Do you have the courage to turn the channel when your favorite team(s) play on Sunday? Do you have the courage to publicly tell people that you support the players who choose to take a knee for justice and not just us? Do you have the courage to proudly wear the jersey of Colin Kaepernick, Michael Bennett or any other player who chooses to kneel or sit during the national anthem? Do you have the courage to start your own personal social media campaign supporting those players who take a knee to say that Black lives matter just as much as any other lives in this country? Are you willing to show your unwavering support for those who are standing tall by taking a knee during the national anthem? Will you write a letter, email or tweet to the NFL, the 45th occupant of the White House and your congressional delegation expressing your concerns about this issue? Do you have the backbone to stand up and advocate for freedom, justice and equality for those who are no longer here to speak for themselves?

For those of you who choose to protest, here is the best way (I believe) to do so:

Through the eyes of an ink barrel, may peace be unto you.

Chris B. Bennett is an award-winning journalist and co-publisher of The Seattle Medium newspaper. You can follow him on Twitter @The_inkbarrel.