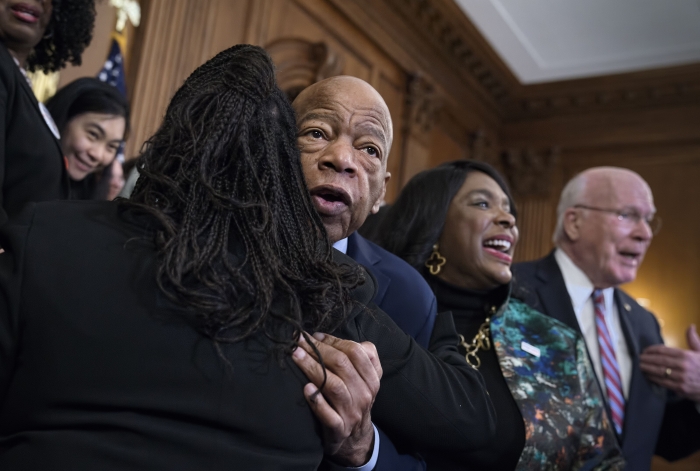 Civil rights leader Rep. John Lewis, D-Ga., is hugged as House Democrats gathered before passing the Voting Rights Advancement Act to eliminate potential state and local voter suppression laws, at the Capitol in Washington, Friday, Dec. 6, 2019. At right is Rep. Terri Sewell, D-Ala., who introduced the bill and who represents Selma, Ala., a city that was at the forefront of the 1960s civil rights movement. They are joined at far right by Sen. Patrick Leahy, D-Vt. (AP Photo/J. Scott Applewhite)

The Democratic-controlled House approved a bill Friday that would restore key sections of the Voting Rights Act that once required officials in all or parts of 15 mostly Southern states to receive federal approval before making changes to the voting process.

The bill would amend the 1965 law to impose new obligations on states and local jurisdictions, essentially reversing a 2013 Supreme Court decision that tossed out a “pre-clearance“ provision that determined which jurisdictions needed federal oversight of elections.

The bill was approved, 228-187. Veteran Rep. John Lewis, D-Ga., an icon of the civil rights movement, announced the tally in a sign of the importance Democratic leaders place on the measure.

Just one Republican, Pennsylvania Rep. Brian Fitzpatrick, joined Democrats in voting for the bill. It now goes to the Republican-controlled Senate, where it is unlikely to move forward.

Lewis and other supporters said the measure would help prevent voter suppression in the South and other areas by developing a process to require states and localities with a recent history of voting rights violations to pre-clear election changes with the Justice Department.

Strict voter registration requirements, polling place confusion and other obstacles faced by Georgia voters last year show why federal oversight of elections is still needed in places with a history of discrimination, supporters said. Problems also were reported in Florida, where elections officials came under withering criticism for their handling of a legally required recount in close races for governor and U.S. Senate.

“No right is more precious to our citizenship than the right of all Americans to be able to vote,” said Rep. Terri Sewell, D-Ala., the bill’s chief sponsor. “When Americans are not able to cast their ballots, their votes are silenced.”

The White House opposes the bill, calling it an example of federal overreach. The Democratic-backed measure would give the federal government “too much authority over an even greater number of voting practices and decisions made by states and local governments without justifying the current needs for such policies,” the White House said in a statement.

The Supreme Court has already ruled that similar restrictions imposed by Congress on states and localities are unconstitutional, the White House said.

Sewell said the 2013 Supreme Court ruling in Shelby v. Holder has led to renewed discrimination against minority voters in her state and throughout the South. Some of the laws were passed in the name of combating voter fraud, but Sewell said the real issue was voter suppression, not fraud.

The laws passed by Republican-leaning states were aimed at “suppressing the voice of certain Americans, and that’s un-American,” Sewell said on the House floor. Whether African Americans in Georgia or Native Americans in North Dakota, members of minority groups have continually faced barriers to voting, she said.

“This is a seminal piece of legislation that will restore, for the people, the right to vote,” Sewell said, adding that Republicans and Democrats alike “should be making sure it’s easier to vote, not harder to vote.”

Rep. Rodney Davis, R-Illinois, said he agreed with that sentiment. “Every eligible American who wants to vote should be able to cast a ballot, “he said, calling the Voting Rights Act “a great example of a bipartisan solution that is working today to protect Americans from voter discrimination.”

But Davis said Sewell’s bill would do more than reauthorize the voting rights law. “Instead, it would require the Department of Justice to clear every election law in this country, taking that power away from states.”

Democrats have approved four bills addressing voting rights or election security since taking the majority this year, “and all of them have one common theme: federalizing elections,” Davis said. The bill approved Friday “is simply more of the same.”