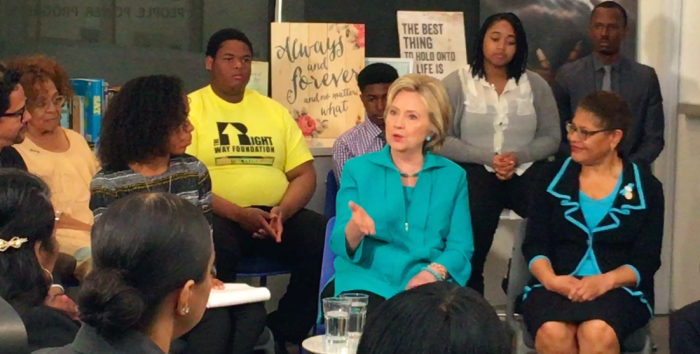 U.S. Secretary of State and presidential candidate Hillary Clinton was welcomed with open arms at South L.A.’s Community Coalition (COCO) on May 24.

As part of National Foster Care Awareness Month activities, Bass encouraged the Democratic Presidential candidate to visit the organization and hear from caregivers themselves.

As she toured the state-of-the-art facilities, Clinton heard from grandparents, youth, and advocates of children in the child welfare system.

Approximately half a dozen cheerful youth welcomed her to the Sylvia Thomas Youth Technology Center.  Afterward, she ventured into a conference room, where she heard about the challenges of grandparents raising their grandchildren without enough resources.

“I’m raising my great-granddaughter.  She’s seven years old.  She sent you a message.  She said, ‘Don’t disappoint us,” said great-grandmother Debra Lee, as she fought back tears.

“I wouldn’t trade this situation for nothing in the world, but there are so many kids out there, and you know this, that we really have to fight for, because they need the help,” Ms. Lee continued.

Ms. Lee said she is one of the lucky relative caregivers, fortunate enough receive financial assistance.  Many families do not receive aid, she said.

“But you’re also one of the leaders that’s helping to organize the other caregivers,” Rep. Bass said, lifting Ms. Lee’s spirits.

She advocated for kinship as a New York senator, Clinton told Ms. Lee and several others gathered around the conference table.

Clinton said she also worked to get special satisfied housing, so grandparents could live together to support each other.

She further stated she recognized the difficult economic situation grandmothers find themselves in, and that her goal is to find more safe spaces for them.

COCO has developed the Families Helping Families program to connect relative caregivers to services that meet their needs.  In addition to financial assistance, those include mental health services, educational support, legal aid, support and network groups, and leadership opportunities.

One COCO advocate explained to Clinton that part of the problem has been ensuring there are services on the front and back ends for families, rather than just when they are in crisis.

“That is exactly what we need to do more of, and something that both Karen and I have worked on for a long time.  She is really leading the charge in Congress now, heading up the Foster Care Caucus and introducing legislation … and we somehow have to do a better job, because a lot of kinship caregiving situations, it just happens to a family,” Clinton said.

She commended families for taking on that responsibility.  “We’ve got to do more outreach so that grandmothers, aunts, uncles, and older brothers and sisters, whoever it is that’s taking that responsibility quickly gets in to have an assessment done so that they can get the help they need, so that they can keep that child and provide whatever support the child needs and you need,” Clinton stated.

She then moved into the Karen Bass Commuity Hall, where she participated in an intimate dialogue with more COCO members and community groups.

“We’re so honored to have Madam Secretary Clinton here with us to talk to us about a very important topic in our community, foster care, which is such an important issue, we look forward to contributing to the national conversation and putting forth some great solutions,” Retana said.

Rep. Bass said she was excited to bring Clinton to COCO.

“I know everybody knows this has been a signature issue for her from straight out of law school, to being first lady, to being a senator, secretary of state, and I’m convinced, our next president,” Bass said.

Before Clinton addressed the group, a recent college graduate, now organizer with COCO expressed the difference between her failing as a foster care youth or excelling through high school and college was being able to live with her grandparents.

“If I could ever call myself successful, I know that it is because of them.  If my grandparents hadn’t stepped in, I would have been put into the foster care system and I wouldn’t be where I am today.  I know that I am not the only one,” the young woman said.