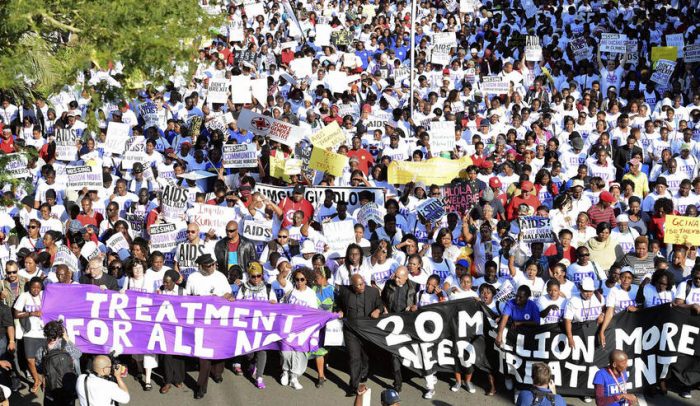 July 18, 2016 (GIN) – A massive turnout of activists, delegates, doctors and public health experts is settling in for this year’s International AIDS Conference in Durban, South Africa, where the good news is better survival rates thanks to life-saving medications.

People living with HIV will be among the over 18,000 attendees and will figure prominently in many of the sessions. Keynote speakers include UN Secretary-General Ban Ki-moon and Cyril Ramaphosa, South Africa’s deputy president.

Under the banner “Access Equity Rights Now,” the conference will highlight the latest accomplishments and challenges in a rapidly expanding area of scientific inquiry that few could have imagined at the first Durban conference.

Sixteen years ago, AIDS organizers in Durban were facing a brick wall of denialism. Then-President Thabo Mbeki dismissed AIDS as a disease of western homosexuals. Africa didn’t have the virus causing AIDS, he said, and prevention could be supplied by good hygiene, antioxidants and adopting “simple measures of nutrition.”

Since then, the argument for life-saving antiviral drugs (ARVs) has been won and 17 million people are now on treatment that keeps the virus at bay. But 36.7 million people live with HIV, according to UNAIDS, meaning that fewer than half of those who need the drugs are getting them.

With just under 2 million people becoming HIV positive every year, public health experts and activists at this year’s Durban AIDS conference fear the epidemic may slip out of control once more.

Girls aged 15-19 are a particularly worrying population group – nearly 2,000 are newly infected every week. By the time they reach age 20, young South African women are four times more likely to have contracted HIV than young men their age.

To some, the many years of AIDS conferences has raised questions about their usefulness. This concern was addressed by Professor Mzi Nduna of the University of the Witwatersrand’s Department of Psychology in an interview.

“Perhaps we need to relook at the regularity and repetition of these conferences,” said Prof. Nduna. The same people tend to attend national, regional and international conferences on this issue. This selective attendance is created by access, or lack thereof, to funding.

“This model excludes many people who work in the field of HIV/AIDS and could participate meaningfully in the conference. It also results in presenters talking only to each other in front of small audiences.

“It’s important to change the faces of attendees and open up opportunities for participation,” she stressed. Scientists can share their recent findings and activists can engage with science in a way that’s not usually possible.

Prof. Nduna reflected on Women Now! – a meeting she recently attended in Durban. “It was a vibrant space where African women from all over the world gathered to share information about their HIV prevention and treatment programs. Women agreed in this meeting that “our stories are our data,” a statement made in response to the marginalization of the black women’s narrative in the HIV/AIDS scientific world.

“This statement resonated with us all. As the most infected and affected sector of the population, women need to re-appropriate the narrative of the HIV/AIDS epidemic and be at the center of responses addressing their prevention and treatment needs. I am hoping that this will be carried through and beyond this 21st International AIDS Conference.”