Eddie Segura (4) and Latif Blessing (7) both scored in LAFC’s win over the Red Bulls. (Photo by Robert Torrence)

On Sunday, August 11, LAFC hosted the New York Red Bulls at Banc of California Stadium during a crucial stretch of the regular season. The Red Bulls, one of the stronger teams in the East, is still looking to make their playoff push while LAFC strive to maintain their dominance in the West.

The Red Bulls, once the most feared team in the league, have fallen on hard times ever since losing their academy superstar Tyler Adams to the Bundesliga in Germany coupled with the aging of their goal-scoring machine in Bradley Wright-Phillips. LAFC looked to take full advantage.

In the 23rd minute, Jordan Harvey scored his first goal for the Black and Gold off a Carlos Vela free kick, making a clever run in front of the goalkeeper and heading the ball into the top right corner for the 1-0 lead.

Just minutes later in the 25thminute, LAFC scored yet again, this time on a well-worked team goal. Atuesta to Beitashour to a streaking Blessing to double the lead for LAFC at 2-0. However, after LAFC’s second goal, the Reb Bulls started to press.

In the 28thminute, New York nearly scored if it wasn’t for a brilliant goaline clearance off the head of Steven Beitashour. But the Red Bulls would find their goal soon enough in the 42ndminute, when midfielder Cásseres blasted a ball past Tyler Miller to disintegrate the clean sheet. 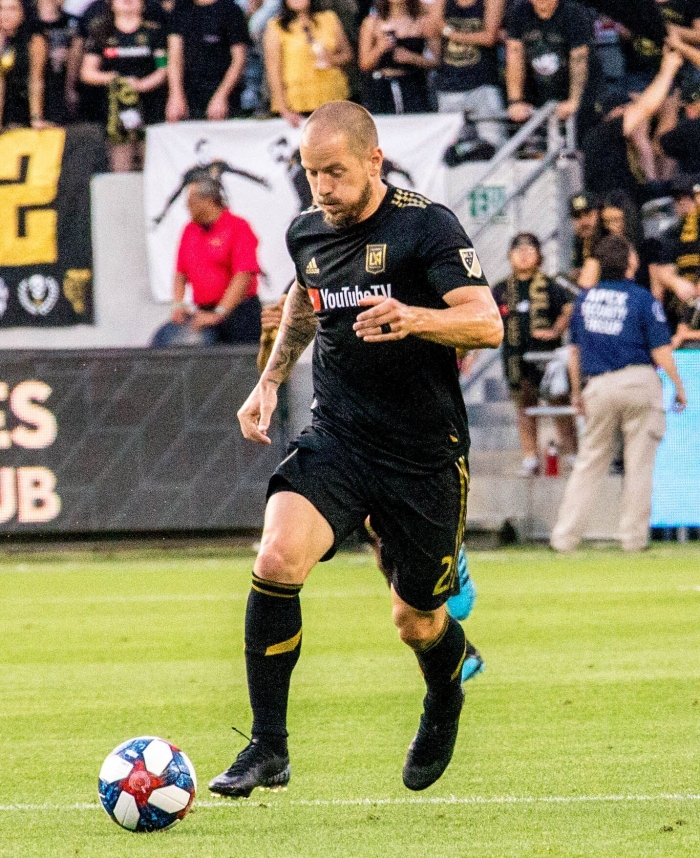 Jordan Harvey Scored his first goal for The Black and Gold. (Photo by Robert Torrence)

New York was not done yet. Seconds before halftime, the Red Bulls equalized 2-2, completely deflating the stellar first half hour for LAFC.

The second half would fare much better for the Black and Gold. The team thought they found their tiebreaker just five minutes into the second half off of stellar play from Adama Dimande and Mark-Anthony Kaye, who connected seamlessly for the apparent third goal,, however the goal was not given after a video review deemed there was a foul in the buildup.

But LAFC would find their third goal soon enough. In the 61stminute, Atuesta mad a brilliant run into the box and was hastily taken down by a Red bull defender and a penalty given immediately. Vela converted with ease to make the scoring 3-2.

LAFC defender Eddie Segura found his first goal for LAFC in the 72ndminute on a nearly identical goal to Harvey’s in the first half on a Carlos Vela free-kick to put the Black and Gold up 4-2 and out of reach for the Red Bulls.

From the start of the match, LAFC did a masterful job of controlling the tempo of the game, something they do better than just about anybody else in the league. It is apparent that Bob Bradley’s side likens the teams passing and tactical strategy to that of Barcelona’s Tiki Taka playing style, keeping a compact triangle around the ball at all times and putting immediate pressure on the ball on turnovers as Red Bulls found themselves having trouble getting on the ball the entire game.