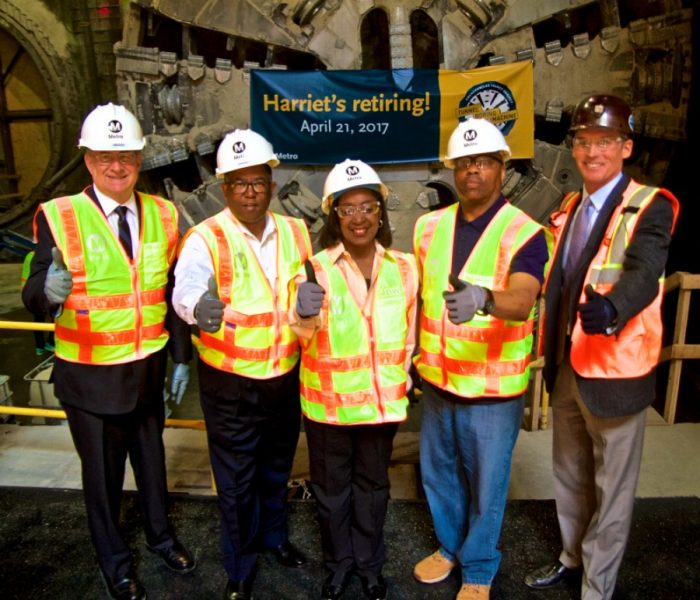 Harriet began excavating the first of the two rail tunnels under Crenshaw Boulevard on April 26, 2016. The TBM arrived at Leimert Park Station on October 20. Excavation of the second tunnel began on November 29 and was completed April 6.

The 950-ton, 400-foot-long TBM advanced an average of 60 feet a day through soil and rock under Crenshaw Boulevard. Installation of rail tracks has begun in the southbound tunnel. The 8.5-mile light rail line is scheduled to open in fall 2019.

“The end of tunneling is a major milestone for the project and I look forward to this new rail line helping residents from the Crenshaw community travel by transit to destinations across the county,” said Metro Board Chair John Fasana. “That will soon be possible thanks to the fine work of the crews who manned Harriet over the past year.” 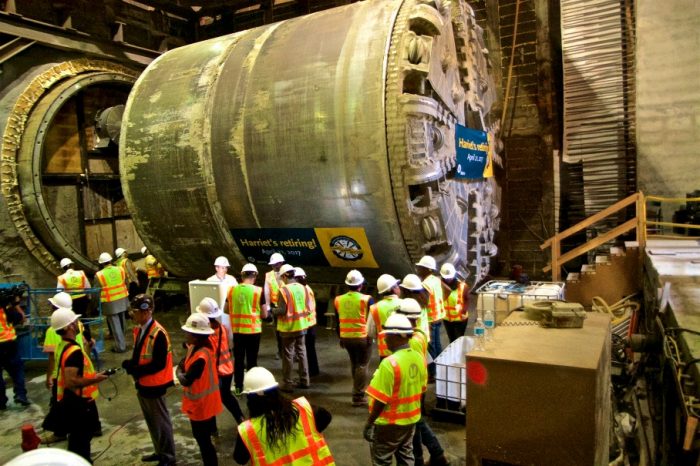 The TBM was named after Harriet Tubman, the famous African-American abolitionist and humanitarian who helped slaves escape the South using a network of safe houses known as the Underground Railroad. A local student suggested the name as part of a contest held by Metro.

“The path we blaze today will be our legacy tomorrow,” said Los Angeles County Supervisor and Metro Board Member Mark Ridley-Thomas. “Harriet, our tunnel boring machine, has done her job, so well, that in 2019, Angelenos will be able to travel from Exposition Boulevard to Leimert Park within a few short minutes.”

A ninth station — to be built separate from this project — will be located at Aviation Boulevard and 96th Street and will be the transfer point between Metro Rail and an automated people mover that will serve the LAX terminals. Los Angeles World Airports is building the people mover and has targeted a 2023 completion date.

“We all know that construction is a messy business but with the arrival of Harriet to Leimert Park we are beginning to see the light at the end of the tunnel,” said Metro Board Member Jacquelyn Dupont-Walker. “The small mom-and-pop businesses that have been through a lot of hardship during the construction period will soon reap the benefits that a project like the Crenshaw/LAX can bring to our communities.”

“This Measure R project will become a reality in the fall of 2019 will be a vital component of Metro’s transit revolution,” said Metro CEO Phillip A. Washington. “And this project will join other transit, road, walking and bike projects funded by Measure R and Measure M that will transform the Los Angeles urban landscape.”